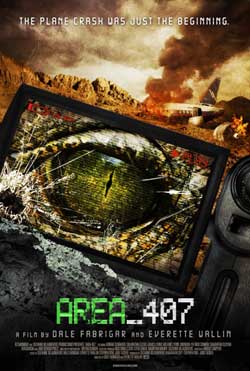 Survivors of an airplane crash find themselves within the borders of a government testing area and pursued by predators.

“Area 407” is the latest arrival in the cinema verite game. In many ways, the film is to the level that I “expected” “Chernobyl Diaries” to be. But as they say, Chernobyl Diaries” didn’t live up to expectations. “Area 407” does have a fair amount of interesting qualities to it. Some of those may give you headaches while others are very much in line with the acceptable shaky footage films these days. The shaky footage in “Area 407” is pretty shaky, so if that kind of stuff bothers you then maybe it’s not your cup of tea. 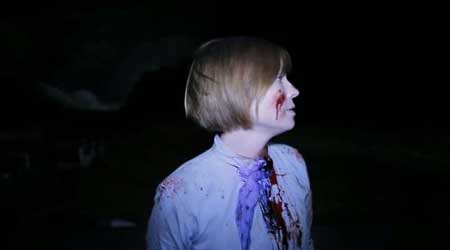 I did however away really liking this film that satisfied my need for a good ending. Now the usually spoilers would be withheld for review but the cover art illustrates the obvious… bad lizards things. “Area 407” also points to a certain curiosity. That being….what if a plane crashes into a top secret government area? What if that happened in our own Area 51? Would the survivors see anything they shouldn’t? Would they be escorted off the premises or at least be given aid from the military? I like this idea and from the looks of it, directors/ writers Dale Fabrigar and Everette Wallin did to. 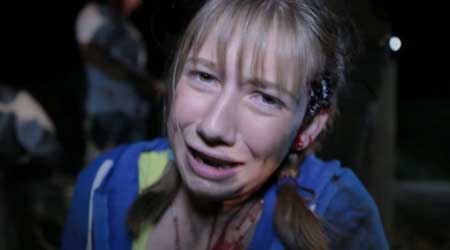 A plane takes off containing your usual batch of travelers. 2 sisters are flying, of which one seems to be quite obsessive about filming everything and everyone aboard. The stewardess is professional and courteous (she keeps to the book). One of the passengers, Charlie is quite annoying, to the point of almost being escorted off the plane, and then rounding off things are a young couple, a photographer, and an assorted mix of other travelers. 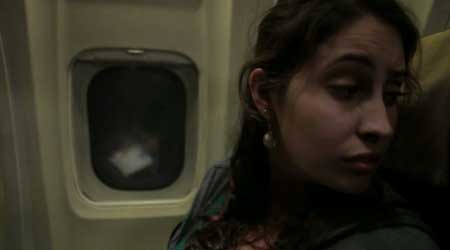 Trish (Abigail Schrader) feels compelled to film every instance of her plane trip. The constant shooting actually is starting to annoy more than it entertains, though she continues despite the efforts to sway her from her childish needs. As things get rolling the plane encounters turbulence. This turbulence develops into a bigger mess…one that crashes the plane separating its back fuselage from its front. In short, most die withthe back end of the plane leaves the key survivors to finish out the film. This whole sequence is actually shot quite well with a heavy load of panic, disarray, cuts and bruises, and a somewhat believable on camera action crash. In short, the filmmakers really nailed this sequence to a T, despite it being a camcorder recording it all. 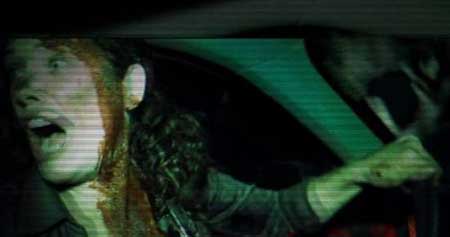 The crew and passengers stagger from the mess each with various amounts of bruising to deal with. As they gather theory thoughts, one hears a strange animal noise in the distance. They run for cover but one gets pulled from them and eaten. The pitch dark night and the sounds of predators lays a perfect foundation for unexpected consequences. Ones that have them running for their lives. With turmoil comes a bit more background from each who take to cover in an old shack nearby. Things get tense while one is revealed to an air Marshall who hopes to get them to safety.

There is not alot to tell from this point as the film is designed to bring tension thru the camera eye and the ordeals of this group. We catch a glimpse or 2 of a tail and teeth but it’s not till later till we get the full reveal. As a found footage film (which is indicated by the classified title card), “Area 407 works extremely well. Those 3 elements of… military area, a crash, and a dangerous predator/s are a pretty solid foundation for what initially feels like the first episode of “Lost”. Do I think this is “Paranormal Activity” scary? Not quite, but it does provide the necessary thrills to be a fast moving horror thriller. Again this might be a letdown if not for the twist ending. Films of this nature seem to do the best when they rightfully end on a clever note. So for the sake of my own impression I’m calling this one “cleverly tense” 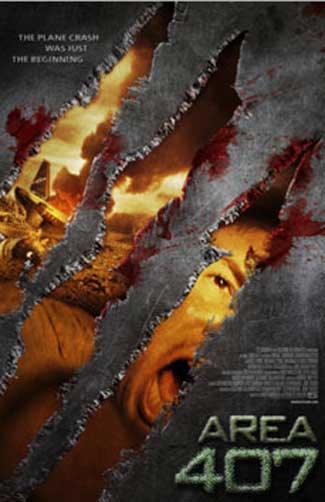 The movie was filmed in Santa Clarita, California. In research it was noted as being filmed in 5 days with an entire adlibbed script…not bad!