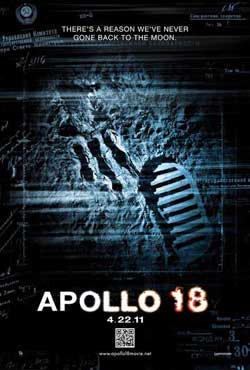 Decades-old found footage from NASA’s abandoned Apollo 18 mission, where two American astronauts were sent on a secret expedition, reveals the reason the U.S. has never returned to the moon.

If you found yourself confused with the footage aspect and adverts, rest assured this film is just fiction. It also is entirely shot in POV found footage style aka “cinema verite”. It stars 3 actors, one of which you’ll recognize from the Sanctuary series Ryan Robbins (that skin walker techie fellow). With a web site already in place (www.lunartruth.com/), this film production is bent on trying to lure a few believers. In fact I recall seeing the web address flashed per title intros more than a few times. Great marketing? Perhaps! 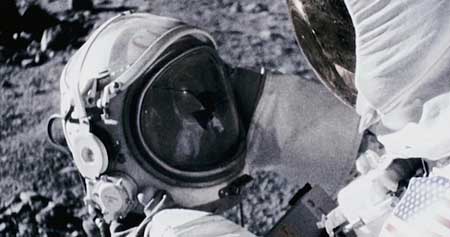 I found it funny though that others would check out fake website on a fake film. I suppose we all are optimists deep down and want “something” to believe in.

The headcount consists of only 3 with the credits reading like so: Warren Christie as Benjamin Anderson Lloyd Owen as Nathan Walker, Ryan Robbins as John Grey

This little wiki tidbit says thing pretty well: The film’s premise is that the officially canceled Apollo 18 mission was actually launched in December 1974 but never returned, and as a result the United States has never launched another expedition to the Moon.”

When the crew lands on the moon, they are under the assumption that due to politics an expedition was needed to save face in the world’s view. In other words, they need to be the first and need to beat Russia. That plan actually gets a little surprise when they discover that a Russian spacecraft had landed there prior to them. Though that’s not the major concern. The concern is that the space ship is empty. 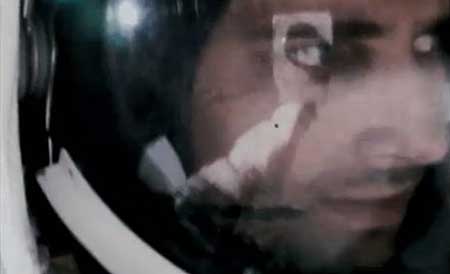 There is alot of surprise in the way of how the story evolves just using the internally placed cameras. The rest of the footage is shot when they leave to investigate.  John Grey stays in orbit with the ship while his 2 colleagues Benjamin and Llyod head on down to walk around and pick up rock samples. The footage is designed to show how things progressed and what kind of trouble the team ran into. Communication with the home base “DOD” also paints an unfriendly picture of how things work in government. However, there is some intended terror here that unrolls in the course of the event. Notice I said “intended”.

Now if you didn’t get the message here, it’s that beyond the film itself “Apollo 18” is suggesting a cover up which mirrors several of its previous missions (real missions). This time though it’s aliens on the moon. Now at the time of this review, there has been so many clips that there really isn’t much to giveaway that hasn’t already been seen. Though the big question comes in the form of, “Found footage…is it any good?” Has the film stirred up more interest in previous missions and their truthfulness? You betcha. 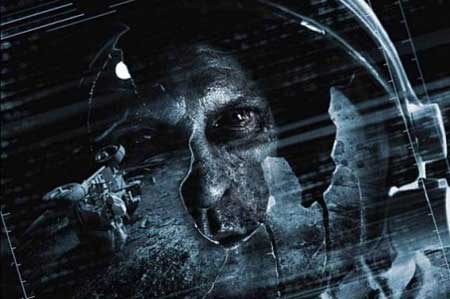 By now, with “Paranormal Activity” going on to its release #3, the public has been fairly warmed up to this style. The concept is clever, it’s a bit different and its got some political paranoia ties wrapped inside. My expectations were high, but at the end, I was worn out, tired and not that impressed. Now if you still insist on seeing this, then the term moon rocks will make sense. In short they encounter parasites that seem to infect their hosts. Beyond that I’ll save a few of the details for rental watch.

As a reviewer, we have to call em like we see em, and I just thought this was not up to the price of admission. I appreciate the moon mission inclusion, and the overdone-but-familiar marketing style for this release, though the practical effects realizations were appropriate but just not that terrifying. If a film is marketed with scary posters and clips, and then done in that cheap POV style, it better well be scary. Scary was lost on just ordinary and blase.

Apollo 18 is now available on Bluray from Anchor Bay