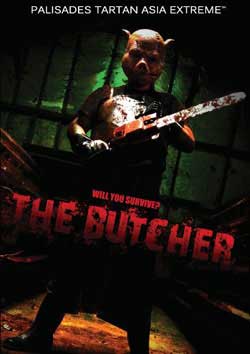 Relentlessly gruesome, South Korean filmmaker Kim Jin-Won’s torture flick chronicles the making of a snuff film from two perspectives: that of the sadistic producers and that of the unfortunate “stars.” Their terror captured through vérité-style camera work, the victims are made to endure the agonizing screams of their fellow captives before meeting their own grim fate at the hands the titular butcher in his bloody abattoir..

Chances are you may have a heard thru the grapevine that “the Butcher” is the ultimate extreme. If not, then you soon will. I see alot of films and “The Butcher” is one of those that easily stands as one of the most atrocious films ever created. I’m not surprised though its of Asian origin. In fact my top 10 list fpr atrocities would all come from Asian original for that category. Even so with the onslaught of productions that arrive daily from the industry, “the Butcher” has its own style and approach. The cover itself boasts that the film is too brutal and shocking to be released in its own country. How is that? Well this is not for the everyday horror viewer and certainly not for the every day viewer. 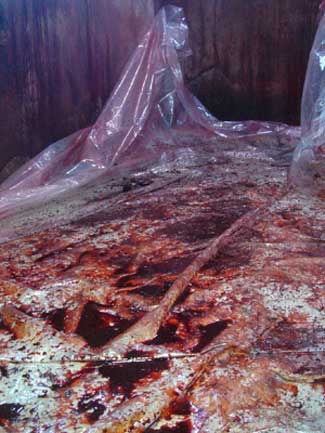 Let’s back up a bit and delve into the plot and approach. The approach is actually filmed cleverly by presenting a cinema verite style that is actually shot from the victims heads (per a mounted helmet which contains a strapped on video camera). Other shots come from the handheld cameras that the snuff film producers hold to get the reverse shots of affliction. Snuff film producers? Yes a group of 3 hardcore violence freaks kidnap unlucky victims to be shot on tape. The idea is they torture the captured on film and sell the footage as real live snuff tapes. 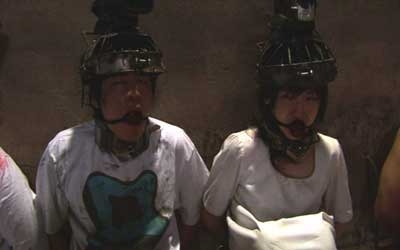 The 3 men consist of Mr. Kim (the leader), bong-sik (his assistant) and a 3rd psycho who wears a pig mask through the whole film. Pighead (so I’ve named) who is obviously not all there is the main inflictor of torture and chainsaw attacks. In many respects he comes across as an Asian Leatherface.

Now our story begins with the victims already in place and awaiting further intentions. Dazed and confused, they all seem to have been knocked out, and brought there in which they now sit bound and gagged. The victims were chosen based on orders from the filmmakers who wanted certain profiles for camera, nothing more. 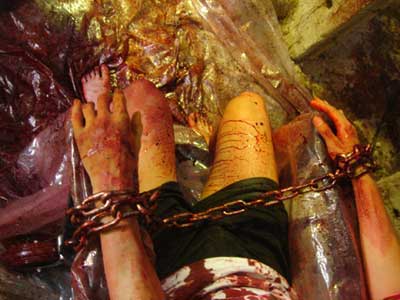 As Mr. Kim toys with them a bit, it is not too long before they get into the main course of this evening. Victims are brought to a blood soaked abattoir in which they are chained to a chair and tortured on camera. Now if we stop right there, it might seem like something derivative from something you’ve seen already. Perhaps but with the perspective coming from the victims POV, it replicates the action being done to the viewers (not unlike p*rn directions that are produced today). We pretty much know at this point things aren’t gonna end nicely, it’s just a matter of how far its taken and to what degree. Well beyond the torture the producers ask the victims questions and offer chances to live if they can endure the pain for 10 minutes. The minutes that follow are hard to watch and harder to imagine. Though imagination has alot to do with the horror here. Much of the shots results are not revealed till later, so we only get the victims POV. Pretty clever and pretty brutal all in one. 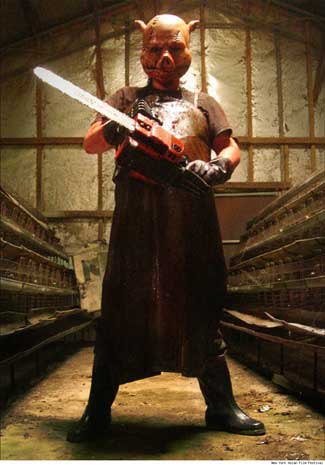 Our 2 key victims are Juny yeon and Jae Hyun. They endure the brunt of the onscreen torture in full detail. Due to the camera mount the shots are reactive and bob around as the victim is being tortured. As an audience we only get to a majority of shots from this setup. While the bobbing and shaking at times might get a bit much to view, it connects us as viewers in a different way to the scenes of the crimes. My guess is that this method will get utilized even more once the world catches wind of it. It might seem sadistic to call this film brilliant, but in retrospect it really is in its own capacity. This capacity is violence, extremes and simulated torture. In that respect I give it 10 stars for it’s accomplishment. Director Kim Jin-Won has crossed the line and delivers on that line with style.

For mass appeal it may only work for 5% of the population due to its extreme visceral nature. I’m gonna call this one damn fantastic and inappropriate for most viewers. 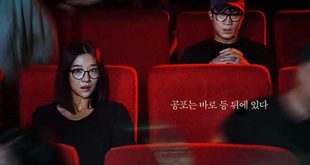