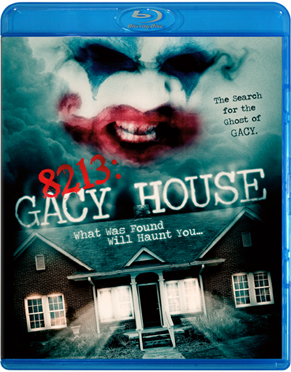 John Wayne Gacy murdered 33 young men and boys between 1972 and 1978 in suburban Chicago. 26 bodies were found in a crawl space beneath his house and 3 others were buried in the backyard. Although the house was completely demolished during the exhumation of the bodies, on May 15, 2004 a group of paranormal investigators wired the home that was built in its place with paranormal detection and surveillance equipment. The outcome of the investigation was grisly, terrifying and disturbing.

The case and details of John Wayne Gacy is well known. A serial killer who murdered 33 young boys in  his house were details that have littered almost every psychopath documentary I’ve seen. Growing up in the area, I also happen to be privy to more of the details from a local point of view. The thing that is interesting with this release titled 8213: Gacy House is that it centers on his old residence of 8213 West Summerdale. The film reports that the old house was torn down with a new residence being rebuilt over it – 3 years later. The house being torn down was correct, but I’m pretty sure the house rebuilding portion wasn’t. Even so without going thru the process of elaborate fact checking, the lot was too small for the house that they represented in the film. 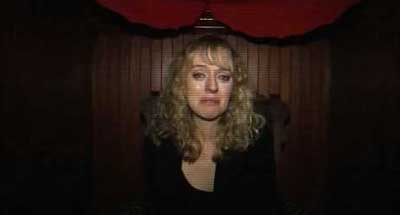 But moving along I tried to keep an open mind to the fact that this was fiction being presented as non fiction. The DVD case says its actual footage, the film says its actual footage and there is no disclaimer at the end of the film. This of course would suggest that what you are seeing is real. It’s not, viewers should make note as we were tricked once with the whole “Fourth Kind” fiasco. Also it should be noted that the house they use appears too old to be a rebuilt structure.

But what we have in summary is a film that showcases the police department footage “reedited” to present an event involving the deaths of a team of ghost hunters who were performing a ghost hunting expedition to wake the spirit of ol Gacy for camera capture. I thought about this a bit, and what I gathered is perhaps the still footage of the fireplace and dwelling shots were the actual real footage with the whole ghost hunting adventure being fake.

As we progress, so does the wave of incidents that are stirred up with in the house. A team of ghost hunters, a psychic, researchers and camera men all set up cameras through out the house to capture events as they occur. At first, its’ really quiet and then the evil begins to stir up to fatal conclusions. I think for presentation purposes, the film was well done as a general ghost adventure fiction piece. We’ve seen this done with “Paranormal Activity” and that seemed to work just fine. When we start mixing too many facts with fiction, smart viewers will start focusing on the facts rather than the presented ride. For kicks they have a couple who has sex on tape during the filming on Gacy’s bed…nice touch if you want to assume a certain humor to the presentation. In another scene we have the lead psychic who gets a scratch on her rather well endowed left breast to the thrill of male viewers. And if that wasn’t enough, the ghost of Gacy sends her back flipping as her bra is ripped off exposing them 2 beauties for a needed encore. The scene was supposed to be scary but ended up making me smile more than anything. 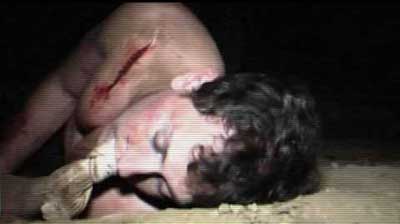 As the team increases their research, the ghost of Gacy becomes more active to the effect of taking out the team one by one on camera with paranormal style scenes. The editing is well done to the effect of how these kind of films should look and in most cases might even be a highlighted film adventure. I’m really at arms about how I feel about the whole thing for alot of the reasons mentioned. 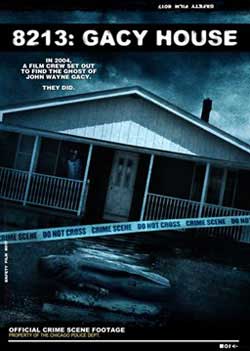 I’m partial to comedic scares that weren’t supposed to be comedic, I’m partial to the fact that the “Paranormal Activity” film inspired too many copy cat productions and I’m partial to film using fact and fiction and not really separating the 2. So as a closer I’m going to have to say 8213: Gacy house is a exciting presentation with thrills and chills that shouldn’t be taken at face value. The production is well done and it’s presented in a believable way that can still inspire legitimate scares.