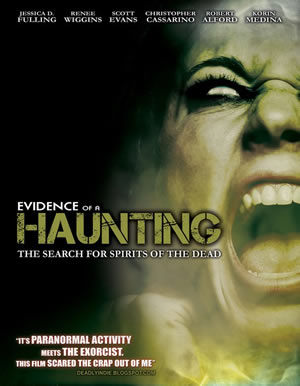 Evidence of a Haunting follows a small group of Texas paranormal investigators – Rayne, Sam, Tor, Father Bowden, Echo and Shelly – filming three adventures for their reality TV show where they encounter a variety of entities, spirits and ghosts. During the final chapter, their investigation run head on into a demon that dwells in the underground tunnels beneath a nearby community college. What they discover will test the beliefs, their fears and their will to survive. With only the ghost of a young boy lost in the tunnels for ages to guide them, the group must solve the mysteries before daybreak or perish along with the secrets hidden in the dark, haunted passageways.

Evidence of a Haunting is another in a series of cinema verite/found footage style independent horror films. The film makers, here, do not fully embrace the technique for the entirety of the film; but, instead, intermix the first person footage with more traditional style approach. The result is more reminiscent of Ghost Hunters than Paranormal Activity, which is both what they appear to be after and what better suits the film. The familiarity with the popular TV show and the many shows that copy it on American cable television allow the mix of styles to draw the audience in as if they were participants and still allow its narrative to progress like a film. Broken into three semi-related segments, the first two serve to both set up the final story and to develop the characters for the third story which takes up a majority of the running time and is the meat of the plot. With a cast of likable, appealing characters, a location that is claustrophobic and creepy, and a story that is full of scary nuggets, ghosts and bumps in the night, Evidence of a Haunting delivers chills and thrills perfect for small screen viewing. 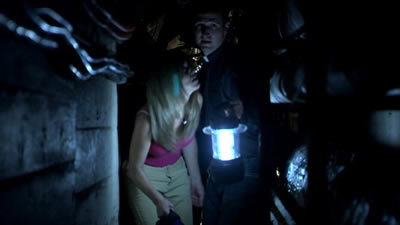 Much of the film’s success is due to the cast. While they all come across as amateurish to varying degrees, they are more than able to carry the film together. In fact, their acting enhances the reality television feel. Even if they have awkward, sometimes unnatural, delivery of their lines from time to time, they are never wooden or painful to endure. They also work tremendously well together as an ensemble. Their relationships and camaraderie feels authentic which reinforces the approach the director has taken for the movie. It is not difficult to believe this group of actors would be a group of paranormal investigators filming their exploits for a television program. Only when they have to step outside the story to deliver exposition about their background or important story elements do they lose that reality-style quality that makes the rest of the film work. One scene between the second and third chapters where the group takes a break in a local pub  works tremendously well and provides the final chapter with a much needed investment in the characters, their emotions, their motivations and their plight. It’s a welcomed break in the story and it’s amusing to listen to them and watch them interact, building on their characters and establishing a few important traits and background information along the way. It also shifts the dynamics just enough for the final chapter to allow the viewer to understand and emphasize with each character’s encounter in the tunnels. 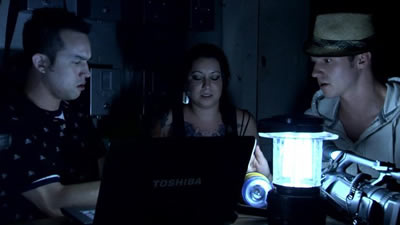 If nothing else, the locations within Evidence of a Haunting feel authentic. The first location seems like a real home that belongs to the family who’s daughter is possessed and the dark corridors beneath the college for the third chapter are convincing in their being desolate and haunted. This goes a long way in keeping the film grounded and from falling into parody territory. Where the beginning story, in the house of a possessed young girl, the rooms feel claustrophobic and constricting, creating interesting lighting and spacial relationships between the characters throughout the house. But it also makes some of the house plants and shoji screens appear out of place and forced. The rooms are a bit smaller than ones seen in similar films like Paranormal Activity which doesn’t allow the camera to pull back quite far enough to benefit the narrative.The first two chapters are a bit too similar in their settings, but they still manage to pull off a similarity to the popular Ghost Hunters television show on SyFy. The change to the underground tunnels for the final chapter is a welcomed change. The first two chapters effectively make the familiar uneasy, so the switch to the unfamiliar allow for the story to become even more frightening than it may have otherwise. Throughout the film, the settings and locations are smart and effective choices allowing the film to generate some chilling scenes. 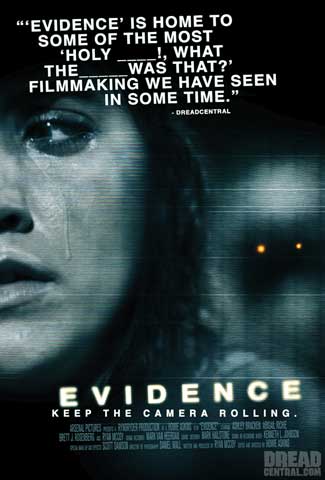 Most of the effects in Evidence of a Haunting are handled through the sound track and simple camera tricks: shaking the camera, loud bangs, slamming doors or bouncing tables. For the most part they work brilliantly – only failing a few awkward moments: the growls of the possessed young girl during the opening chapter comes nowhere near the vocal designs in Exorcist and many similar films. Other sounds work much better, especially the further away from human origin they become. For a majority of the film there are no ghosts to be seen, the entities the investigators encounter are mostly sounds and moving objects. For this film, this is an effective decision regardless of the budgetary constraints. There are very little make up effects and almost a complete lack of gore. The use of the green tinted night vision is used here as well but is thankfully not overdone and keep to a minimum – the film is never forced to rely on this technique. A number of times, a character will get grabbed by an invisible entity and dragged across the floor. While it is becoming a cliched shot in cinema verity haunted films, it is still works and produces goosebumps and raised pulses. 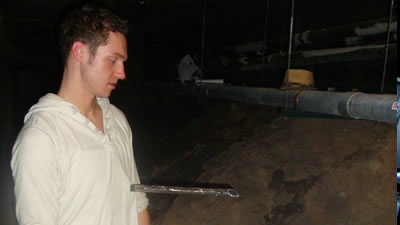 In a film like this, the success of the execution relies on the number of scares or tense moments it is able to produce. Director Joey Evans is able to generate at least one solid jump scare at the best possible moment and he keeps key scenes tense and unnerving. A lot of this is due to the time he takes in getting the viewer invested in the characters. By the time the final scenes have the entities chasing the characters around the underground tunnels, the viewer is concerned for their safety which heightens the fear and fuels the suspense. The sound effects during these scenes are no different or stronger than those used earlier, but they are far more effective at this time due to the attachment to the investigators. Even the internal relationships that feel a tad forced are strong enough to enhance the story during these closing moments.

Evidence of a Haunting is a fun, solid independent paranormal investigator film that works great on the small screen and is well worth a rental. It struggles to achieve greatness or to approach any claim of notoriety, but that doesn’t mean it can’t be effective on its own terms. It works as a companion to an episode of Ghost Hunters where the investigators actually run across and document the paranormal. It lives in that parallel universe where a small group of investigators would be able to accomplish this in three consecutive investigations. Once the film establishes that landscape and the viewer is able to climb on board this small suspension of disbelief, the story generates its share of scares and jumps, but never really becomes terrifying. The actors elevate the film above mediocrity creating an interesting and enjoyable group of investigators. Their relationships and interactions draw the viewer in and keep the events tied to their experiences and the story focused. It’s a solid entry to the growing cinema vertie genre that low budget horror films gravitate towards. It doesn’t redefine the genre, but it does illustrate and take advantage of technique and approach. Evidence of a Haunting is an effective, chilling, well-executed film. 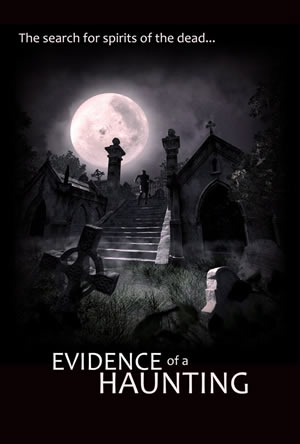