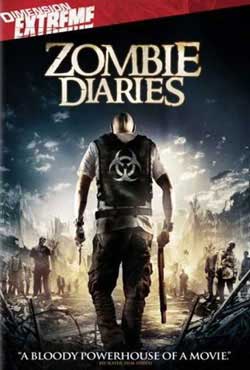 In the not-too-distant future, a mysterious plague has spread to every corner of the planet. Once it kills, the virus reanimates the dead, transforming them into flesh-eating zombies. This film reveals the terror through the eyes of its witnesses. Video cameras from a documentary film crew, a couple fleeing London (ground zero for the virus) and a band of survivors holed up in a barn capture the relentless zombie attack as it happens.

Zombie Diaries is a bit of a case of which came first ….the chicken or the egg? While it does stand on its own as a competent zombie product, it mirrors the features “Dairy of The Dead” and “Rec” whether intentionally or not. If you haven’t guesed already…. yes it’s a another one of those cinema verite style productions dealing with the outbreak of an epidemic and/or zombie-ism.

It’s fair to say, as a viewing audience we keep accepting these films due to the horror factor in us all that likes to be scared by flesh eating creatures who come lurching out of dark places. The diary portion of this film comes in the way of occasional title cards announcing the moment in time the events or acts occur.

I found a mixture of both good and bad elements in this release that I think are just expectations zombie viewers have preference on. The biggest thing that stood out to me was that the zombies were sluggish, slow moving, un-aggressive and pretty stupid at best. I’m sure that statement comes as a surprise, being that ..aren’t zombies supposed to be that way? Well yes and no. Take away “that” aggression and they become easier moving targets with less brutal action giving an avantage to the humans. In a sense, not much action at all…… which makes for bad on screen cinema.

We do get scenes where the zombies grab a meal. But not with purpose and more by the victim being handicapped or surprised due to carelessness. Kind of like a puppy who will eat the meat if it’s there, but wont rip it from your hands unless given. On that level don’t expect alot of crazy zombie attacks. On the other hand because there are alot of night scenes in this movie complete with “night vision” camera tricks, they come out of the dark like ghosts and overwhelm the folks stupid enough to be running around in the dark. So to step back quickly, let’s give a quick overview on Zombie Diaries so you know “what” the story entails.

The moment is the present and a pandemic in Asia has been reported by the news and media. A virus that was reported to originate from Romania is making it’s way across the world. The film intro plays on this factor and the way we sensationalize events in the media. Of course the government proclaims ignorance and denial while the public stays in a state of confusion (sound familiar?). While this is intended to be fiction the reality is very close to home in our present “swine flue” outbreak. The reports are “reported” to be “flue-like” however the feedback that’s televised is very much played up with sensationalistic overtones. What transpires spreads quickly and with dire consequences. Towns becomes ghost towns, quarantines go into effect and communication begins to cease with a lack of opernators not manning the technology.

Our story follows a few isolated cases of groups of people making their way though the madness. For the benefit of the film each of these groups come with a body who documents the daily events in hopes of capturing the events on film. If you’ve seen the movie “Vampire Diary”, then its very similar. Our groups are as follows: Group one consists of Vanessa, Leann, Matt and Andy. Group 2 consists of Elizabeth, John, and Greg. Group 3 consists of Goke, Amine, Mckenzie, James, and Geoff. Each of them are in various parts of the England countryside making there way from town to town. The movie cuts back and forth from each of their perspectives and camera footage. While the paths they take are less important, the idea is that they are each documenting there events as they see them. Most of the film involves the firing of guns at moving bodies like target practive more than as defense.

The film had it’s moments that were creepy, with action that increased at times in the viewing…however as some of the reviews reported this to be one of the best zombie films ever! It simply wasn’t. In fact it drags at times with its non aggressive zombie creatures so I’m not sure what film they were watching????.

The film rounds out with a message that suggests that man is still our greatest threat. The suggested message seems be tacked on as a plot point rather than an intended portion of the story. I give this one a …..”its ok for a zombie film” closing and leave it at that.