While trolling London’s Goth clubs to chronicle a subculture of wannabe vampires, nascent filmmaker Holly (Morven Macbeth) meets and falls for smoldering lesbian Vicki (Anna Walton) — who turns out to be a bona-fide bloodsucker. Though several vampire-style killings arouse Holly’s suspicions about her new love, she soon finds herself drawn into Vicki’s seductive netherworld in this atmospheric tale of horror also starring Kate Sissons.

Gothic folks everywhere will dig this one!

Filmed in verite style similar to Cloverfield , [REC], and Diary of the Dead, we follow the documentarian Holly who sets out to cover the underground trend known as vamping. Explained, This is subculture trend for goths to gather in a ritual of drinking blood they call “exchanging”. Their evenings seem to be be filled with hanging out and attending local nightclubs with others of their kind. The vampire ritual being merely a part of there need to feel like real vampires, though they are just simply humans in gothic attire. That reality may be closer than they bargained for. 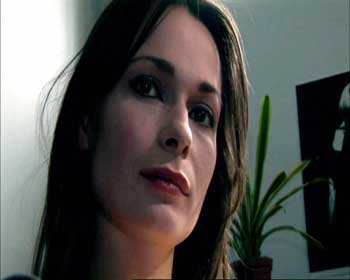 Upon taking in a an attractive stray named Vicki, Holly our documenter discovers over time that Vicki’s in fact a real living vampire, who has also been responsible for the reported brutal vampire style killings around Hollywood. Her documentary quickly changes focus from fad to reality. We catch all the details as there seems to be no shortage of video camera recording every action.

This of course transpires after a love interest begins and a seemingly straight woman takes into a lesbian love affair with this enigmatic new house mate. A romance follows as the 2 grow closer and deal with the real issue of a relationship with a vampire with a few surprises in store as well.

Vampire Diary was directed by the team of Mark James & Phil O’Shea. They seemed to make a good idea work with the right choice of talent on screen.

This film has a certain appeal to it, much like films of this nature. We are engulfed from the camera view and in the process a story unfolds. One that easily makes you asks yourself what if? Now by this time we’ve all had our share of these style of films to the point of overkill, though it does have a certain charm to it and the actress Anna Walton is mesmerizing enough to draw in any gothfanboy (You might recognize her as Princess Nuala from Hellboy 2). I think its her stillness and gaze that works that special magic she brings tp screen. She may be a newcomer, but I’m sure we’ll see more of this actress in future projects. 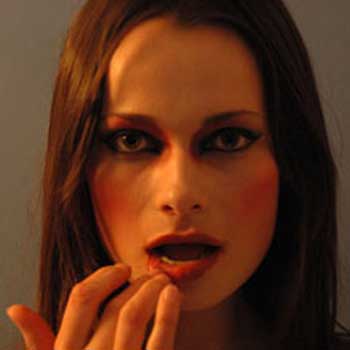 Of course as expected, VD increases in bloodletting as the vampire Vicki also deals with a hunger that wont stop and a need to have fresh warm blood. In a couple of scenes we are even given the benefit of the doubt by having Vicki resort into trying red meat and robbing blood banks to satisify the cravings. One idea that I could easily see a viewer asking themselves. Why doesnt she try this? She does and at the same time answers the question.

VD is a fun punk filled goth trip that I think many will enjoy. It’s no cinematic masterpiece, but it presents an interesting story and one that I feel the gothic culture will really dig as well. In this day of 1 too many vampire films, VD is a welcome piece of cinema that will join the collection nicely. Give it a whirl, I say.