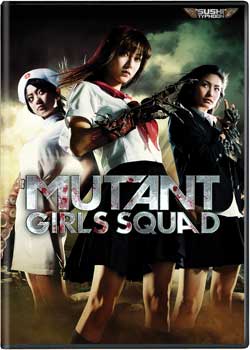 Mutant Girls Squad (???? ???????, Sento Shojo: Chi no Tekkamen Densetsu?, literally translated as “Fighting Girls: Legend of the Blood of the Iron Mask”) is a Japanese film by Noboru Iguchi, Yoshihiro Nishimura and Tak Sakaguchi. The film is about Rin, a sixteen-year-old mutant girl who meets a gang of rebel mutants who aim to take revenge on humans for persecuting their race. The film had its international premiere at the New York Asian Film Festival in 2010.

Straight from the mold of similar Tokyo Gore films and extreme excess, this Asian fantastical horror romp is no exception. I’ve been following these style of films pretty much since their inception and I have to say when they are done right they are an eye candy celebration of inventive organic techno ludicracy. “Mutant Girls Squad” roots itself around the idea that a former race inherited the earth long ago. This race known as the Hilko clan is a modified hybrid of human and mutant parts. The mutant sides come out in battle and rage. The human side is what they hide their true forms under. This borrowed from the earlier days of hero and super villain movies that we may have seen in child hood less-extreme creations is a tribute to the days when suit wearing creatures were the only option. Though with the level of cgi and technology that we have, the idea has been elevated to a more integrated level of transformation. Make no mistake there is blood and gore around every corner, so much that it makes for the experience of a comedic over the top presentation more than a cold straight up violent presentation. 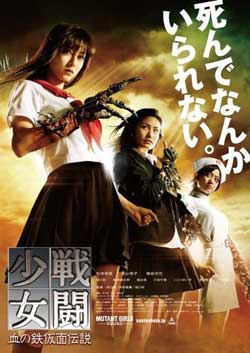 The dialog is cheesy at times, almost reduced to one liners and extremely quick takeouts of those who oppose the enhanced humans, but that is what makes the whole campy affair brilliant to watch. 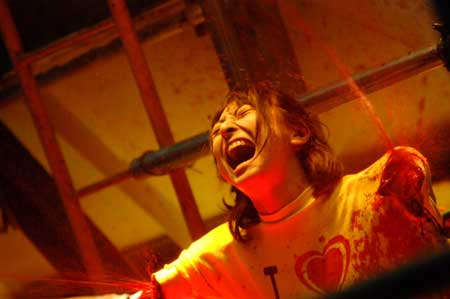 In the spirit of invention, I will say I’ve seen a few new ideas thrown into the mix of familiarity. We have the ever popular head slice kill, though this time they’ve added a new element of a subsection visual. The girls themselves run the gamut of mutations which include a bunch who could easily take on cheesy superhero names. To give you a preview, we have a breast-sword girl, a mutated-stomach girl, a eggplant looking girl (I think???), a girl who has swords for hands, a girl who sprouts octopus arms and a pig face and some other combination of organics I’m not sure I can drum up names for.

Our story begins with Rin, an innocent school girl who is just approaching her 16th birthday. That pain in her hand is no fluke, it’s her Hilco side starting to emerge. Even at the hands of school bullies she remains a good spirited soul. Though when her true nature is revealed, the government wastes no time in taking out her family and trying to kill her off in the process. She transforms which mainly consists of a lethal razor sharp alien hand and a nasty set of martial arts moves. Her discovery acts as a first act to the film which presents her on a rampage thruout her local town taking out attackers left and right. 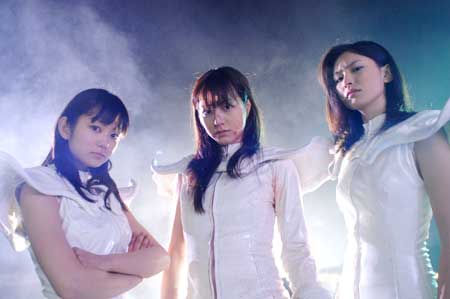 The Hilco clan tracks her down and trains her into the Hilco Squad. A sub team who call themselves the “Mutant Girls Squad” is formed featuring 3 of the best Hilcos with Rin at the forefront. They are sent on missions to exterminate those who have set out to end the Hilco race and see there extinction. The battles are quick. gory and over the top with highly cgi enhanced special fx. What transpires is a moral battle and a chance to fight back against those who have tried to suppress them in the past. You can expect surprises along the way as new embellishments of organic mutant fighting parts begin to appear in what will surely spiral forward into a hardcore stand-off. 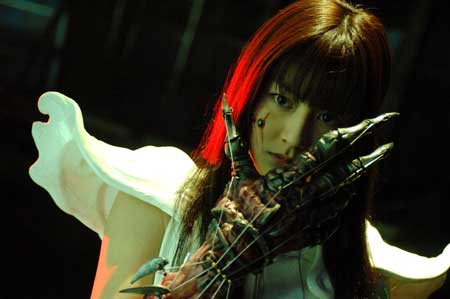 The main behind the scenes star is the brilliance of Yoshihiro Nishimura who mastered the fx behind “Machine Girl“, “Hell Driver“ and the pinnacle “Tokyo Gore Police“. Though don’t stop there if you dig this style….check out 2009 “Vampire Girl vs. Frankenstein Girl“, “Samurai Princess” and “Hard Revenge Milly” as well. In any case Nishimura is co-directing this film with Noboru Iguchi and Tak Sakaguchi. Your best to run an IMDB search on all 3 as they has all contributed similar work if not together. 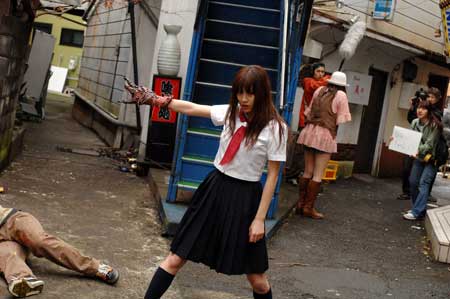 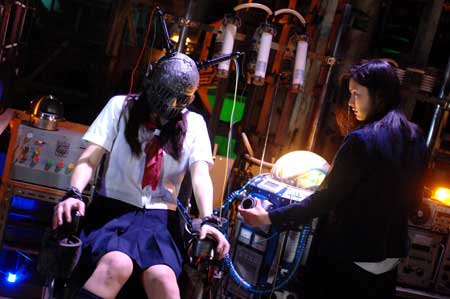 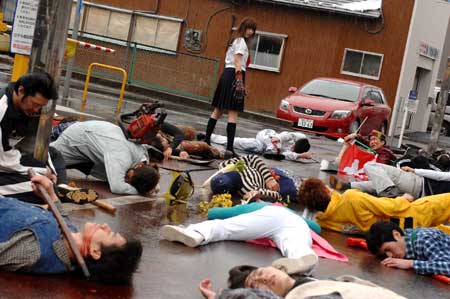 “Mutant Girls Squad” is meant to be experienced as in any Tokyo Gore style film. If gore makes you queasy then you may have to take a rain check but it comes across still in a inventive campy way. I enjoyed the hell out of it and find these films to be refreshing in their means to leave no options left unturned. We can expect more to come….alot more. It horror fun doen inthe way it should be….crazy, extreme and high energy all the way.