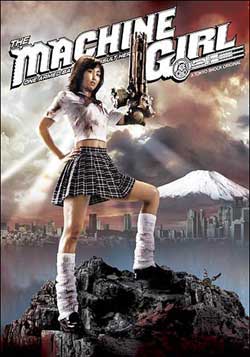 Ami is a typical college girl. She’s bright, friendly, popular and athletic, with nothing to set her apart from other girls her age other than the fact that she is an orphan, left to care for her younger brother after her father committed suicide after being falsely accused of murder. But while there is tragedy in their past, the siblings’ future looks good, except for one thing. Ami’s brother has racked up a considerable debt to another boy at school, and that boy just happens to be the heir to a clan of vicious ninja-yakuza. Ami’s brother can’t pay, violence breaks out and in the course of trying to avenge her brother, Ami is captured by the clan. They torture her and hack her arm right off. Ami escapes, barely alive, and is taken in by the owners of a machine shop who build her a customized, bullet-spewing arm. From that point, the quest for revenge is on in earnest

Its’ a classic story of good vs. evil, a coming of age film and a victim turned aggressor. While many Asian horror films are geared towards this plotline, it still doesn’t mean it isn’t fun to watch.

Ami Hyuga our aka machine girl, shows up in the first five minutes and lays to waste a local gang. With slick moves, one arm and machine gun attachment, it doesn’t take much for her to slaughter the bunch with extreme prejudice. This is the glory of this these style films. You see alot of bodies being sliced, chopped, kicked, drilled, and anything else you can think of. What separates it from “just” gore to a fun action hero extreme status is the way the kills and moves are executed. Ninja style, karate kicks combined with explosive death blows.

Yes it has it all. Plenty of shot gun shells putting holes in stomachs, through heads and even slowing ripping an unlucky victim into pieces skin by skin. All the blood shots spray out like fountains and cover everything in site in campy splendor.

Add to that plenty of cool weapons along the way. The machine gun is one, but there’s a chainsaw hand, a drill bra, a Chinese throwing torture device and plenty of throwing stars that fly though the air with 3D grace which occasionally hit there mark. One of the reoccurring gags is the slicing of bodies and faces that either explode or fall off into several pieces. The props are easily recognized as fake bodies with rubber heads but this is the charm of these films that works in conjunction to the FX.

Director Noboru Iguchi has his own style indeed! In fact I’ve become an instant fan of these off the wall adventures in violence. One of his makeup artist’s Yoshihiro Nishimura went on to create and direct Tokyo Gore Police, so if you haven’t seen that one you need to pronto! They are of course gory and sickening at times, though really alot of that makes you laugh more than turn your head as the presentation is very comic book driven.

This story has all the makings of a good vs evil drama. Our protagonist Ami Hyuga (Minase Yashiro) comes to the aid of her brother Yu Hyuga who is bullied, beaten and then killed by a gang of Yakuza members. There leader Sho Kimura instigates much of this even though he is a coward himself. Constantly surrounded by bodyguards, thugs and an high profile family, Sho pretty much gets his way and stomps on anyone in his path. As we dig deeper we find his family is actually quite insane with a overprotective Yakuza father and a mother who is twice as evil as the rest.

Plenty of needless torture is inflicted on those who screw up including a chef who is made to cut off his fingers and eat them as sushi after bumping into the leg of there son. That level of absurdity is pretty normal in this film so hold on to your seat. Ami who attempts to infiltrate the Kimura gang holds her own long enough to be captured and tortured. This includes the slicing off of her fingers and left arm.

While she does escape she is forced to befriend Miki and her husband in her dying state who help her build back up to recovery. In the process, the husband creates a machine gun toting attachment to accompany her missing arm in battle. We go through a “Rocky” training moment and then it’s off to “all hell breaking loose”.

This is where the fun begins as several subsets of gangs come forth to do battle. The final confrontation is of course the Kimura family themselves. Much about this film is about suspending disbelief as more blood is loss along the way than anyone could endure. It seems that vengeance though is mightier and only keeps the victimized strong to go the extra mile.

I enjoyed this so much that I’m hoping it spawns a series of Machine Girl follow ups While there are many hardcore Asian horror films these kind fall more into the campy, extremes that take the ride all the way into absurdity. Grab a copy and spend a night with this one!