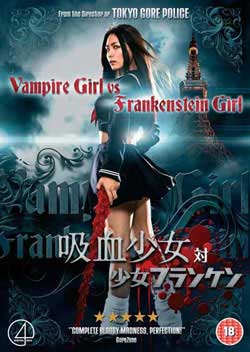 “[Vampire Girl vs. Frankenstein Girl] is set in a high school located at the base of Tokyo Tower. But this is not your typical straitlaced Japanese institute of learning: It’s a special school set aside for the underbelly of Japan’s teens, social misfits and all-around freaks. So why is the too-cute-for-words Monami in their ranks? Because she’s a bloodsucker – but even vampires have feelings, and come Valentine’s Day, Monami gives chocolates to handsome classmate Jugon.

Unfortunately, Jugon finds himself with a case of the cramps after ingesting them. You see, Monami has laced the treats with her blood in order to transform him into one of her kind, so that the two may live happily ever after in undeaded bliss! ¶ Understandably, this doesn’t sit well with Jugon’s current steady, Keiko. Taking on Monami, Keiko stands little chance against her classmate’s supernatural powers, and the jealous girl is killed. However, Keiko’s sadistic scientist father patches her back together using parts gathered from various freak students, giving Keiko enough power to equal or perhaps even best Monami. It is at this point that the true battle between Vampire Girl and Frankenstein Girl begins!”

Well…it was only in due time that the crazy Asian filmmakers who brought you those all powerful dandies such as Samurai Princess, Stop the Bitch Campaign, Zombie Self-Defense Force, The Machine Girl, RoboGeisha and well ……simply there too many to list …….would churn out another crazy ass product. Yes, I’m talking about the spare no prisoners and no amount of gore “Vampire Girl VS Frankenstein Girl”. Now hopefully you’ve had the pleasure of checking out the other films but if not, you in for a treat. In the style of manga cartoons this one has a gaggle of match offs and battles featuring all kinds of crazy devices and hopped up appendages.

Try on some saw blade feet, sword hands, breasts that shoot eyeball hands, an igor character that whips around a deadly spine tearing off faces, and off course the main characters vampire girl and frankenstein girl.

Now before the bloodletting, we need to get into the purpose of the story which ends with the usual confrontations of champions. Monami (Yukie Kawamura), a transfer student new to the school falls in love with Mizushima the school hunk. Keiko (Eri Otoguro), a bratty well-to-do who’s father happens to be the vice principal claims that she has already put tabs on Mizushima even though he doesn’t seem to have any say in the matter.

Her and her posse of equally bratty friends are the equivalent of the female school bullies who get what they want. The trouble is…. Monami is a vampire…and more specifically “vampire girl” in the movie who doesn’t take getting bullied too kindly. While her and Mizushima seem to hit it off, she manages to infect him with a drop of her blood which makes him a half vampire. Of course she wants to close the deal so they can live together in love. Sweet eh?

All that is find and dandy, but its real purpose is to set the backdrop for a confrontation between the 2 females. Now Keiko…in an act of rage manages to accidentally throw herself over the balcony and kill herself. The comedic aspects start with her father who also lives a dual life as a mad scientist within the school basement. His alter ego..so to speak adorns a weird looking kabuki outfit in which he works hand in hand with his assistant the oversexed school nurse to discover the secret to re-animating life. Once he makes the discovery, his first order of business is of course modifying his daughter with the best parts of various school members. Thus Frankenstein girl is born! Though not without enhancements.

These 2 girl-gone-superhero versions of themselves go at it with so much blood that half the time the directors don’t bother to even wipe the camera lenses. All the stops of fast camera work, super cuts, high speed editing, and POV perspectives are combined in really the style that this team has perfected in my opinion. The film is directed by Yoshihiro Nishimura and Naoyuki Tomomatsu who I really suggest you pay them a visit on IMDB to look up their other films.

They all are more or less in the hyper kinetic horror gore comedy style that is so prevalent to this style of Asian horror that it defies the imagination level that most of us could conceive. The FX is amazing as always and at times reminds you of a surreal GWAR video that has been taken to another level. In short its alot of fun and the battles they do back and forth is hilariously gruesome to the highest level. Yukie Kawamura is one beautiful actress who also starred in the “slit-mouthed Woman 2″.

What makes these so fun is that everything that comes at you is combined with school girl innocence making the extreme that much more extreme. Vampire Girl vs. Frankenstein Girl” comes highly recommended as an outrageous good time of a gorefest that can’t be missed!