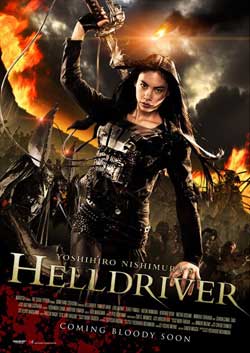 An alien-spawned, mysterious mist blankets the northern half of Japan, transforming those who inhale it into ravenous, flesh-eating zombies hell-bent on devouring the surviving human population. Plunged into chaos, Japan is torn in two—the southern half of the country, where the populace remains untouched by the deadly gas, lives behind a heavily-fortified wall, while the northern half is a lawless, zombie-infected wasteland. Political forces are locked in a stalemate over whether the living dead should remain protected as family members or exterminated like a plague. The economy withers away, and all hope seems lost for the people and the nation of Japan.

Hope arrives in the form of Kika (Yumiko Hara), a beautiful high school girl armed with a chainsaw sword powered by an artificial heart. Recruited by the government, Kika leads a ragtag group of desperados on a secret mission into the zombie-infected wilds to exterminate zombie queen Rikka (Eihi Shiina from AUDITION and TOKYO GORE POLICE) and put an end to the plague of the living dead. But the road is fraught with a thriving zombie culture that, with its own designs on the living half of Japan, refuses to lay down and die.

The showdown for the future of Japan is at hand and no one, living or dead, may survive to see it!

Sushi Typhoon continues in the tradition of exciting over the top Tokyo films with this latest great blood fest titled “HellDriver”. Now those in the know have been hearing about this one under production for quite some time…I’m hear to say it doesn’t disappoint. Under the much heralded command of FX wizard Yoshihiro Nishimura “HellDriver” takes on a future-fiction existence that occurs when a sister and brother murder team is hit directly with an outer space meteor. In the heart of killing off the father of Kika (Yumiko Hara), a young school girl,….the 2 have just finished eating parts of him only to find that an outer space force has plummeted to earth to start a chain reaction of chaos. Rikka (Eihi Shiina) at the core of it. 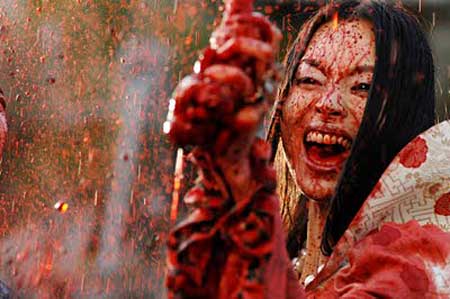 This turns the evil Rikka into a living queen of zombies who is fueled by the extracted heart of her daughter Kika.(I’ll save that scene for you to check out)

If that sounds like alot to swallow, hang on to your hats…this close to 2 hour train ride has more blood, flying body parts and flesh eating craziness than I’ve yet to see. 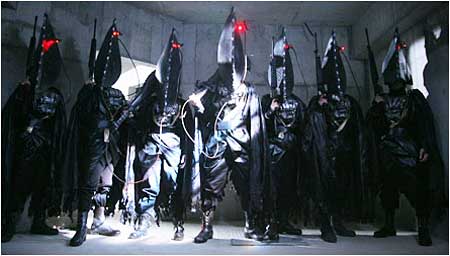 Japan has been divided by an erected wall. The wall separates the still-living from the infected who are more or less hungry flesh eating zombies with an insatiable appetite. Political unrest has the community divided with a concern that the infected “might” still be entitled to rights. We are told that as long as they are moving on 2 feet they are still people.

The zombies, as we are calling them, extrude a weird y-shaped piece from their heads as part of their infection….. which when yanked off is being used by the underground as grounded-up drug hallucinogens. Though the after effect results in one’s head blowing off which doesn’t really make it a popular experience. However the market price on this object is set rather high. They have fun with this idea demonstrating runners who kill off as many as they can to collect on the rewards. 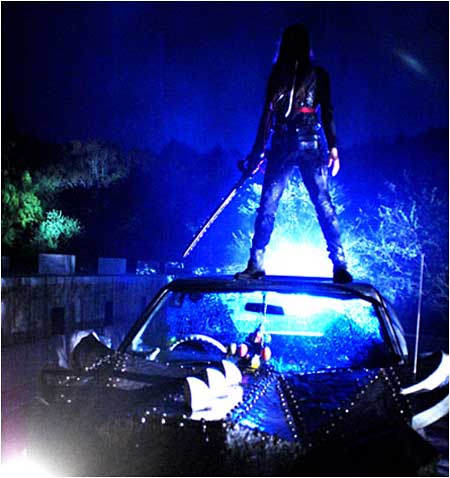 Kika, who is indeed missing her heart now, is resurrected by the government who decide that a super weapon living android will help rid many of the zombie-infected. Kika comes equipped with a fuel-powered saw / sword device that proves to be pretty effective slashing away at the undead. She is later joined by reprieved criminals who have been given a second chance by aiding in her quest.

Though if you know anything from watching these zombie Tokyo gore creations, it’s that the fun never ends with things, creatures and manifestation popping up around every corner. The film showcases a constant battle between the infected and those who have been sent to kill off the Queen thus severing the lifeline from her minions. Even with the constant gore factor here “Hell Driver” manages to invoke lots of dark humor with flying zombie heads that attack what they bite into and a healthy collection of zombie-fused warrior creatures. One creature sports additional arms and legs flying at her victims with sword or machine gun in hand while another seems to be fused together with the discarded weapons of swordplay. Baby zombies, flying umbilical cords, tentacles lashing out, a wall with living zombie arms…..the imaginative collective here never seems to let up making this a must see for the collection of Tokyo gore extreme entrees. 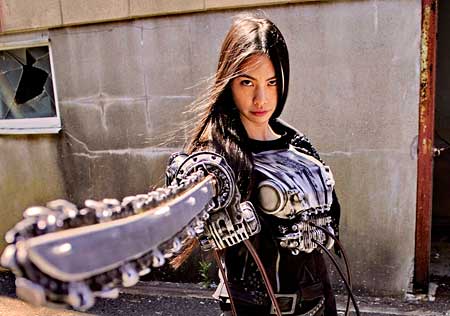 The film is estimated at a $600,000 budget which is pretty much exhausted in practical and cgi effects. Yoshihiro Nishimura is well known for his style which never fails to deliver on driving forward into human chaos. Though for all the bloodletting and limb flying action here you never really feel as disgusted as you should be. I attribute that to a pretty solid in your face attack on senses which never lets up in spraying the cameras or watching heads whip like weapons. There are quite few surprises in this film which I’ll leave with the statement of “zombie rocket space ship”. You’ll have to see this one to believe. Other highlights for me include the zombie car made out of human parts that not only drives rather fast but eats at its target. 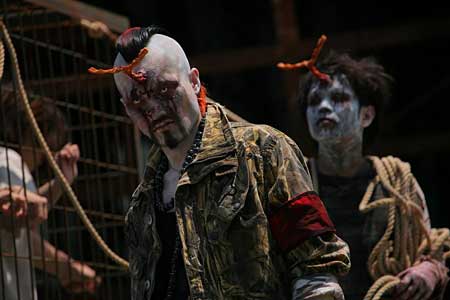 Now looking ahead, it appears that Yoshihiro Nishimura is certainly not hurting for work as 10-12 productions are already underway sporting much of his trademark goofy gore treatments. “HellDriver” excels in its cinematic experience giving the fans “exactly” what they want. You’ll love the dark humor and the creative explosion of ideas that charge at you from each ghastly gory scene. This one has become an instant favorite for me in the realm of Tokyo Gore Extreme achievements. 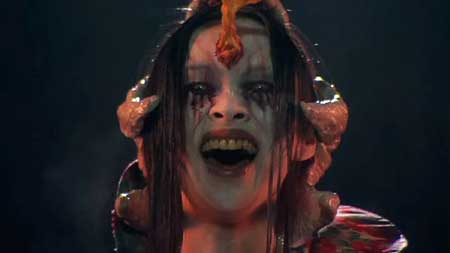