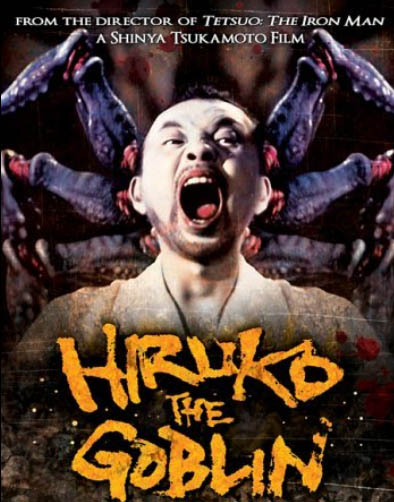 A school was built on one of the Gates of Hell, behind which hordes of demons await the moment they will be free to roam the Earth. Hiruko is a goblin sent to Earth on a reconnaissance mission. He beheads students in order to assemble their heads on the demons’ spider-like bodies. Hieda, an archaeology professor, and Masao, a haunted student, investigate the gory deaths and eventually battle Hiruko.

There is something deeply, wonderfully strange about Japanese horror. The dialogue reads like poetry, the plots flow in equal parts rationale and dream logic, and the monsters spring from the pits of the most feverish nightmares. I love Japanese horror even when it doesn’t make sense, but it’s not for everybody.

You have to know what you’re getting into with this kind of film, if not for things like cultural context, then at least knowing that things are most likely gonna get really weird. Hiruko the Goblin is fairly straightforward as far as supernatural films go, probably because of how much it borrows from iconic American films–references to The Thing, Ghostbusters, Evil Dead, Alien, and others are rampant throughout, and they make little effort to disguise themselves. But despite the obvious nods to familiar movies, this film is an entirely unique experience, and it bears that distinctive Japanese flavor of crazy. 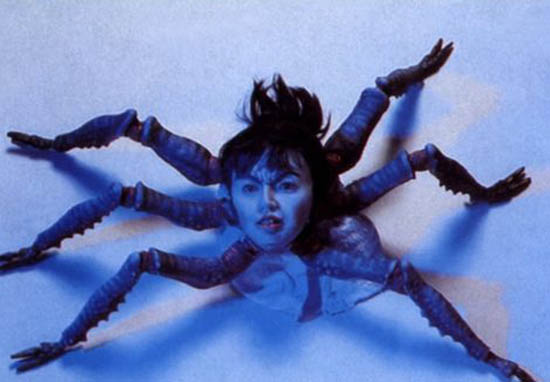 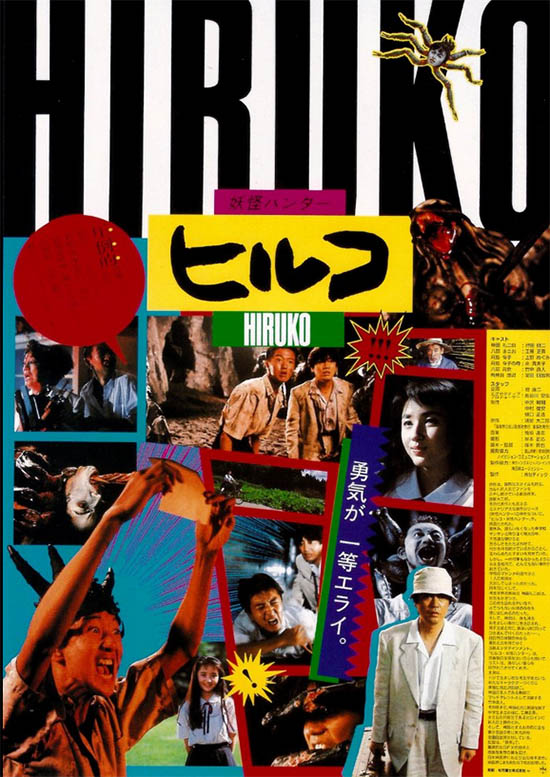 Hieda is an eccentric archaeologist, disgraced among his peers for his theories on the supernatural. He spends his days on dig sites until he receives a letter from his brother-in-law Yabe, telling him of an ancient demon burial mound he has discovered on the grounds of the local high school. While Hieda makes his way to town to investigate, Yabe and admiring student Reiko go investigating the tunnels under the school, only to disappear without a trace. Above ground, summer vacation has left the school abandoned, and Yabe’s son Masao and his friends are hanging around the empty grounds. After being unsuccessfully shooed away by a sketchy janitor, they encounter Reiko sitting in a window, not acting herself. 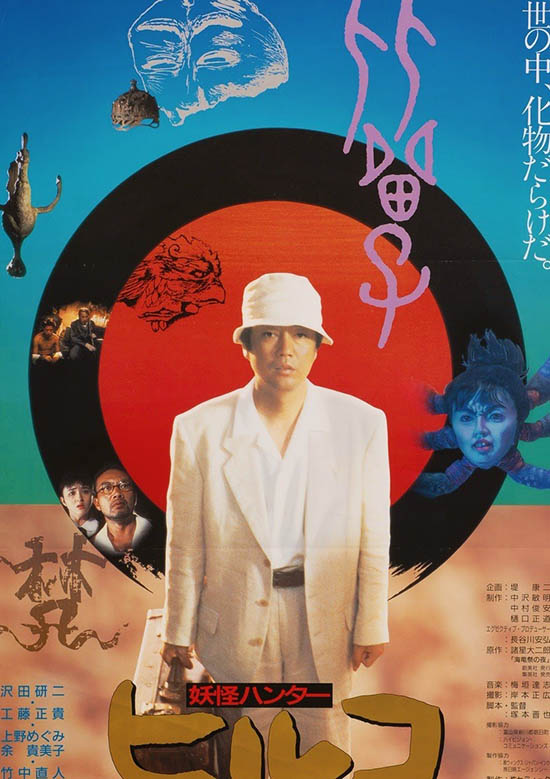 The boys stumble upon a few headless bodies and soon after begin to be picked off by a mysterious force. With each killing, Masao’s body begins to smoke and sizzle, leaving a growing collection of face-shaped blisters on his back. Masao runs into Hieda, who has come to the burial ground equipped with his homemade ghosthunting gear. The guys go after the monster only to again find Reiko–or what’s left of her. The demon has possessed her severed head, scuttling around the halls of the school on crab legs and singing a haunting song that hypnotizes men into cutting off their own heads. It is later revealed that the demon is collecting heads for its brethren in their lair beneath the school, waiting to crawl to the surface. Hieda, studied demonologist that he is, knows that the goblin can only be defeated by sealing it back in its prison beneath the school through a special ritual. Together, with limited tools and strained nerves, the guys attempt to face the demon and trap it back where it came from before it can release the others. 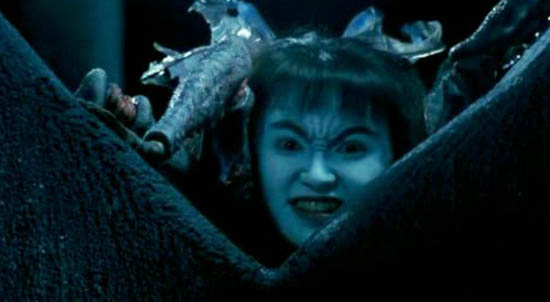 The special effects in this film are incredible, and the best part about it is it never feels like they are showing off. Very little is shown for nearly the first half, any horror being communicated through creative use of camera movement and characters’ reactions. There is real care towards building suspense, saving the payoff until the best possible moment. One perfect “less is more” scene has the yet-unseen demon loose in the school kitchen. All we see are shelves falling down, pots and pans rattling wildly—all the evidence of something awful scurrying around in the dark, while the poor guy trapped in there with it swings a knife around uselessly, terrified of what he can’t see. We’re expecting that at any moment, something hideous will leap out of the dark. Instead, we get a quieter, more effective payoff: Reiko’s lifeless head in a pot.

All respect to subtlety and the art of the slow burn, once the madness begins, it does not stop, only escalates, and it is wonderful. More gore, more guts, more ludicrous body horror than the mind can conceive, each scene seemingly trying to top itself in weirdness. Before this movie, I thought the severed head bit was a little old hat, and Hiruko takes a stale gag and breathes vicious new life into it. Obvious allusions to The Thing can be drawn from the simple image of a head on legs, but Hiruko takes more cues from Carpenter’s directing style, letting the horror build and build, until the final showdown explodes into utter insanity.  Everything from puppets to Claymation to CGI is employed to make the monsters feel real and the gore look juicy, and it is a joy to watch. Quite honestly, the Reiko-head crab monster is such a beautiful puppet, I would be proud to hang it on my living room wall. 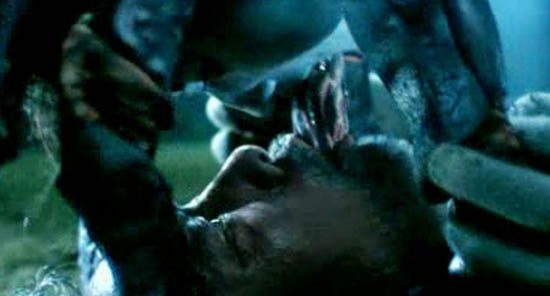 Of course, we ultimately spend more time with the characters than we do the monsters, and thankfully Hiruko gives us people to care about before shit hits the fan. Hieda and Masao are both likeable and they have charming chemistry together, but the clear hero (and my favorite character) is Hieda. He’s a bumbling goofball throughout the movie, waving around his homemade goblin-trackers and screaming like a little girl when the demon appears. But the words “reluctant” or “cowardly” do not apply to Hieda. This guy jumps headfirst through multiple plate glass windows and squares off with a head-spider armed with nothing but a mop. He may be visibly terrified, but he acts heroically without hesitation. He is the true definition of bravery and I love him.

Fangirl sidetrack: It was about halfway through the film that I realized why the eccentric archaeologist looked so familiar. That, friends, is the lovably expressive face of Kenji Sawada, star of Happiness of the Katakuris, a showcase of fantastic musical numbers and hilarious gore, and perhaps the best work Takashi Miike has ever done. I have a huge crush on Kenji’s silly face and I don’t care who knows it. He’s my Japanese Matthew Lillard.

Masao is a sweet yet troubled kid who is the terrified Robin to Hieda’s shrieking Batman. He is initially resentful and skeptical towards his estranged Uncle Hieda, who the family blames for the death of his wife years earlier. But after seeing his friends slaughtered and his crush’s disembodied head climbing the walls, he finally comes to around to Hieda’s more outlandish beliefs. Masao does fall victim to what I like to call “silly meat boy syndrome,” in which the lovestruck male cannot get it through his dumb head that his dreamgirl has turned to the dark side. Suffice it to say, by the end of this night, Masao may never want to kiss a girl ever again. 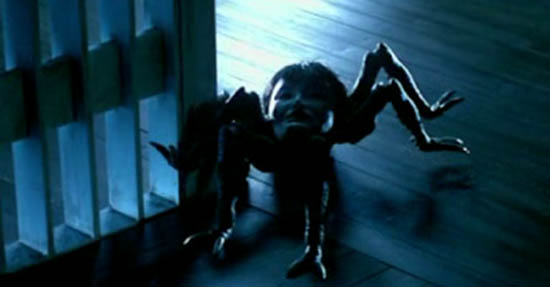 Reiko is fascinating despite the fact we barely get to know her before she becomes a singing spider head. We meet her giggling and riding her bike through a gorgeous field, happy to be alive and looking just so precious in her school uniform. She follows her professor into a disgusting tunnel out of pure devotion, even shouting “Sensei!” with the passion of a dewy-eyed anime girl. This version of Reiko is not long for this world. Once she is possessed, she is singing her lullaby, smiling vacantly, beckoning some unwitting boy to come closer for a kiss–before a monstrous demon tongue comes flying out of her mouth and her crab legs pop out to latch onto the poor fool’s face. Despite being a head for most of the movie, Megumi Ueno pulls off a fantastic performance, a sweet schoolgirl one moment, a screeching monster the next.

A word of caution to the adventurous viewer who seeks out this gem: this movie is amazing, an absolute treat. This recommendation comes from the bottom of my heart. BUT. At the end–and I’m talking after the big battle, when the dust has settled and the survivors are heading home–five minutes before the credits roll, there is a scene. I would describe it to you, but the words fail me. The best I can do is tell you everything that rushed into my brain as it tried to make sense of what I was seeing: Donnie Darko time tube. Bizarro music video. Public access television. Teletubbies. Semen. I wish I could tell you more, but you’ll just have to see it for yourself. I can’t say it ruined the film, but it will haunt me forever. I just had to tell you. I had to tell someone. It may have destroyed me if I hadn’t.

This movie is a blast from start to finish. It is a totally worthwhile watch for anyone who loves practical effects, weird body horror, and a little goofiness mixed with the gore. The references to other movies are a sweet treat for the horror nerd, the characters are lovable, and the effects are a feast for the eyes. I want to hunt down the Blu Ray for this film and tell everyone I know about it, because I believe even the most cynical viewer will find something to love about Hiruko the Goblin….even that weird-ass ending.