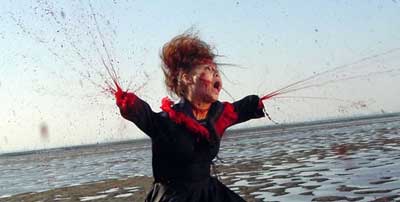 I am a total luncidal blood slurping cinema gorehound on a neverending search/hunt for my next gore fix!! And if you are too then you need to keep reading because if you are just finding out about these movies you will be thanking HorrorNews.net for enlightening you about these unbelievably bloodsoaked, gut ripping, head smashing, outrageously over the top gore flicks coming out of Japan! Look, I’ve all ready wrote the word ” gore ” three times before this so if you like gore you will want, no, you will NEED these movies for your grue dripping dvd collection!

Horror News offers many more articles on Asian Horror Films, make sure and check them out!

Sure we all love scary horror movies like ALIEN, THE EXORCIST, HENRY:Portrait Of A Serial Killer, AMITYVILLE 2: The Possession, SEVEN, RINGU, SILENCE OF THE LAMBS and so many more, more serious and dramatic films like these and I have all these movies in my extensive and supremely impressive dvd collection but….dont’ you agree with me that these movies would have been even better if they had more gore scenes in them? Actually some of the movies I listed don’t really have any gore in them at all. 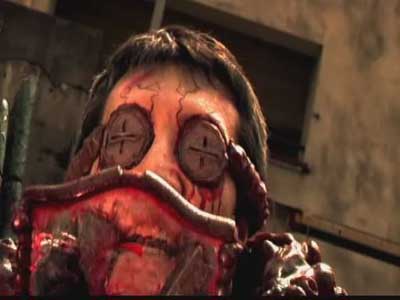 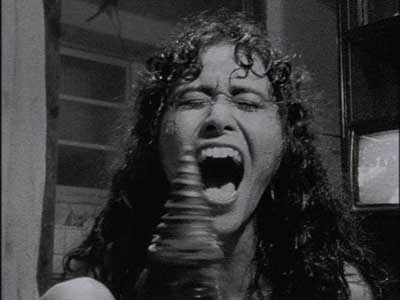 Like I stated I love these movies, I enjoy a well made serious slice of horror cinema but I gotta say that it was EVIL DEAD 2: Dead By Dawn that made me a hardcore horror fanatic! When I saw it for the first time I was blown away by how wild and over the top, bloody, gory, funny, scary it is and how it is truly a roller coaster ride of a low budget genre flick that it made me want to see other movie like it and more horror movies in general. Sure I had seen the films of John Carpenter, Wes Craven, George Romero, David Cronenberg, and the FRIDAY THE 13th films but EVIL DEAD 2: Dead By Dawn was different. It was crazy and fun and captures you from the moment it starts till the very end. And since then I’ve seen hundreds, maybe thousands of horror movies and while I’ve seen some good to great movies very few have matched the intensity, imagination, and haunted house feel that EVILD DEAD 2: Dead By Dawn has! 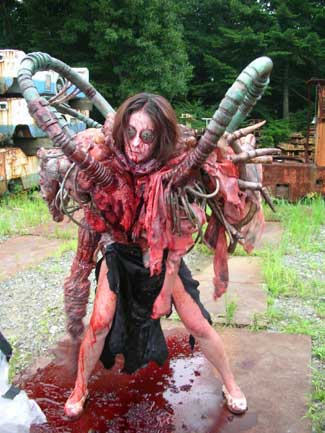 Personally I think BAD TASTE, BRAINDEAD, and STREET TRASH have the power of EVIL DEAD 2 and TEXAS CHAINSAW MASSACRE 1 and 2, RETURN OF THE LIVING DEAD, STORY OF RIKI – OH, LADY TERMINATOR, come close and to a lesser extent some newer films like THE CONVENT, SLASHERS, ACCION MUTANTE, and SARS WARS have that spirit but most of the movies I have seen do not reach the level of EVIL DEAD 2 and I have seen the majority of the Italian horror movies, the giallos, the cannibal movies, which I love, and the films of Fulci and Argento and films from many other countries and tons of low budget American movies but now……BUT NOW these new film makers from Japan are stepping up to the plate and, for me, reinvigorating the genre and breathing new life into the gore film! GORE is GORE and without a good story, good actors, and good film making behind it it doesn’t mean much and you migh as well just watch a lipo suction or facial reconstructivee surgery video. Well screw that statement because I love a mindless gore for gores sake film and the Japanese are giving me what I crave.

And I was there when the long haired pasty face ghost girl movies were creeping out of the woodwork and I like them and have alot of them in my vast vault of horror dvds. And recently I discovered TOKYO GORE POLICE, MEATBALL MACHINE, and MACHINE GIRL and was once again rocketed off my couch by how awesome these movies are! I ate ’em up and was still starving for more and thank Satan that there are more like them and thanks to Mike B the head honcho at HorrorNews I know about them and pass this info on to you so you can also expand your collection of gore movies!

I don’t want to call it the new wave of the Japanese gore film but it certainly seems like it. i don’t know if it’s a backlash to all the ghostly horror that has been coming out from all over Asia or that maybe these film makers love EVIL DEAD 2: Dead By Dawn even more than I do and they are trying to make their own movies styled after it and this is how they are coming out but I know that most of the same film makers are responsible for most of these movies coming out. Film makers like Noboru Igichi, Kengo Kaji, Yudai Yamaguchi and Junichi Yamamoto are creating a new sub genre, but I write this down with trepidation because I do not want to curse it by saying that and the flow of these flicks to stop.

Because I love it all and will not get tired of bloodspraying, limb chopping, intestine extracting, and the crazy storylines and bizarre characters that are in these movies. But it’s not really like super extreme gore movies are new to Japan. There is a direct link to older movies like JUNK, VERSUS, TETSUO: The Iron Man, the GUINEAU PIG series the films of Takashi Miiki and so many others and of course all the anime and manga from Japan. And what are these movies!?!? You are probably asking yourself this question right now. Well here are the ones I know about: VAMPIRE GIRL VERSUS FRANKENSTEIN GIRL, MUTANT GIRL SQUAD, SNAKE GIRL, YAKUZA BUSTING GIRL, GOTHIC AND LOLITA PSYCHO and ROBOGEISHA! I checked out the trailers for these fantastic films online and I need all of them! And if you don’t know about them or TOKYO GORE POLICE, MEATBALL MACHINE, or MACHINE GIRL a somewhat similar comparison would be PLANET TERROR. 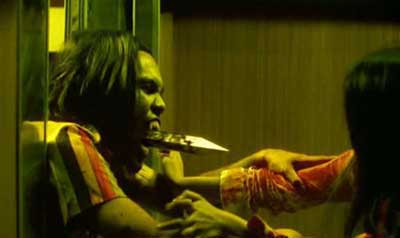 I know you seen it, I liked it and I can only assume you liked it and if you enjoyed it’s over the top effects and throw all logic out the window sensebilities, man, you need these movies! I mean for us it’s a way of life. We buy the magazines, we check out the websites, and buy the t-shirts and toys, put up the posters, and go to the movies and buy the dvds and people on the outside that don’t love this stuff look down and laugh at us for liking all this junk but I take it even more personally when a fellow horror fan movie snob talks down about these gore movies and the the focus of these movies is the gore. So if you are expecting SILENCE OF THE LAMBS, THE DEAD ZONE, FRAILTY, or SAW, THE OTHERS, THE EXORCISM OF EMILY ROSE then you might scoff at these movies but even if you do have a stick up your ass you probably won’t be able to not giggle and laugh and have a good time watching them. 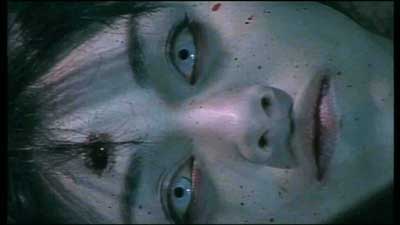 But while I was watching the trailers and looking at other websites for more info about all these masterpieces of madness what I really wanted to know was when were all these badgirls going to hit our oil slicked shores on dvd? The best I could do was to find out that some of them do have a Asian or UK region 2 version and that there is a all region Thailand version of VAMPIRE GIRL Vs. FRANKENSTEIN GIRL and that it is also avalaible on Netfilx as well as ROBOGEISHA! Pretty much all of these movies will be doing the rounds on all the major and probably not so major genre film festivals. 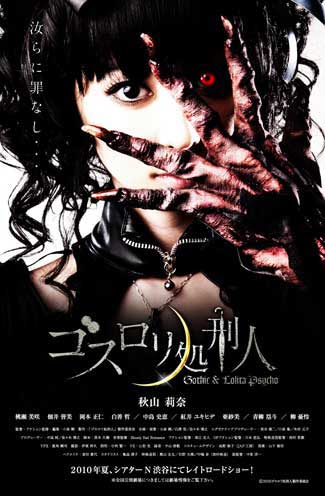 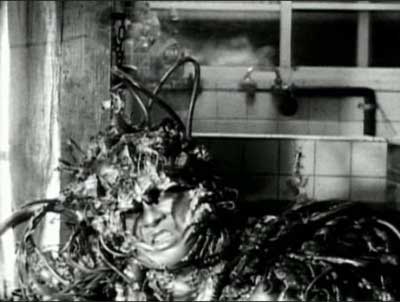 Also The Japanese dvd company Nikkatsu is creating a sub label called Sushi Typhoon that will specialize in these types of films but I am still left wondering if Sushi Typhoon will only be putting them out for the Asian market or will there be U.S. office for Sushi Typhoon putting them out for us ugly American gorehounds. Or will somebody like Media Blasters, Unearthed, Fangorias Gore Zone, or Synapse pick up the ball and give these discs a proper super duper special edition with all the trimmings. Personally I like the way Synapse does a dvd but I don’t think they do much in the way of Asian releases and it was virtually impossible to to find any concrete info on who will put out the U.S. versions but I needed these movies like yesterday! 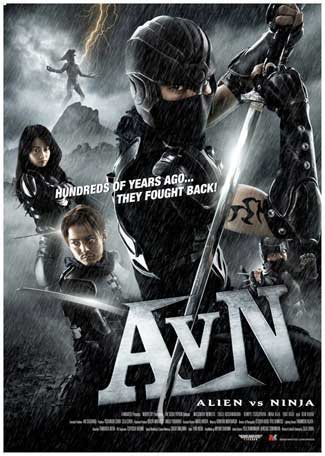 Maybe I need to dig further but all the sites I looked at that dealt or specialized in Asian cinema knew no more than the next about the release of these movies and most of what I read was just speculation. I/we need concrete info on when these movies will be avaliable for mass consumption and if they are coming out soon or should I just sit on my hands and wait. I wish there was someone, a go to person that had all the answers but I’m posative they will come out soon over here because these movies are just too outrageous to be kept under the radar of fans for long. 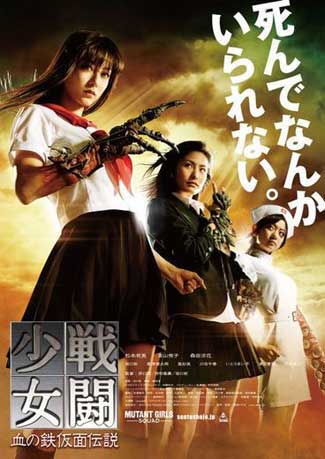 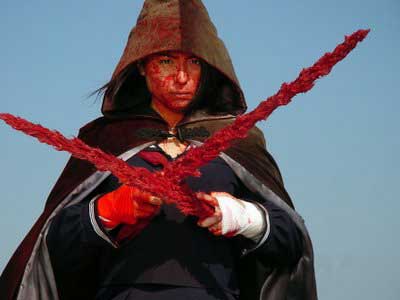 There have not been that many movies of late that I have been really excited about to see. Over the last decade and more I have caught some flicks that has that spirit of EVIL DEAD 2: Dead By Dawn. Some of these movies are DAGON, DAY OF THE BEAST, DUSK TILL DAWN, INCIDENT ON AND OFF A MOUNTAIN ROAD, and then back in the 90’s I was totally into all the Hong Kong action movies and when Hollywood started making good comic book movies I was excited about those but not so much anymore. I loved KICK-ASS but all ready knew what it was about so there was no mystery there and I highly doubt they will make the comics I really love into movies.

But now I have these movies and after Mike B. alerted me to them and checking out the trailers I have something to live for again! And you can read reviews for ROBOGEISHA and VAMPIRE GIRL VERSUS FRANKENSTEIN GIRL here on HorrorNews.net to learn more about them and leave a comment because these reviewers really need validation for what they do and they really appreciate it. Final words: Okay, these movies are not without their flaws and they are not your traditional frightfests going for scares and creepiness but with their enthusiasm, over the topness, gallons of blood, dumpster loads of gore, and outlandish fun they have in them give them a underground rock n roll feel to them with the rockstars being the film makers as well as the actors and characters within them. I am a fan and I love it all and I hope you do to. Here’s to a bright blood red future of many more of these films to come! 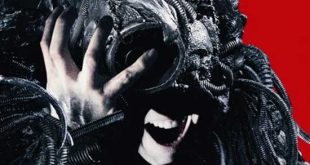