If you are a noob to the horror film world, or even if you are a seasoned veteran, you know that finding a horrible horror film is not that hard. The shelves of horror video sections are riddled with horror films that will make you ever wonder who gave the production team the budget to make that piece of sh*t. But don’t worry; I have spent the last week sifting through my online video account and my local video store to bring you the ten most horrible horror films on the market today. These are the films that tried to be scary but failed miserably. The films with actors that make Keanu Reeves look like Tom Hanks.

WARNING: These movies are so bad, but for some what makes them so bad is the ending, so SPOILER ALERT below.

01-  The Happening (2008)
I had such respect for writer/director M. Night Shyamalan. Even through the rough patch of Lady in the Water I was still a devote fan. But then during one June night in 2008, I suddenly wanted to slit his throat. The Happening not only had horrible acting (I’m looking at you Marky Mark…) but it also has one of the worst horror villains in horror history, NATURE!!! Oh no, the grass is coming to get me!!!!! When I was in the theater and the wind stopped blowing, which signified that nature was no longer pissed, I stood up and said “Fuck that sh*t” and walked out of the theater. This was the only film that I have sworn to never see again, which is why this movie has earned my number 1 spot of worst horror movie in human history. So when you are collecting your M. Night collection, be sure to buy The Happening so that you can light it on fire. 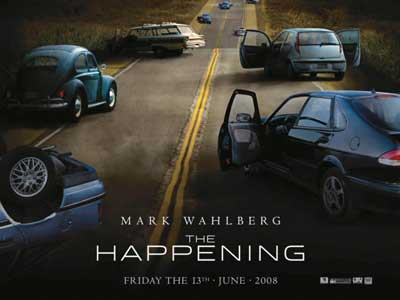 02- Troll 2 (1990)
You would think that a film called Troll 2 would actually have some Trolls in it right? Well not this wonderful sequel. At best these creatures are goblins, since they live in a city called Nilbog (Goblin backwards, creative huh?). The problem I have with horror movies like this is wondering if the director really thought some of this was actually scary. Most of these films are more comedic than scary, especially during my favorite scene when a goblin has sex with a piece of corn, which results in “Evil Popcorn”. Be sure to pick this film up for a good laugh and a good helping of WTF?! 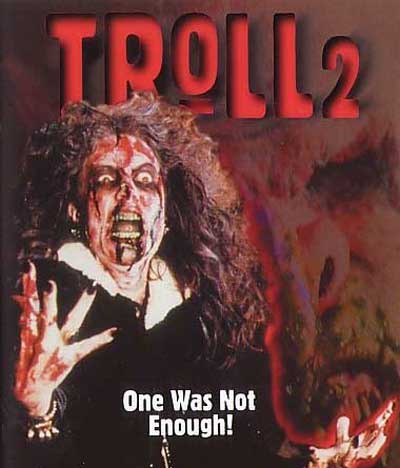 03- Sleepaway camp (1983)
This film was on my previous list of “Best films to watch on Valentines Day”. But Sleepaway Camp is also one of the worst films out there. The characters in this film are all f*cking each other, which make the story line hard to follow, and the acting is beyond horrible, fake screams and all. But what makes this film my number 3 of worst horror films out there is the fact that at the end we see our main character Angela (played by Felissa Rose) with her legs spread and full on penis and testicles laid right out there while Angela makes a lovely hissing noise. If that won’t give you nightmares I don’t know what will. 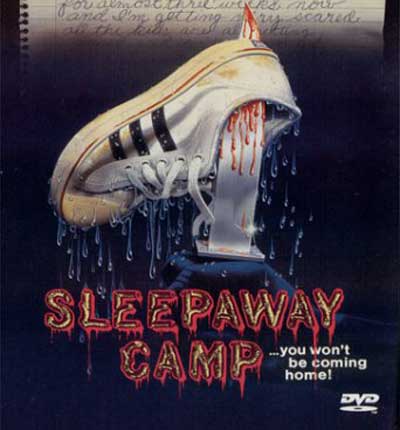 04- Maximum overdrive (1986)
If you are ever bored one day and you look at Stephen King’s IMDB page you will see over 100 credits as a writer, but only one as a director. Why is this? Well if you watch Maximum Overdrive, which was directed by King himself, you will understand. First off, this film is about a Semi-Truck that attacks humans and is fueled with blood. But surprisingly this film was nominated for two awards, Razzie awards that is, “Worst Director” and “Worst Actor” (Emilo Estevez – the lesser of the Sheen brothers). Please, Mr. King, if you’re reading this, never EVER direct a movie again, stick to the writing.

05- Santa’s Slay (2005)
Do you know who Bill Goldberg is? If not Google him, I’ll wait… Good, now you know why this movie is on my list, that’s right, Goldberg is the lead actor. Imagine seeing a 6’4, 300 pound Santa chase down an old man on his slay saying, “Looks like grandpa got run over by a reindeer!” But what I think is the best part of this film is the fact that the reason Santa has to deliver presents is that he lost a curling match to an angel and was sentenced to deliver presents for 1000 years. But in the year 2005 Santa’s sentence was over and he wanted to go on a killing spree, muhahahaha! 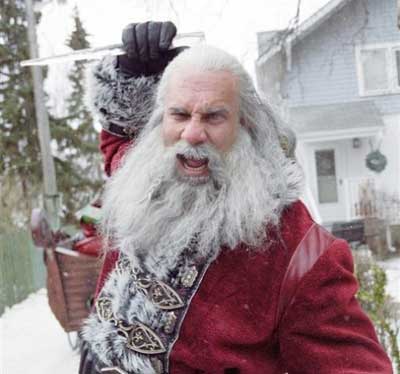 06- The GingerDead Man (2005) / The Gingerdead Man 2: The Passion Of The Crust (2008)
These films are put together on my list because they are both equally bad. Well that’s not entirely true, the first GingerDead Man did have Gary Busey as the voice so that made it entertaining at least to listen to his crazy ass trying to be a gingerbread man made with the ashes of a serial killer. But what makes GingerDead Man 2 so awful and awesome at the same time is the fact that they are making fun of Mel Gibson’s Jesus flick, which is always fun, but it also has the best gingerbread man crucifix scene that I have ever seen. That scene really gave James Caviezel a run for his money. So run, run, run as fast as you can. You can’t catch me, I’m the GingerDead Man! Well GingerDead you were caught and you and both of your horrible horror films made the number 6 spot on my list. 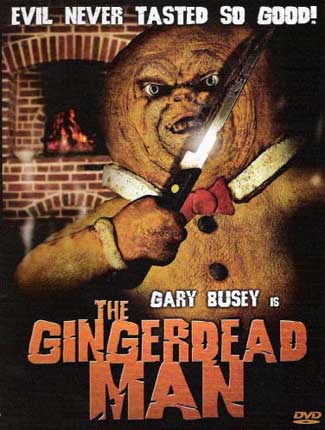 07- Zombie Strippers (2008)
When I first picked up this film I thought it was one of those half movie – half p*rno movies, kinda like Pirates with Jesse Jane. Well I was almost right. This film does have a lot of nudity in it, including a zombie shooting ping-pong balls and pool balls out of her vagina, but that’s about the only good thing about it. Jenna Jameson is the lead in this movie and I have never seen her act before. When I would watch her in p*rno’s I would skip the acting and get straight to the good stuff. But Jameson attempting to act is quite the site to see, so if your looking for a good laugh and some half naked zombies, be sure to pick this film up.

08- Leprechaun: Back 2 tha Hood (2003)
Keeping with the stoner horror movies theme, I bring you the sixth installment in a horror franchise that should have ended at number 2. Leprechaun: Back 2 tha Hood is the sequel to horror gem In tha Hood and has all the same elements except for a surprise ending where someone gets a bong impaled through their chest because they wouldn’t give the Leprechaun back his gold. So really the moral of this film is, don’t steal gold from a high Leprechaun with a sharp bong. 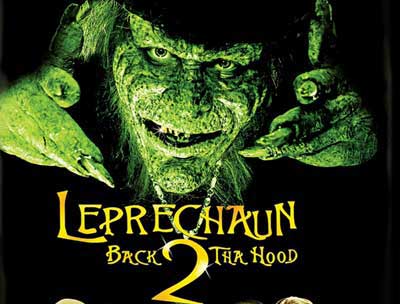 09- Snoop Dogg’s Hood of Horror (2007)
I’m pretty sure I got a contact high just from watching this movie. Snoop was just out of Soul Plane and I guess he didn’t like comedy, so he wanted to try his hand in Horror. Hood of Horror is an excellent film if you have just eaten 10 brownies… and I don’t mean your grandma’s brownies. The horrible acting, which all lines are spoken as a rap song, the even worse story line and just the fact Snoop is in this film give it the number 9 spot on my list. There are really no more words for this film but if you’re a Snoop fan than grab your homies, smoke a few and enjoy. 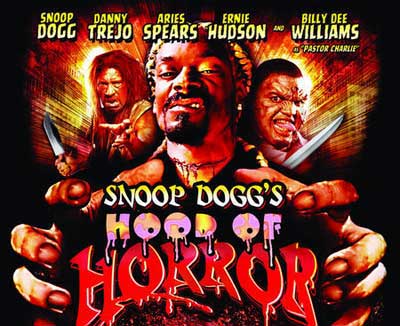 The second reason this film is on the best of the worst list is it doesn’t feel like the traditional Jason Voorhees character. However, this film was intended to be the last films of the franchise, even bringing everything full circle by having the decomposing body of Mrs. Voorhees pull a teenage girl into the water at the very end. This movie is not the worst one I have seen, but because I feel that it doesn’t follow true Friday the 13th style it gets the number 10 spot on my list. 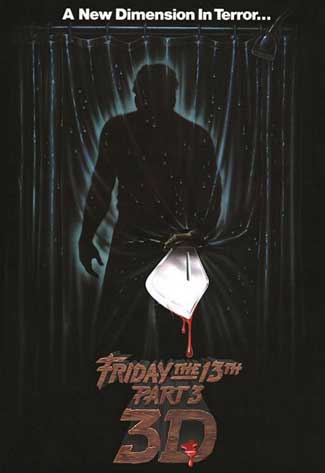