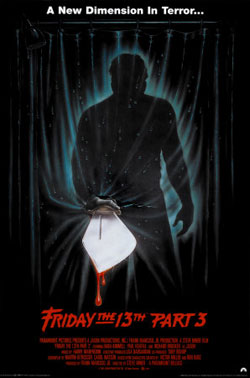 After surviving the events of the second film (a machete through the collarbone) Jason continues his killing spree at Crystal Lake. Becoming seemingly becoming more dangerous with each kill no one is safe from Jason’s never ending wrath.

Note: I will be reviewing the 3-D version of this film as I am one of the wackos that have seen it a few times in the theatre in its original 3-D and I actually spent more money than I should to get this sucker on DVD in 3-D from Japan. While it’s a great film on its own, it’s even better in 3-D

Possibly the single best Friday the 13th there is. It’s really hard to pick the best from part 3, 4 and 7 because really they work well on so many levels but for the sake of the review this may be the best of the best. Director Steve Miner and the films producers completely redeem themselves from the inconsistent part 2 with an insane 3-D follow up. Cashing in on the 3-D craze at the time and being lucky enough to have the franchise’s 3rd installment was a gamble that paid off for the producers of the Friday the 13th franchise. But it’s not just the 3-D that works for this great sequel; the film finally finds a formula that works for the series. Gore, characters you don’t totally hate, shenanigans, and Jason finds himself and his trade mark hockey mask to become one of if not the meanest bastards in slasher history.

The plot of Friday the 13th 3-D is pretty confusing if you look too hard into it. Jason is still alive and doing fine despite his pretty bad machete wound he suffered in the first film. Maybe it was just a flesh wound? Jason pretty much just gets up, dusts himself off and just gets right back to killing everyone in sight. There is some sh*t with the heroin having flashbacks of Jason trying to rape her or something but it’s always lost on me. Long story short is Jason interrupts the weekend getaway of some assholes and only one girl manages to stop him yet again.

I don’t know if it was criticism of the first film or because they were using 3-D and they needed that extra wow factor but this movie ups the blood letting ten fold. Just about everybody gets it in an over the top, violent, and bloody fashion. You get some great kills this time around and not just your typical throat slashing. You get severed limbs, crushed heads, people pitch forked, and one that really has to be seen in 3-D to be appreciated a harpoon through the eye. I would also like to take this moment to point out my favorite kill in the whole series, Andy (Jeff Rogers) gets split in half while walking on his hands via a violent blow to the balls from Jason. Seriously a machete chop to your balls from Jason? Just thinking of it makes the boys retract into my abdomen.

The 3-D work is also above par for the time. You should note that in the early 80’s much like now, 3-D was the great marketing craze but more often than not you got a regular movie that delivered little in the way of 3-D effects. Steve Miner and I’m sure his DP defiantly figured out the key to good 3-D isn’t just sight gags its keeping the foreground full of anything even if its smoke to further enhance the 3-D effect, Friday the 13th doesn’t disappoint on that end

In addition to some great gore FX and awesome 3-D, Jason also gets a makeover in what becomes a tradition in Friday the 13th films. As a standard Jason now looks drastically different in each picture. This time around they go with a hairless Mongoloid look as compared to the mountain man look of the second picture. Instead of wasting the makeup behind a mask all film they do give you a few moments where Jason (Richard Broker) gets to emote through the prosthetics and its plain scary.

I worked at a Chucky Cheese for a few years as a teen and I had a family that had retarded kids they would bring in. The oldest one had to be easily 6 foot 5 despite being maybe 10 years old, I clearly remember the faces he would make when he would piss in the ball pit, they were the exact same faces Richard Broker made as Jason and that always scared the hell out of me. Never let Jason in the ball pit.

Speaking of Jason, he really finds himself in Part 3. Not to give the easy answer but it’s defiantly the mask. Finding an imposing look in a simple hockey goalie mask gives Jason the ability to roam around and become more than just a camera perspective, and taking a page from Halloween there’s something chilling about an emotionless killing machine. And by killing machine I really mean killing machine, this movie in particular gives us the notion that Jason is really good at killing you with anything laying around including his bare hands because apparently he also has super human strength. He’s like the Bob Villa of wholesale murder. Hmm need something to murder you with ah- perfect a harpoon gun, a pitch fork, an axe, hey f*ck it lets use my bare hands.

What good Friday the 13th wouldn’t have a batch of unsuspecting thumb suckers for Jason to cut to pieces. Like most Friday the 13ths the characters are pretty interchangeable but part 3 has a few exceptions. First of all there’s Harold and Edna. Seriously who let these 2 sh*theads run a grocery store? Edna seemingly does nothing but curl her hair and Harold does nothing but put his pet rabbit’s dirty ass on all the produce, or if that’s not vomit educing enough he removes the protective seals from everything so he can taste test it. You can’t wait for them to die but they are fun in their own white trash kind of way. If those two weren’t head scratching enough we also get some scary biker gang, post nuclear, street punk types that could only come from the 80’s. Honestly I’m pushing 30 and I never once remember seeing anyone looking that over the top in the 80’s. I truly believe the nuclear punk character is a creation of Hollywood or maybe Michael Jackson’s beat it video. Toning it down a bit may have been more believable but this is in a universe where you can squeeze a guys head so hard his eyeball pops out.

Lastly how can I write this article without giving some props to Shelly? The Shelly character is the standard to which all prankster/joker characters are set. He goes out of his way at every step to piss off and annoy people- and why does he do it? Because he thinks people will like him more because of it. When Shelly isn’t busy being a pain in the ass he’s awkwardly trying to get laid with disastrous results. I don’t know why but I relate to Shelly, I think lots of us do simply because we are all a pain in the ass and socially awkward at some point. And besides who hasn’t gone out of there way to get scuba gear, a working harpoon gun and a hockey mask to impress a woman? If it wasn’t for the Shelly “scuba snatch attack” technique id still be a virgin.

Friday the 13th part 3-D is (if you factor in the 3-D) the best film in the series. Everything clicks and feels right every step of the way. It’s an over the top gore fest with some great 3-D shots and the origin of the Jason we know and love. This movie is required viewing for any self respecting horror fan. Expect it soon on DVD with a special edition release from Paramount in its original 3-D format!

On the character of Jason:

This is the movie I really began to see Jason as just perpetually pissed off. But why I ask? What happened to Jason that’s so bad? Yeah I get that his beloved Mother was killed, and I get that he looks like sloth from the Goonies but I still don’t buy it. Jason’s mom was a crazy bitch, he’s probably happy she’s not in the picture. And so what if one eye hangs considerably lower than the other, you’re f*cking Jason Voorhees, if you really need to get laid you can always kill any woman of your choosing and f*ck her while she’s still warm (if he doesn’t do that already). No I think Jason has some serious Hemorrhoid problems or something. What else could there be that would make him pissed to the point of non stop murder? I mean even guys like Hitler and Freddy Kruger take breaks, Jason never stops. Do you ever see him sitting down? I rest my case. Jason is pissed we all don’t have the burning and itching sensation he constantly has. I think if he could take one sh*t comfortably lots of people would still be alive.

Friday the 13th offences punishable by death:
(carried over from part 2)

1: Smoking Pot
2. Drinking
2. Pre-marital sex
3. Being a tool (see: the Steve Christy character)
4. Using the bathroom after sex
5. Trying to get laid, and failing
6. Opening Camp Crystal Lake despite everything everyone including crazy Ralph has been telling you.
7. Having the name Kevin Bacon

New*
8. Being crippled and trying to overcome your handicap via some poon tang
9. Tying a sweater around your neck (legend has it yuppies got so scared from this they stopped doing it)
10. Letting your pet bunny live in the produce department of your sh*tty mom and pop grocery store.
11. Drinking sunny delight
12. Taking a sh*t without wiping
13. Using “Class of Nukem High” as your fashion template
14. Thinking that a girl will like you if you repeatedly fake your death around her and scare the sh*t out of her as an under water hockey goalie
15. Walking around on your hands when you have f*cking feet that do the same thing
16. Reading Fangoria after sex. Everyone knows Fangoria is bathroom reading; Gorezone is what you want after a good ass pounding