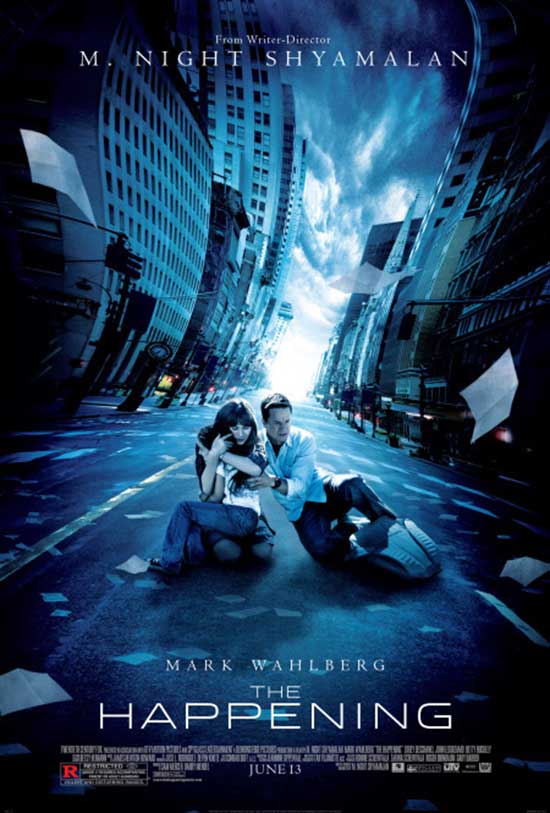 A science teacher, his wife, and a young girl struggle to survive a plague that causes those infected to commit suicide.

If you ever wanted to see what happens to a director’s career when he piques with his first movie, look no further than M. Night Shyamalan. He exploded on the scene with The Sixth Sense, which so far has ended up being his best movie. He followed that up with Unbreakable, which seemed like people were more divided on. Each movie he made after that seemed to be a little worse than the one he made before. Fans and critics alike derided The Village, The Happening, and Avatar: The Last Airbender.

Instead of accepting the criticisms of his flicks, he implied that American audiences were too stupid to understand his films. It was like his oversized ego couldn’t handle the sad truth that his movies started to seriously suck, and his career seemed to be over at that point. With this review, we’re going to cover one of the movies made when he was at his worst, The Happening. (Full disclosure: I’d rather be reviewing the 1970s sitcom “What’s Happening” than actually reviewing M. Night Shyamalan’s The Happening.) 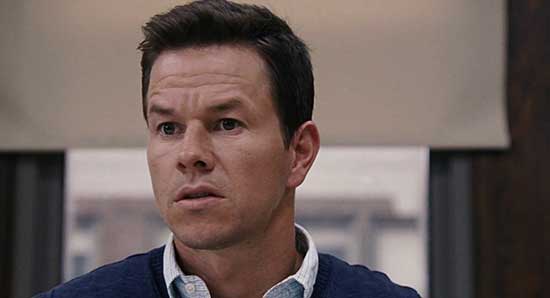 The Happening was Shyamalan’s first foray into making an R-rated film and his first attempt at making a straight up horror movie. The flick follows Elliot Moore (Mark Wahlberg), a science teacher who is trying to take his wife and daughter out of Philadelphia. Something is causing people to commit mass suicide in rather gruesome fashion, and this strange epidemic is spreading across the northeastern region of the United States. The government believes that the cause is a bio-weapon released by terrorists, but they’re not really sure. Elliot’s efforts to get his family to safety keeps becoming more difficult and desperate. He eventually figures out that it’s actually pollen from plants behind the chaos, which only intensifies his own terror. Apparently, the flora of planet Earth doesn’t like how the fauna is treating it and is going to do something about it. 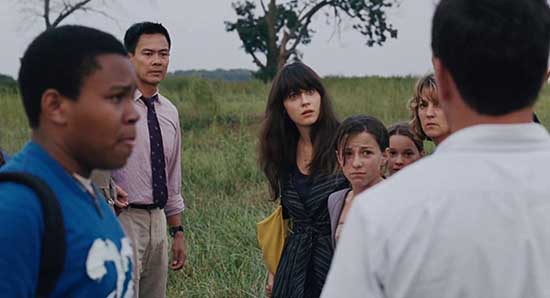 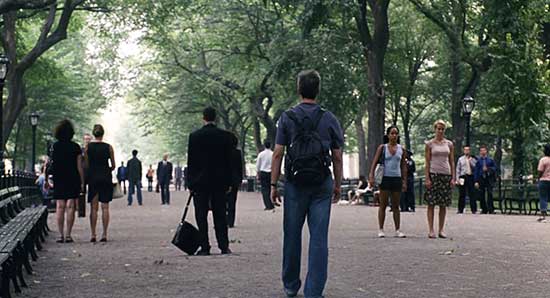 There’s something about the overall concept at the center of the film that too ridiculous to take seriously. You have to believe that normally benign plant life can suddenly release a pollen that makes people want to shoot themselves in the head or lay down in front of a wheat thresher. Not only does it not make any sense on any level, but you have to stop asking logical questions for it to work. The moment you start wondering “Why did the plants wait until now to do this? How is this scientifically possible? How did they gain the ability to release something that can affect the human mind so?”, the movie has lost any chance of being remotely plausible. If you manage to avoid applying common sense, you’re still going to find it hard to not laugh when people are acting terrified by a change in the wind.

One of the many things negatively impacting the quality of the film is the acting. I’ve never been the biggest fan of Mark Wahlberg as an actor, having found him tolerable at best. Not so much here. He applies absolutely zero subtlety or nuance to his performance, even when a scene calls for it. That is, of course, when he actually tried to do any kind of emoting. I began to wonder if he actually took the movie seriously (and I wouldn’t blame him if he didn’t). There were times when his attempts at looking concerned made him look like he was in desperate need of a stool softener, which only caused me to chuckle. His character also came across as being weak, dumb, and showed the leadership skills of a lemming. Considering he’s the one that everyone’s looking to for direction, it’s a miracle that he didn’t lead those around him into their certain doom. 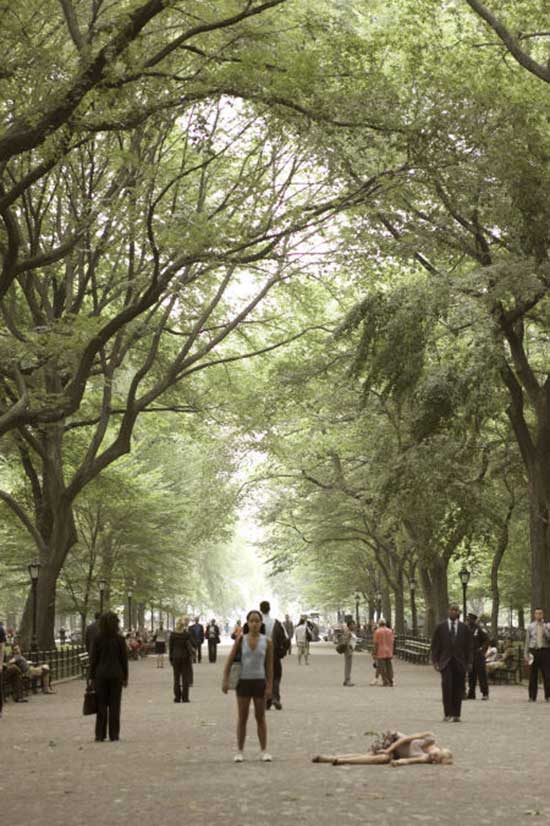 Zooey Deschanel, who played his wife, was wasted here. Not that I ever thought she was the best actress ever, but she really didn’t seem to show much of an emotional range. She came across as detached most of the time and didn’t seem to have much to do. I guess the idea was that her behavior is supposed to reflect that she and her husband are having troubles in their marriage, but it doesn’t do enough to explain or excuse Deschanel’s apparent lack of effort. When the best thing you can say about her presence in a movie is that you think her eyes are pretty, there are problems. 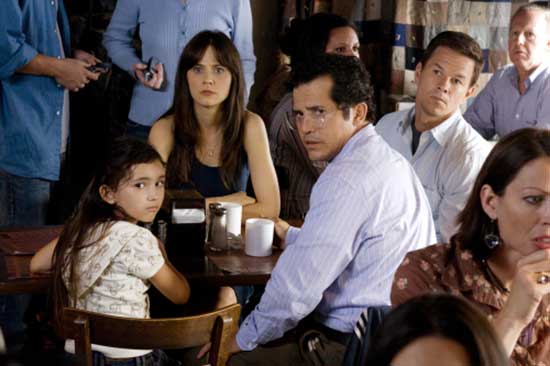 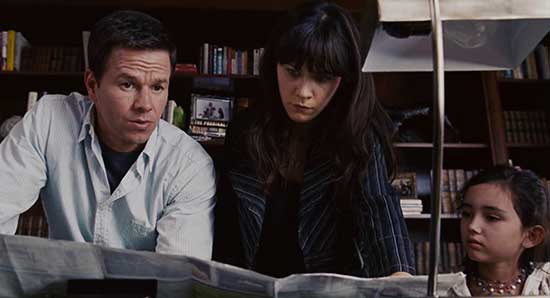 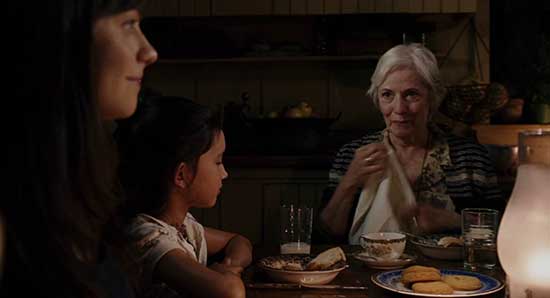 The rest of the cast isn’t much better but don’t worry, you won’t care enough to notice. The movie will take you from one preposterous scenario to another, asking you not to roll your eyes at the silliness of it all. The film is an increasing series of events that barely forms a full story by the time the end credits roll. By then you’ll either be asking yourself why you sat through this mishmash of chaos, or you’ll be asking if Shyamalan was trolling us for the movie’s entire runtime.

The Happening (2008)  is one of those movies that you might find entertaining if you enjoy movies that border on the “so bad it’s good” territory. It can also be fun if you’re into a little schadenfreude and like seeing the downfall of a one time Hollywood golden boy after his ego went out of control. Other than that, there’s really nothing worth sitting through. There are much more entertaining “bad” movies out there you can watch.