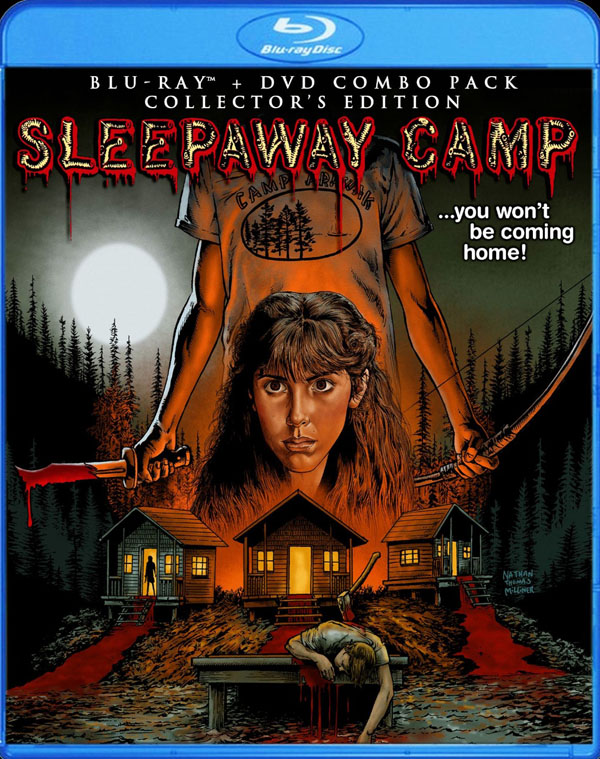 Angela, the only survivor of a horrible boating accident that claimed the lives of her father and brother years ago is now a teenager and is about to go to summer camp for the first time. Once she arrives at Camp Arawak with her cousin Ricky she becomes the target of ridicule and cruel pranks at the hands of her fellow campers. Everyone picks on her including her bitchy fellow camper Judy (the popular girls all the guys want to be with), “bad boy” Kenny and his group of friends, and even Meg, who is one of the counselors. Soon all of those who have mistreated Angela are being killed off in all sorts of gruesome and brutal ways by an unseen person. Who is behind the murders? Is it Angela getting back at her tormentors? Is overly-protective cousin Ricky responsible for all the deaths, or is there something far more sinister going on at Camp Arawak this year other than macaroni art and awkward camp socials?

I love slasher flicks, especially if they were made sometime in the 80’s and take place at summer camp. Fortunately for me there are many, many movies that fit this bill such as “Friday the 13th” (and most of its sequels), “The Burning,” “Madman,” and tons of others. Without a doubt my favorite out of all of the summer camp slasher flicks (and my favorite movie of all time) is “Sleepaway Camp.”

There is so much that I love about “Sleepaway Camp.” that I don’t even know where to begin. I saw it for the first time when I was in middle school at it has been my favorite movie ever since. It is one of those films that I could watch over and over again (and I have) and it never seems to get old. I hold it responsible for being one of the main reasons that I love horror movies so much and it will forever hold a special place in my heart. 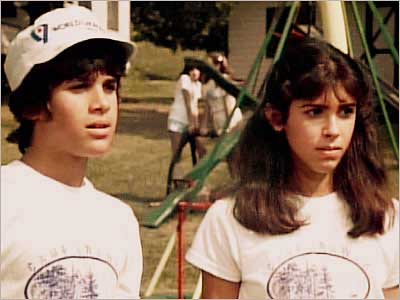 I have heard a lot of people claim that it is just another “killer on the loose at camp” flick and there is nothing special about it. I couldn’t disagree more with this as I feel that there is just something different I can’t quite explain about it that makes it stand out. Yes, it has a similar plot to a lot of other movies out there, but the writing, characters, death scenes, and (especially) the ending helps put it in a class all its own. I have a friend who argues that it’s just a “Friday the 13th” rip-off but in my opinion he couldn’t be more wrong. I love “Friday the 13th” and am a huge fan of the series but I just believe that “Sleepaway Camp” is a better movie (Man, I’m sure I’m going to get a lot of hate mail after that bold remark). 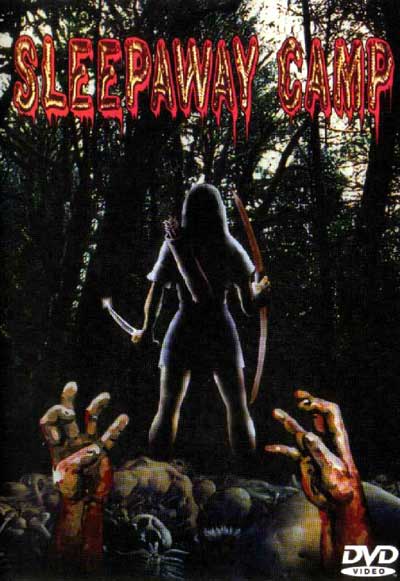 One of the main things that makes it such a great movie is the fact that it has a great cast of characters. Felissa Rose is excellent as the poor, mistreated Angela. She does a great job of playing the creepy, odd girl who doesn’t quite fit in with anyone. She doesn’t have a whole lot of dialogue as she spends quite a bit of the movie just staring at people in silence and making them uncomfortable, but once she does begin to speak we can see what a talented actress she is. She has since gone on to do several other films and has become quite the attractive young lady. Jonathan Tiersten does an equally impressive job as Ricky. He is a very intense character and you have to respect the fact that he is so protective of Angela (plus it’s pretty cool that he has such a foul mouth). If I ever have a son, I hope he’s just like Ricky. While Tiersten hasn’t done as much work in film as Rose he has gone on to pursue a career in music. If you haven’t
checked out his band Jonathan Tiersten and Ten Tiers yet I highly recommend that you do so as they are extremely talented. 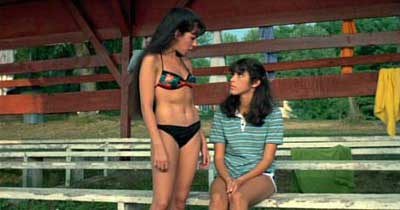 There are many more wonderful characters such as Mel, the gruff camp owner, Artie, the camp cook/pedophile, Ronnie, the friendly head counselor, the clueless Kenny and his group of loser friends, Aunt Martha, Ricky’s kooky mother who takes Angela in at a young age, and Meg, the counselor who goes out of her way to make Angela’s life miserable (can someone explain to me why it is she has a thing for Mel?). Other than Angela and Ricky my other favorite character is Judy, played perfectly by Karen Fields. Judy is the queen bitch/camp slut of who quickly becomes the main source of Angela’s torment. She is a fun character that you can’t wait to see die (and believe me when I say her death scene is one that stays with you). I love Judy and think that any character that has a gem of a line such as “You’re a real carpenter’s dream! Flat as a board and needs a screw!” can’t be all bad. 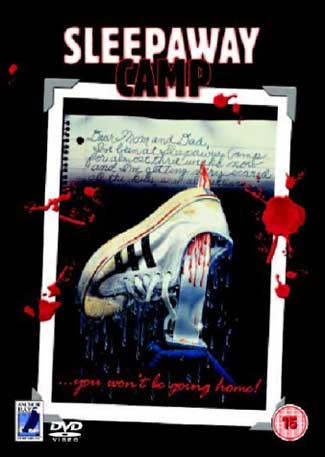 One of the things I like most about “Sleepaway Camp” is the fact that there is a pretty decent-sized body count and many creative death scenes. We are treated to several unique deaths involving such items as a pot of boiling corn (I know, it sounds silly but it is actually pretty cool), a curling iron (!), and a bee hive (which is probably my favorite). We also have your standard murders as well such as someone being shot in the throat with an arrow, a drowning, some young campers being chopped to pieces with a hatchet, a decapitation, and in a nod to “Psycho,” someone is stabbed to death in the shower (and it is quite gruesome). Needless to say quite a few people get killed in this movie, and each death is quite fun and enjoyable. 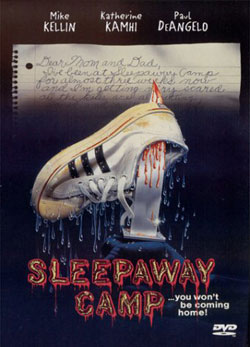 I don’t want to give anything away but I feel like I have to at least mention the ending of this movie. The final scene is one of the most shocking scenes in movie history and you will never in a million years see it coming (I know I didn’t). I don’t want to go into much detail about it as I don’t want to spoil it for you, but let’s just say that Robert Hiltzik (who wrote and directed the film) saves the best for last. The conclusion is quite disturbing and stays with you long after the end credits roll. 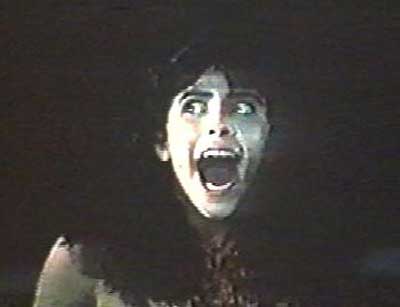 If you couldn’t tell I am a huge fan of “Sleepaway Camp.” I think it is one of the most underrated horror films of the 80’s, but thanks to the Internet it has established quite the cult following and is finally getting the recognition it deserves. It has spawned three sequels (which I also enjoy but not as much as the original) and there are rumblings of yet another installment in the future (which is fine with me, they can continue making sequels until the end of time as far as I’m concerned). If you haven’t seen this movie I strongly urge you to do so as it truly is a horror classic. After watching it I guarantee you will never look at a curling iron the same way ever again.