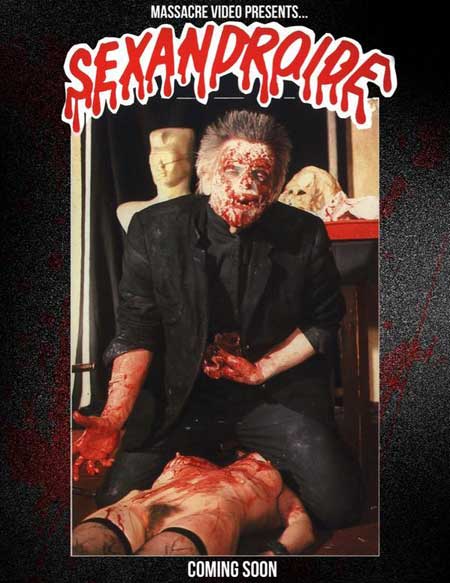 Welcome to the temple of fear and eroticism, as a monstrous madman slowly mutilates poor young girls! See the sensual act of voodoo preformed on an innocent bar patron! View the lustful bite of a vampire!

Originally marketed in France as blurring the lines between fiction and reality, this rarely seen, often talked about, shot-on-video classic is finally seeing an official DVD release. A unique and bizarre flick that defies easy classification, Sexandroide is a must for fans of extreme entertainment. Simultaneously sexy and sick, Sexandroide has it all.

I’m gonna start off by saying that Sexandroide is definitely a weird one. Directed by Michel Ricaud, whose main claim to fame is a long line of French adult films (with titles such as Allo Sodo 69-69, Wet Pets in Prison, and Pussy Roulette), this sixty minute film is comprised of three segments – I wanted to call them stories, but they’re not, they’re more like scenes taken from bigger stories that we will never see. They fall somewhere in between a Bloodsucking Freaks or Wizard of Gore style film and one of those sleazy Fantom Kiler movies, and throughout it is very obvious that this director usually works on the adult side of the movie world.

The first segment deals with a good old fashioned voodoo doll. We see shots of a woman drinking alone at a bar intercut with a photo of her on a table along with a lock of her hair, an earring, a hair pin, and one of her fingernails (I assume it’s a fake one, but then am a little lost on its relevance to the act). She goes to the restroom, not feeling well, and he starts to manipulate the doll, indirectly torturing her. He pushes a pin in the doll’s stomach, the woman throws up. He pokes the doll’s eyes, the woman cries tears of blood. He employs needles, candles, and string on the doll, hurting this unknown woman for unknown reasons… oh yeah, and one of his first acts is to tear the dolls clothes off. Of course. 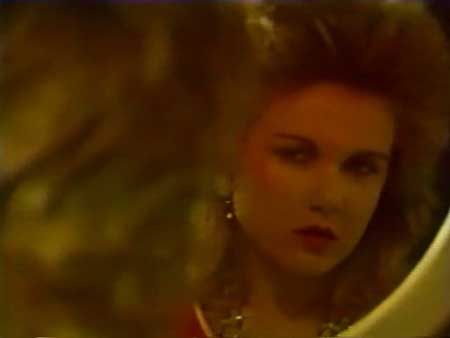 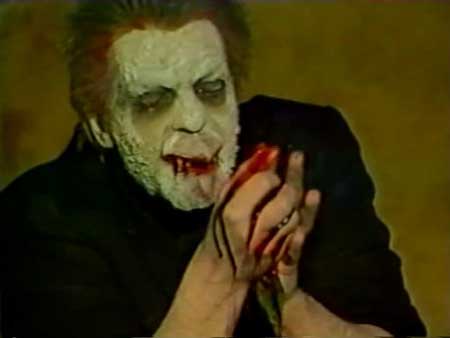 In part two, a scared woman creeps into a basement (to the soundtrack of Suspiria, if I’m not mistaken). She is confronted by a cloaked figure, so she shoots him, but he’s not dead, and he throws her to the ground and walks away. She gets up, sees a smoking skull on a table, and proceeds to kiss it, then remove all of her clothing (of course; what, you’d do something different?). It all turns into something out of a perverse magic show: the woman “picks up” fire, give an empty chair a lap dance (not the last dancing we’ll see in this movie, by the way), the guy takes his hood off to reveal he’s a demon/vampire/zombie thing, then pulls a rubber spider from the woman’s mouth and makes a flower bleed in his hand. Various needles pierce various parts of her body (mostly in the chest area). Eventually we get a Herschell Gordon Lewis-style eyeball removal, a self-inflicted disembowelment, and they live happily ever after. 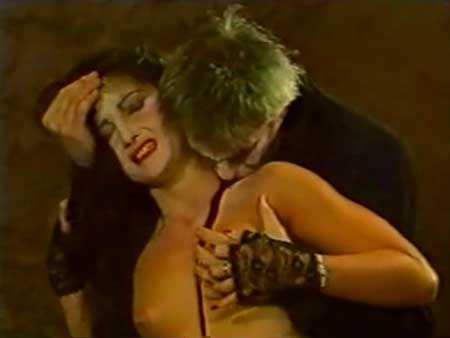 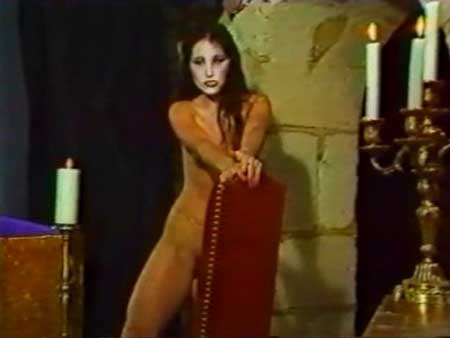 If either of the previous two scenes sounded a bit off the wall, just you wait. The third segment of Sexandroide is the weird one. A coffin is opened, and a mourning woman, looking a bit like Winona Ryder in Beetlejuice, comes in to pay her final respects. The man in the coffin foams at the mouth, wakes up, and grabs her. Turns out, he’s a vampire, and he bites her neck (after taking all of her clothes off of her – of course). She collapses, and he returns to his coffin. End of story, right? Nope. The woman gets up, pale face indicating she is now dead (?), and proceeds to do what appears to be a stripper’s routine to not one, but TWO Tina Turner songs, while the vampire watches coyly from his resting place. Eventually – SPOILER ALERT – she climbs in the coffin with the vampire, hangs a “Do Not Disturb” sign, and closes it up to a soundtrack of moans and groans. Wait, it was a soundtrack of moans – those groans were my own. 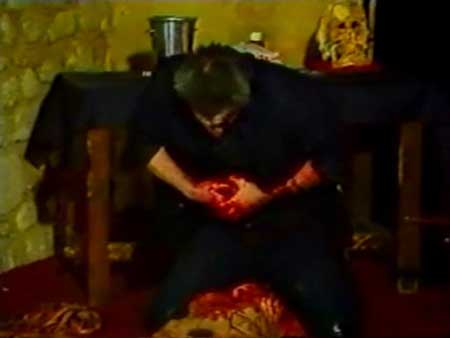 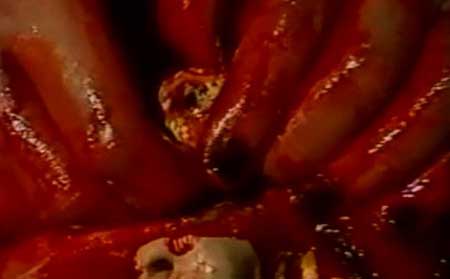 What more can I say about this movie? It’s both horrible and hilarious at the same time. It’s completely ridiculous, not at any point scary or even creepy (with the exception of the Goblin music, but we shouldn’t confuse our feelings about Dario Argento’s masterpiece with how we feel about this schlockfest), and is an obvious vehicle to show off boobs and blood. There’s pretty much no dialogue, and each scene pretty much utilizes only one setting, so it often feels like a stage play – a really bizarre, perverted stage play. If you can find Sexandroide, you should watch it. It needs to be seen. It’s not good, but I can almost promise you’ll enjoy it.