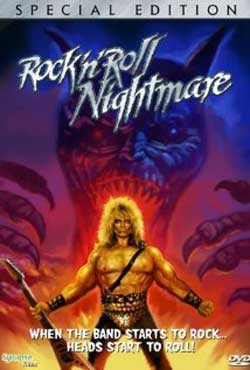 A hair metal band heads out to the middle of nowhere to record their newest album only to be picked off one-by-one by a demonic force led by Satan himself.

Rock ‘n’ Roll Nightmare is one of those movies that takes a lot more shit than it probably should. Yes, it is quite bad and unintentionally funny at times due to the fact that it looks like it was shot for around $12.00 (and believe me I am being very generous here as I don’t think that the people behind it even spent that much) and the acting is nothing short of atrocious (it is so bad it makes the acting in your typical episode of Saved by the Bell look awesome in comparison). 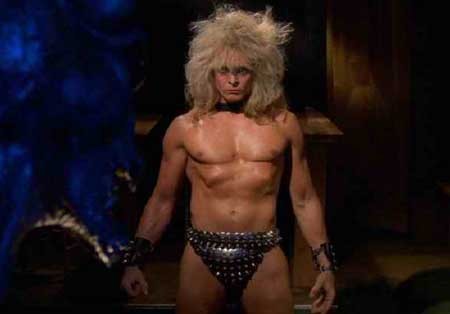 The plot is all over the place (especially when it comes to the big twist toward the end that just comes out of nowhere and is just plain bad in every possible way) and overall this movie is on the same level of horrible as films such as Troll 2 and The Room. With that being said there is just something about it that I have always liked for some reason that I don’t think I will ever understand. Despite how bad it really is I think that it is a fun movie (partially due to just how ridiculous it is) and I always make sure to watch it when the opportunity presents itself. I have shown it to people who either hated it or fell asleep halfway into it because they were that disinterested in it but in all honesty I think that every horror fan-especially those who like cheesy heavy metal-themed ones-should watch it just so they can say that they have seen it. 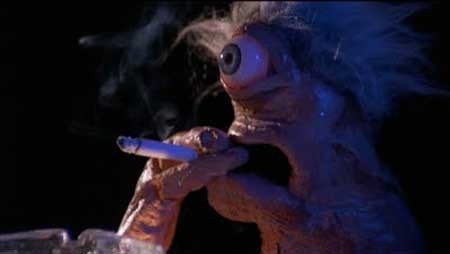 I’ll admit that the plot makes very little sense if you think about it. We have a hair band going out to record their new album in the middle of the country at a barn in the country that is actually a recording studio. Why are they going out to the middle of nowhere to a barn/recording studio when they could surely find one within the confines of the city? I don’t know. Really, I don’t (and I don’t think that the filmmakers really knew either). Once they get there these claymation-type little monsters (who are actually demons sent by Satan himself) start killing off members of the band until only the lead singer (played by the awesomely bad John Miki Thor who also wrote the script) is the one left standing (that’s right folks, we don’t get a final girl this time around. We get John Miki Thor and his awesome hair to root for in the end) to stop Satan’s evil plan (I did mention that Satan makes an appearance, right?).

The final confrontation between Thor’s character (who isn’t exactly what you think he is) and the devil (and his puppet minions) has to be seen to be believed and is probably one of the unintentionally funny moments ever caught on film in the history of cinema (I don’t want to spoil anything but there is a part where these little starfish-like demons are being thrown at Thor and he catches them in mid-air and sticks them on his body then tries to act like they are hurting him). If you can make it through the film until the big battle at the end I promise you that it is well worth it because it is so painfully bad but also completely freaking awesome at the same time.

Without a doubt the best thing about the movie is John Mikl Thor himself who plays the lead character John Triton. He looks like a live action version of He-Man from the Masters of the Universe and in addition to being an actor/writer he is also a legit musician. When he isn’t making movies or acting as lead singer in a heavy metal band he’s busy blowing up hot water bottles like a balloon for his legions of fans (which is pretty much his claim to fame). He couldn’t act his way out of a wet paper bag but God love him, he certainly tries and is no stranger to bad movies (he also starred in 1987’s Zombie Nightmare which also starred Adam West and a pretty much unknown Tia Carrere that was shown on USA Network back in the day and was featured on MST3K at one point).

He chews up scenery like a freshly gassed lawnmower set loose on a yard in this movie and while it is obvious that he is most likely reading from a cue card most of the time he still does a bang up job for the most part in terms of just getting through the movie until he can get to the parts that promote his music career (which is not-so-subtlety done in way too many scenes). I know it may sound like I am hating on the guy but that is honestly not the case as I think he rules. I really wish he would reemerge and star in some new movies to be honest just because the best way to make a bad movie good is to add a little John Mikl Thor. We miss you, Thor! Please come back to us (you can even bring your hot water bottle with you). 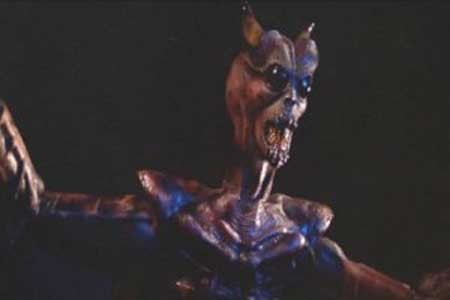 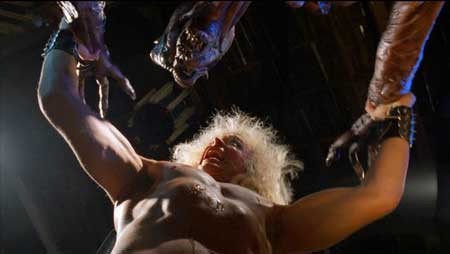 Don’t get me wrong, Rock ‘n’ Roll Nightmare is a bad movie. In fact, it’s a horrible movie that will actually make you wonder how it ever got made while you are watching it because in all honesty, it really is THAT bad. At the same time though it is a fun and entertaining movie, and in the end isn’t that the main reason we watch films in the first place? I think that you should definitely watch this movie because even though it isn’t good you will enjoy it. I had no idea that it spawned a sequel back in 2005 (called Intercessor: Another Rock ‘n’ Roll Nightmare which features the triumphant return of John Mikl Thor that I am going to order off of Amazon as soon as I am done with this review) and think that it has that much of a following that someone wanted to do a follow-up film. Check it out as soon as you can and while you may not think it is a good movie you will totally have a good time while you are watching it.