Home | Mobbed By the 3’s: Halloween III: Season of the Witch

Mobbed By the 3’s: Halloween III: Season of the Witch

Right now you are probably asking yourself “What is Mobbed by the 3’s, and why am I reading it?” This would make sense, as this is the very first installment of my new Horrornews.net column. “Mobbed by the 3’s” is the title of a song by the San Pedro, CA punk band Toys That Kill, and they have kindly let me borrow it. As far as this column is concerned, we’ll be looking at the infamous “part 3’s” of horror franchises. Why part 3? Because, more often than not, this is when the franchise goes a little mad, jumps the shark, flips the cast, or in some bizarre way causes even the most diehard fans to scratch their head as they leave the theater (speaking of, Die Hard With a Vengeance is a pretty good example…). So this column will get into the legendary mysteries that are “part 3’s,” and we’ll do so with some humor, some speculation, and no doubt some spoilers as we attempt to figure out how we got here. There will be some guests along the way, maybe we’ll even make up our own part 3’s. But enough over-explaining, let’s go get mobbed by the 3’s…

Today, we will be discussing the infamous, much maligned, controversial Halloween III: Season of the Witch, the movie to which the phrase “It would have been good if it had a different name” was first applied. While I don’t have historical proof of that statement, you know you’ve heard that line before. Hell, you may have even said it.

How did we get here?

I’m sure anyone who has ever seen a movie has seen the original Halloween. It’s pretty much legendary: we’re talking Michael Myers, Jamie Lee Curtis, John Carpenter, and that theme song that you hear everywhere around Halloween. It also has a remake that is legendary for different reasons, but that’s a discussion for later. In Halloween (1978), a young Michael Myers kills his sister, gets put away in a mental institution, then eventually escapes, only to return to his hometown of Haddonfield, IL and start killing. Dr. Loomis (Donald Pleasance), either a master of the mind or a mad man, depending on your interpretation, hunts him down and shoots him, a famous not-quite-killing that is a cornerstone of the slasher genre.

It’s even created a very descriptive metaphor, as seen in Stephen Graham Jones’ horror novel, The Last Final Girl: “The ground below is that Haddonfield kind of empty.” In Halloween 2 (1981), a direct sequel picking up the moment the first film ends, Michael Myers returns again, going after Laurie Strode (played by Curtis again), who we learn is Myers’ younger sister, as well as any hospital staff or patients who get in the way. Tops are removed, blood is shed, and in the end, Loomis and Myers blow up. The end. Which brings us to… 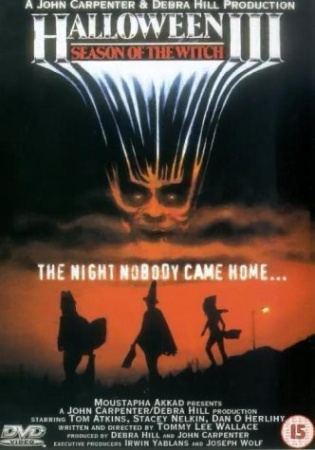 Halloween III – Season of the Witch

Is there a more despised movie than Halloween III? You could make a movie about a guy dressed as Santa Claus who kills kids’ puppies right in front of them, and it wouldn’t spawn the rage that Halloween III has. The complaints seem to always deal with the fact that there’s no Michael Myers, sometimes followed by the infamous “if it was called something different I might like it” excuse.

Halloween 2, for all intents and purposes, was supposed to be the end of Michael Myers. That had been the plan of director John Carpenter, anyway, and who are you to say he was wrong? His idea was to continue the Halloween franchise, but each year tell a different Halloween-related story. So technically, Halloween III is exactly what it should be according to the original plans. Instead of Michael Myers, we’re dealing with a mask making company called Silver Shamrock, who has harnessed the mystical powers of Stonehenge and, combining witchcraft with technology, is ready to take over the world, or at least kill off a whole ton of American kids.

How, you might ask? By implanting a microchip in their best-selling masks, and convincing the kids to tune in to TV at 9:00 pm Halloween night for a giveaway that will send waves out that somehow turn those mask-wearing faces into bugs, snakes, and mush (I assume that, much like in Gremlins 2: The New Batch, if there had been a sequel to Season of the Witch, we would have discussed the time zone issue, as well as many other things).

They’ve also replaced many of Santa Mira’s residents with androids (adding to the poor town’s bad luck after Invasion of the Body Snatchers saw most of them replaced by alien lookalikes). And Silver Shamrock just might succeed, if not for that meddling Dr. Dan Challis… or maybe they still will.

Lots of familiar Halloween names appear in part 3. Michael Myers is technically in the movie, he’s just seen on a TV in a bar during a trailer for Halloween. Dick Warlock, who plays Myers in part 2, plays an assassin. Jamie Lee Curtis is the voice of the operator. John Carpenter and Debra Hill play the role of producers, not writers and directors this time, but Carpenter does still create a bunch of the music. And the director is Tommy Lee Wallace, voice of Silver Shamrock commercial announcer, longtime Carpenter production assistant, namesake of the little kids from part 1 (Tommy Doyle and Lindsey Wallace), and husband of Nancy Kyes (Annie in part 1, Mrs. Challis in part 3).

Part 1 was tagged with “The night he came home,” in reference to Michael Myers. Part 2 got the tagline “More of the night he came home,” which while kind of a cop-out is technically accurate. But part 3 brings us “The night no one comes home,” a tagline displayed just below silhouettes of children in costumes carrying their trick ‘r treat bags. Talk about ominous. And here are two more words for you: Tom m’f’n Atkins. Forget Laurie Strode, Danielle Harris’ Jamie Lloyd, Paul Stephen Rudd’s Tommy Doyle, even Busta Rhymes and LL Cool J (for real, Busta Rhymes and LL Cool J show up in later Halloween films, and people think that this is the bad one?); it is entirely possible that Tom Atkins as Dr. Dan Challis is the one person who could have defeated Michael Myers. He probably would have even done it with one hand, not because he’s that tough, but because he’s always answering the phone with his other hand.

Forget Loomis’ extensive files on Myers, Dr. Challis knows the phone number to “TV.” I mean, we saw what he did down the road when the ghosts came for revenge on the town, back when he went by the name Nick Castle in The Fog (the real Nick Castle is the guy who played “The Shape” in the original Halloween). If he could have focused his attention on Myers, rather than letting his eyes wander toward every single female in the film, we may have saved ourselves quite the clusterf*ck of sequels…

Where do we go from here?

…but we didn’t, and instead we have Halloween 4 & 5, The Curse of Michael Myers, H2O: 20 Years Later, Resurrection, and re-makes of the original part 1 and 2, all of which have Michael Myers back in them.

Part 4 was supposed to be pretty creepy, going into the psychological after-effects of Michael Myers having haunted the small town of Haddonfield. However, Carpenter and Hill’s idea got turned down, at which point they bailed. Seems to me like a good time to call it quits, but instead we get a re-written movie that brings back not only Myers, but also Dr. Loomis. How? They just reinterpreted the end of part 2, scarring up Loomis and putting Michael in a coma. We also get the screen debut of Danielle Harris as Jamie Lloyd, Myers’ niece, meaning Laurie’s daughter, except that Laurie died. Or she didn’t, and maybe that death was faked. But with each new movie, more of what happened before is crossed out and the fans are essentially asked to forget about it. Part 4 asks us not to remember the end of part 2. The Curse of Michael Myers (what would be part 6) goes into an explanation of, well, a curse, and we start to better understand not only why Myers won’t die, but what caused him to be the way he has been since part 1 (a way better story than the generic, drawn-out explanation of the part 1 re-make), but then H2O comes along and asks us to forget EVERYTHING that happened in parts 4, 5, and 6. And by the final installment of the series, Resurrection, who really cares anymore?

Apparently Rob Zombie cared, and he went from his homage-filled House of 1,000 Corpses and the disturbing The Devil’s Rejects, to crapping out a remake of the not only part 1, but part 2 as well, the first having an unnecessary back-story attached to Myers, and the second one just confusing everyone, with ghosts and white horses and whatever else was in that taste of a bizarro-world Haddonfield. It was so strange, I can’t honestly tell you what it was about. I don’t even know that I want to commit to saying whether it was bad or good. Maybe if it had been called something else, it might have been a good movie…