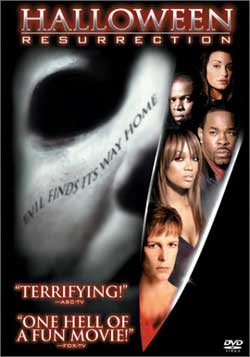 When a group of college students win a contest to spend the night in the childhood home of serial killer Michael Myers, they expect a few scares but none of them are prepared for what awaits them. The house has been rigged with cameras as they are to be broadcasted live over the internet to be watched by millions. As they wander around the house in search of some kind of answer for Michael’s murderous actions they find a bigger problem. Michael has come home and he does not intend to let anyone leave his house alive.

It’s been three years since Michael’s last stabathon, when he tracked down his long lost sister in Summer Glen, California. But it’s Halloween, errr, close to Halloween, again, and tonight Michael has reappeared to fulfill his destiny. Halloween: Resurrection, the eighth entry into the franchise, begins at Anderson Sanitarium with the now institutionalized Laurie Strode(Jamie Lee Curtis). Curtis, just as in Halloween, Halloween II and H20, once again gives a prominent performance.

Amongst dialogue between two nurses, we soon detect that Strode wrongly decapitated a paramedic, not Michael, at Halloween: H20’s finale. Myers pulverized a paramedic’s larynx, put him in his mask and coveralls, and let Strode take the wheel as Michael slid quietly within a forest of pine trees. Not the most satisfying or plausible of explanations, but it is enough to explain why this series is still active and to warrant this follow-up.

Michael is more diligent in the opening sequence than he has been since Halloween II (Also directed by Rosenthal). Unlike the past sequels he feels more like “The Shape.” Laurie, gone from a vibrant girl to a worn being, has one final showdown with her butcherous brother that finally lays the bloodline to rest. It’s all expeditious and in fact only occupies the opening fifteen minutes of the film. I also might add that the opening scene is by far the strongest portion of the feature. Our heroine is no more, so what direction should the Halloween series now take? The year was 2002, and networks were flooded with reality programs, so that was the obvious move to take. Michael Myers + reality television = one cool, hip feature.

Busta Rhymes(God, help us all) stars as Freddie Harris, and he’s joined by a group of Hollywood hopefuls which include Bianca Kajlich(Sara Moyer), Sean Patrick Thomas(Rudy), Katee Sackhoff(Jen), and Daisy McCrackin(Donna). Chances are you’ve probably never heard their names mentioned elsewhere. Tyra Banks(Nora) also has appearances as Freddie’s assistant. Boy, I bet she regrets taking this role. Together, the two run “Dangertainment”-an online reality channel. Their first assignment- having their contestants explore the childhood home of serial killer Michael Myers. (I would have assumed that Haddonfield would have tore down the house. I mean, wouldn’t they want all traces of Myers banished from their town?) After a round of interviews and little character development, the group of misfits are walking through the front door of evil, equipped with camera headsets and the works. But this is not just any night, it’s October 31st, and Michael has come home.

“Audiences will see only what you see,” exclaims Harris when describing the “Dangertainment” program. And he’s right. Scenes of the film are intercut with footage from the actors cameras, showing all from their static filled perspective. Although this makes for some unconventional angles and movements, after so long you’ll find yourself bored with the setup. It’s also pathetically noticeable how this begs for the audiences attention. Not “Dangertainment’s” audience, but Halloween: Resurrection’s.

Our leading lady, Sara Moyer, is unenthusiastic about her involvement in the expedition. It’s fine that she’s not into it, but this makes her character come across as snobbish and bland. Don’t get me wrong, none of the characters are full of life or remotely intriguing. So she camouflages in well. As the group continues to explore the house, onlookers on the World Wide Web observe. Sara’s internet love interest, Miles(Ryan Merriman) watches and also communicates with her via text messages. It doesn’t take a brain surgeon to figure out what’s about to happen. That is the fatal wound for this film. It’s predictable as hell.

Michael isn’t too keen about these rejects trampling around his dilapidated house. And I for one do not blame him. So it doesn’t take long before he pulls out that trademark blade of his and gets to work. For a Halloween movie, the death sequences are reasonable in the gore department. We get some stabbing bodies to doors, impalements on metal rods, beheadings, knives in heads, and skull crushings. (Thankfully, the death of Tyra Banks was cut from the finished film. Look up the clip online- her acting is atrocious!) But of course the online watchers think these are all staged gags to attract viewers. It’s actually quite comical to have a character die, and then show people applauding at their computer monitor. The film also manages three chase sequences, which venture from an underground tunnel, house/basement, and roof. Not to shabby.

As Sara is perused by Michael, she relies on the messages from Miles to guide her through the death trap. This creates some tension and adds to her vulnerability. As an actress though, Kajlich is not strong enough the carry a film and be the final girl. Rymes was horrible as well. Anybody karate chopping Myers in a Halloween movie deserves to meet their end. And I’m not even going to mention his lame one liners. None of the actors were exceptional after you look past Curtis, and the direction by Rosental was just mediocre. It seems he’s lost his touch since his Halloween II days. The movie as a whole feels like a gimmick.

There is a sequence worth mentioning, where a group of trick r’ treaters place a jack o’lantern on the front porch of the Myers house. This 30 second shot captures the essence that made the original Halloween a great watch. Sometimes simplicity is key. Other scenes come and go with some interesting bits. There is some comedic relief, and it is interesting getting a tour of Michael’s house. The ending on the movie is the weakest of the series, excluding Halloween 6. In fact all of the alternate endings on the DVD are a yawn. Seeing Sara yield a chainsaw and scream, “This is for all of them!” is downright ridiculous.

Panned by fans and critics alike, Halloween: Resurrection may not be one of the strongest of the bunch, but it does hold some redeeming qualities. Myers’s mask is a cut above the rest. The production design of the Myers’s abode is top notch. The classic Halloween theme comes into play, this time conducted by Danny Lux. It is a shame that many disregard the eighth Halloween movie as a failure. Sure, when compared to the original 1978 movie Resurrection is an abomination. But so are the other sequels if you’re judging from that mindset. This is only a brainless “kill teenager movie.” Nonetheless, it’s still an entertaining popcorn flick.