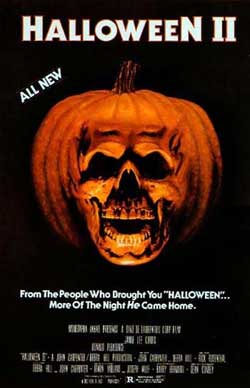 This bloodier sequel picks up where the original ended. An injured Jamie Lee Curtis recuperates in the hospital not knowing that murderous Michael Myers is licking his wounds in a nearby room. The hospital setting makes for spooky sequences with Myers’ slow footsteps echoing loudly on the tile floor. The diagnosis for impressionable viewers: long nights of insomnia.

It had been three years since the groundbreaking horror film Halloween had shattered box office records and scared the living daylights out of millions. Time was overdue to discover more of what happened the night HE came home. Halloween II, again penned by Carpenter and Hill, picks up precisely where its predecessor left off. Scream queen Jamie Lee Curtis reprises the role that made her famous as the damaged Laurie Strode. Strode, bleeding and petrified, is transported to Haddonfield Memorial Hospital where she is treated by a skeleton staff. But Michael Myers wants to continue his deadly game of trick r’ treat, and it doesn’t take long for him to get on her tracks, and turn the desolate hospital upside down.

Donald Pleasence renewed his role as the infatuated Dr. Loomis. Again, he adds another flawless performance to his resume. Charles Cyphers(Sheriff Brackett) and Nancy Stephens(Marion Chambers) joined him in their return. Rick Rosenthal, who would later revisit the series with Halloween: Resurrection, took the helm. Halloween II is not executed as professionally as the first, but Rosenthal does a decent job recreating some of Carpenter’s trademarks. Long panning shots mimic those that were present in the previous installment. The screenplay called for the the action to be moved from suburbia to the darkened corridors of the hospital. It is also responsible for adding in a surprise twist that would induce the following films. Carpenter stayed true to his creation, and kept Michael in the shadows for a vast majority of the running time. Be sure to thank him for that.

Occupying the film are co-staring actors portraying nurses and doctors. Nurse Karen(Pamela Susan Shoop) is a personal favorite of mine. But Nurse Jill(Tawny Moyer) is a close second. Both have “killer” death scenes, too. A rarity in the horror genre, but the characters in this film are knowledgeable. Unlike the trite dumb blonde gets nude and dies scenario, which plagues the genre to this day. I want to see wholesome people that I can relate to. The nurses actually give effort in trying to escape- but soon learn that their tires have been slashed. (Good thinking Michael.) I’m thankful Carpenter concentrated on creating not only a tense script but people to inhabit it.

Michael abandons the butcher knife for a scalpel. It may seem to some that a meandering psychopath using such a small instrument may not be too frightening. But trust me, when he starts to have some fun you’ll think otherwise. Halloween II upstages the first in the gore department. Unlike H1, H2 doesn’t shy away from the red stuff. We get hammers to the cranium(Ouch!), needles plunged into eyes, victims completely drained of blood, and a noteworthy therapy bath moment where a nurse’s face is disfigured by scalding water. All in glorious close-up. Gore hounds will be pleased.

It’s not all blood and guts galore. A voluminous flow of suspense elevates the film from beginning to end. The audience can never be quite certain where Myers is lurking. In one particularly effective moment, he watches two nurses through a window in the nursery. Innocent infant babies so close to pure evil is sure to get pulses racing. Other moments involve Michael emerging from shadows and hiding behind doors. Simple, but raging with suspense. But the most nail biting sequence comes when the chase arrives between Michael and his wounded target.

If you thought the final chase in Halloween was spine-tingling, just wait. As the theme booms, Laurie is chased down the winding hallways of the clinic, through the basement, out into the parking lot, and back into the hospital.. Yes, impressive. Remember, this is all happening on the same ill fated night. So Laurie is a complete and utter mess, which raises the sympathy of the viewers. Just as in the first you’ll find yourself not only rooting, but praying for her survival. It’s rare for a sequel to match the original, but Halloween II achieved that status.

The relationship between Laurie and Michael changes drastically in Halloween II. She’s not just a random victim to be, but his sister. That’s right, Michael’s blood is pumping through our heroine’s veins. Sixteen years ago, Michael killed one sister(Judith Myers, in Halloween’s introduction), and now he’s come home to kill the other one. Obviously, when Carpenter wrote the original film three years earlier, his intentions were not to add in the family connection. But it works here, granted it may have rendered the rest of the series problematic.

This entry does have some aliments of its own. Michael’s mask is pretty dull, and for some reason has a yellow tint. It’s obviously a different mask that was used for this sequel. Dick Warlock, who donned the mask and coveralls the second time around, couldn’t quite match the walk of the original actor. But I will say this, he’s better than the next several stuntmen who followed in his footsteps. There is one scene that sticks out like a sore thumb. Authorities, along with Dr. Loomis, are dispatched to a break-in at the school.. We find that Michael has recently been there, and has written “Samhain” on the chalkboard. Now why would he bother to do that? Nothing ever becomes of this scene, and I feel the movie would have functioned better if it would have been left on the cutting room floor. Luckily, Halloween II is a well constructed film that hides its small defects well.

When Dr. Loomis arrives at the hospital to save Laurie, the climax reaches its peek. You’ll be “blow away” at the exciting finale in which Loomis sacrifices himself to save Laurie and finally kill Michael. (Although they would all later return for future sequels.) For now, it’s a satisfying and fulfilling ending that wraps everything up nicely. As Laurie is escorted to an ambulance on the morning of November 1st, 1978, we see that this night will forever shape the rest of her existence.

Halloween II is the second strongest film from the lot, only falling short of the impeccable original. Laurie, Loomis, and Michael, the definition of a Halloween film, are all present. Every supporting cast member gives a superlative performance, the direction and script are on que, and the death scenes are enough to quench the masses. Myers is as also as foreboding as ever. Suspense is plentiful, scares come by the bucketful, so what more could one want from not just a Halloween movie, but any horror picture?