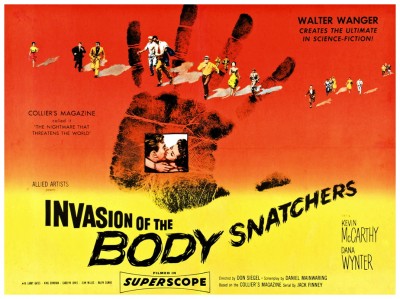 SYNOPSIS:
“Held by the police as a raving lunatic, Dr. Miles Bennell recounts to a psychiatrist the events that have turned his life upside down. He returned to his small town the previous Thursday, having been called back from a medical conference by his nurse, who was being flooded with patients. He arrives to find that most have canceled their appointments, but the few cases he does have all have the same story: someone close to them is acting strangely as if they had been replaced. Consulting some of his colleagues, he finds that these types of reports have been coming in all week and they conclude it must be some type of mass hysteria. However, when his friends Jack and Teddy Belicec show him a partly formed body they have uncovered in their home, he begins to realize that there may be some truth to the wild stories he has been hearing.” (courtesy IMDB)

REVIEW:
While mid-fifties movies like Forbidden Planet (1956) or This Island Earth (1955) remain favourites among fans, most ‘hardcore’ film buffs are more likely to cite Invasion Of The Body Snatchers (1956) as the best genre film of the period. Based on the novel The Body Snatchers by Jack Finney, it’s basically a variation on the old alien possession theme which had already been used in several fifties films like Invaders From Mars (1953), It Came From Outer Space (1953), The Quatermass Xperiment (1955) and Quatermass II (1957).

The film begins with doctor Miles Bennell (Kevin McCarthy) returning to his small Californian town after attending a medical convention, and noticing that a lot of the townspeople have ‘changed’ in some way while he was gone. After resuming a relationship with his one-time fiancée Becky Driscoll (Dana Wynter) he learns that she too is aware of something wrong in the town. Later, during a visit to friends Jack and Theodora Belicec (King Donovan and Carolyn Jones), a seedpod-shaped object is found growing in the Belicec’s greenhouse. When it opens it reveals a half-formed human figure in the exact likeness of Jack himself. Eventually it is found that there are many of these pods around town and that they represent an alien invasion of Earth. The pods adopt the appearance of people, then replace or incorporate them while the victims are asleep. Finally, the whole town is taken over with the exception of the doctor, who escapes to give the alarm the rest of the country.

Originally the film ended with him vainly trying to persuade passing motorists to stop and listen to his warnings, but the production company (Allied Artists) decided this was too downbeat an ending and insisted that further footage be shot showing him convincing the police of the danger. The studio-imposed flashback structure slightly softens the impact by leading us to believe that the invasion can indeed by stopped. Nevertheless, the highly contrasted black-and-white cinematography, oblique camera angles, claustrophobic compositions and carefully planned movements convey a disturbing sense of pervasive dread. It also questions what makes us human beings in the first place. Is it merely the shape of our body, the memories we share, or the little something that is missing in the eyes of the victims, such as true feelings like love?

Although Invasion Of The Body Snatchers is actor Kevin McCarthy‘s best-known work, he also appeared in more than two hundred other films and television shows. He was nominated for a Best Supporting Actor Oscar for his role in Death Of A Salesman (1951) and won a Golden Globe for Best New Talent. Mr. McCarthy was one of several actors (along with Dick Miller and Robert Picardo) who were frequently cast in the films of Joe Dante, and actually appeared as himself in the film Slipstream (2007), which contains several references to Invasion Of The Body Snatchers. Mr. McCarthy sadly passed away in 2010 of pneumonia at the age of 96.

Invasion Of The Body Snatchers was directed by Don Siegel from a screenplay co-written by Sam Peckinpah, both of whom have since gained cult followings as filmmakers. Peckinpah’s westerns, photographed superbly by Lucian Ballard, splattered with blood and symbology, have a lyrical detachment. With an amazing CV that includes Major Dundee (1963), The Getaway (1972), Pat Garrett And Billy The Kid (1973), The Killer Elite (1975), Cross Of Iron (1977), Convoy (1978) and The Osterman Weekend (1983), Peckinpah’s career has always been associated with its own myth of a grizzled and permanently embattled movie veteran who doesn’t mind taking on the front office when it suits him, but Peckinpah has made only one movie of detailed substance: Straw Dogs (1971) starring Dustin Hoffman and Susan George.

Siegel made a name for himself as a director of forthright, cynical, tough, low-budget thrillers during the fifties, and moved into larger scale productions in the late sixties, but retained the same themes, drives and economy. Riot In Cell Block Eleven (1954), Crime In The Streets (1956), Coogan’s Bluff (1968) and Escape From Alcatraz (1979) are not all that far apart from each other, except for the gradual swing from a liberal standpoint to a more right-wing law-and-order stance. Richard Widmark in Madigan (1968) is typical of his uncompromising independent heroes, suspicious of all organisations. A dedicated cop, he has no time for the niceties of the law. Clint Eastwood, the cop hero of Coogan’s Bluff and Dirty Harry (1971) is a loner, an outsider working within the system, but he is as cold-blooded and expressionless as the pod people in Invasion Of The Body Snatchers.

Jack Finney’s original novel has been adapted for the screen at least four times: 1956, 1978, 1993, and 2007. Contrary to popular belief, the novel actually contains a rather optimistic ending, with the aliens voluntarily vacating after deciding that they cannot tolerate the type of resistance they see in the main characters. Invasion Of The Body Snatchers is now regarded by many film scholars as a masterful piece of political allegory, but it’s difficult to say exactly which end of the political spectrum the pod-people are meant to represent. On the one hand, the film has often been interpreted as an anti-Communist movie that enacts Senator Joseph McCarthy‘s ideology of tracking down the enemy from within. On the other hand, Siegel’s only science fiction film can be seen as tackling the growing pressure toward conformity and standardisation present in modern-day America, as evidenced in a handful of frightening shots, each pod person is nothing more than a single cell, a small part of a bigger, single-minded entity.

I was lucky enough to meet Mr. Siegel on the set of the excellent thriller Into The Night (1985), who told me: “People are pods. Many of my associates are certainly pods. They have no feelings. They exist, breathe, sleep. To be a pod means that you have no passion, no anger, the spark has left you – of course, there’s a very strong case for being a pod. These pods, who get rid of pain, ill-health and mental disturbances are, in a sense, doing good. It happens to leave you in a very dull world but that, by the way, is the world that most of us live in. It’s the same as people who welcome going into the army or prison. There’s regimentation, a lack of having to make up your mind, face decisions. People are becoming vegetables. I don’t know what the answer is except an awareness of it. That’s what makes a picture like Invasion Of The Body Snatchers important.”

And it’s on that rather paranoid point I’ll bid you a good night, but not before thanking Cinefantastique magazine volume #2 issue #3 for assisting my research for this article. I sincerely look forward to your company next week when I have the opportunity to put goose-bumps on your goose-bumps with more ambient atmosphere so thick and chumpy you could carve it with a chainsaw, in yet another pants-filling fright-night for…Horror News! Toodles!

Invasion Of The Body Snatchers (1956)