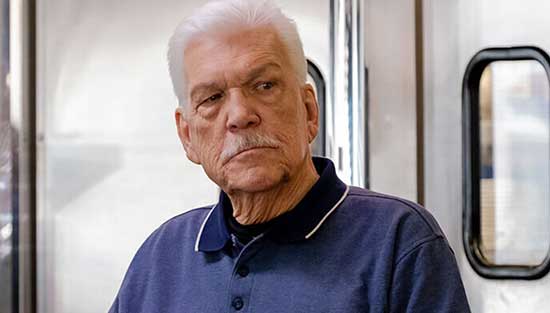 Actor Tom Atkins is a legend. He has starred in everything from Escape from New York, Halloween III: Season of the Witch, My Bloody Valentine 3D, Night of the Creeps, The Fog, HBO’s OZ.  Tom took time to speak with Horrornews.net. He talks about Trick and more.

Hi Tom, How are you?

I’m fine Janel. How about you? 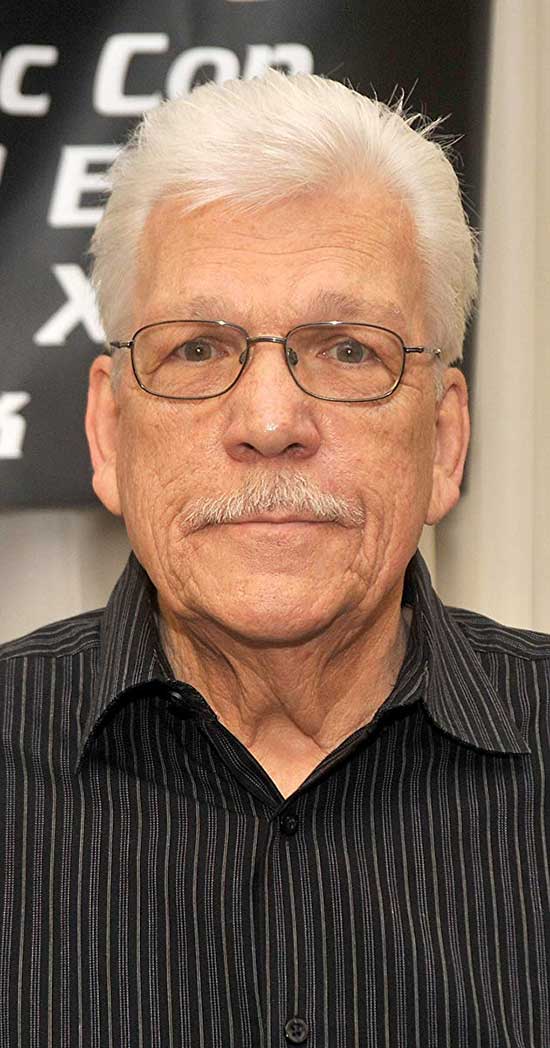 It is such an honor to talk with you. I grew up watching so many of your films. I love the work you do.

Tell me a little bit about the character, Talbott and how did you get involved with TRICK? You did an excellent job as always.

Tom- Thanks a lot. Patrick Lussier and I met here in Pittsburgh a number of years ago when we did, My Bloody Valentine 3D. We met in a coffee shop and he said I want you to play this sheriff in this movie. When I tell you how you die, you might now want to do it. I said, it sounds like a lot of fun. Let’s do it. I love Talbott, the old town curmudgeon who really adores all the kids in the town. He’d never show it or let on that he did. It’s obvious when you watch me do it, that I do. I think their terrific. Kids are the hope of our nation for god’s sake. The young people, so anyway. I try to protect them as the film is winding up and it’s getting a little more galloping for the curtain. I try to protect them but I’m not totally able to. I would go anywhere to work with Patrick. I love working with him. I feel like I’m with my brother when I’m with him. He’s a wonderful, easy guy to be with and work with. He’s a lovely director. I think all of his years being an editor for Wes Craven helped him become a fantastic director and writer. He and Todd Farmer seem to put me in every one of their films and Patrick assured me that in the next one, I will live the entire film, I will survive.

I hope so. I love Patrick and Todd. They are both so talented.

Tom- Yes they are.

Did you have to do anything special to prepare to play Talbott? Do you have any type of preparation that you do beforehand?

Tom- No I don’t, because I am in reality an old curmudgeon. So, I fit the part perfectly. 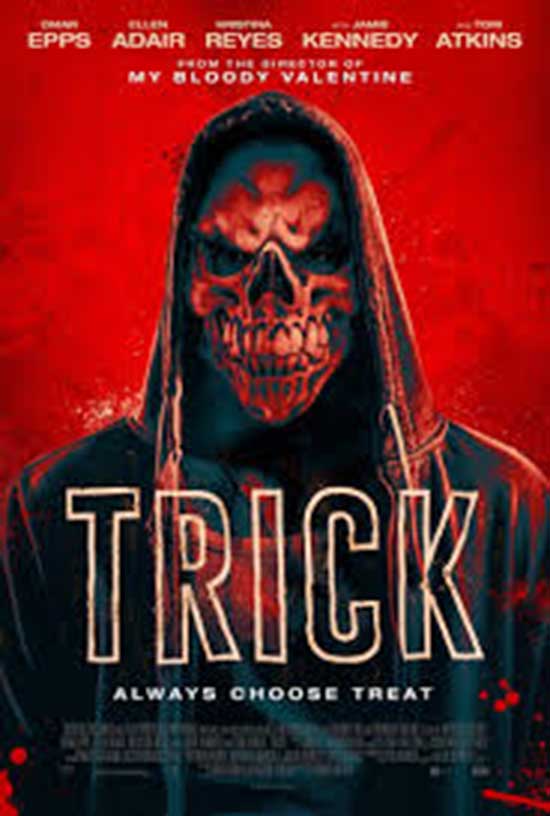 (LAUGHTER, he has a HEARTY wonderful laugh!)

That’s a good answer though! I love that! Being in reality and in the moment.

It’s what you do when you’re making a film. I think it was Jimmy Cagney or Spencer Tracy, one of the two back in the day. You go out and you hit your mark and tell the truth. Spencer Tracy was in a film and the director said, I want you to have a beard in this and Spencer said, I am not going to grow a beard. I don’t want a beard. The director said, it would be right because you are in prison a long time and you’d be scratching at your chin and Tracy told the guy, I will act the beard… You will think I have a beard just by the way I scratch my face. That’s what he did. I remember I saw the film and it looked great. I heard that story many years later.

That makes sense though. The actions, being in the moment, what you are doing and how you are reacting.

Tom- Sure. I did like a little film called Encounter, a sci-fi film two years ago. It just came out on Blu-ray and DVD. I play a biology professor. I’ve got to say that’s a role I was never invited to play before. It was different, I don’t carry a shot gun or shoot anybody. But, then again I didn’t really have to do anything. I’ve lived a whole life and I know what people are like. I am playing me but only the character. I’m different than me.

That makes sense to me. Do you have any advice for being in this industry? You have portrayed so many different characters and you are amazing.

Tom- Awww, Thank you. That’s very kind of you Janel. I’ve been doing this for fifty years. I’ve been making my living at it. It’s a privilege and a blessing in my life to be able to do what I have such a passion for doing at this late time in my life. My body still works good and I can run up the aisle of that church in Trick with that shot gun and try to help the kids. Chase the guy up the stairs and blast away. I’m lucky, I’m just lucky. I don’t really have any advice. It is not for me to tell anybody how to produce or direct or to act. I’ve just been lucky to be able to do what I love doing all my life.

Do you have a favorite one of your characters so far or do they mean something different to you?

Tom- Sure! Detective Ray Cameron in Night of the Creeps. He’s my favorite character. I got to see Fred Dekker twice last week. At the Beyond Fest and then at the premiere of Trick. That was wonderful. 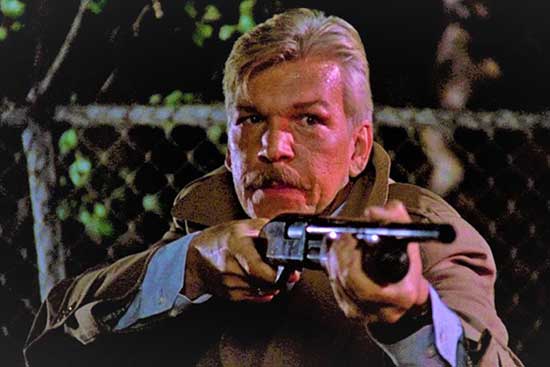 You have done so many films. You are such a big part of so many of our lives. Halloween III, Night of the Creeps, Escape from New York, The Fog, HBO’s OZ, Leathal Weapon. So many characters. What do you want to say to the fans?

Tom- (laughter) that is sweet. For all my fans, I am forever grateful for them because I wouldn’t have any kind of a life if it wasn’t for those same wonderful horror genre fans out there. They repeatedly show up to my films and they make them better. Halloween III, when it first came out and Michael Myers wasn’t in it, people were really upset. But, it has grown and grown in popularity over the years because of the fans. It’s a treat and it’s the Halloween movie that shows in Pennsylvania. It always shows up and the same with Night of the Creeps. It has grown over the years to where a lot of people love it and they made an action figure of me, thirty five years after we made the movie. How about that!?

I know. I love that!

I thank you so much for taking the time to talk with me for Horrornews.net – You are a legend and I thank you.

Tom- Thanks a lot Janel. Thank you so much. 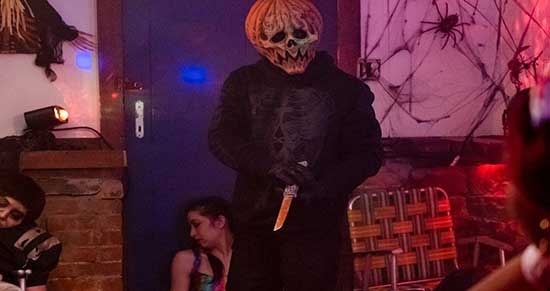 On Halloween night in 2015, Patrick “Trick” Weaver massacred his classmates at a costume party. After being arrested, he managed to escape police custody, but not before being shot five times by Detective Mike Denver (Epps). Everyone believes Trick must be dead, but when a masked killer reappears the following Halloween, and every Halloween after that, they realize the nightmare is not over. With Trick wreaking havoc and killing innocent people in increasingly terrifying ways, Denver will stop at nothing to finish what he started and bring the carnage to an end. 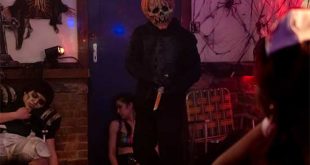