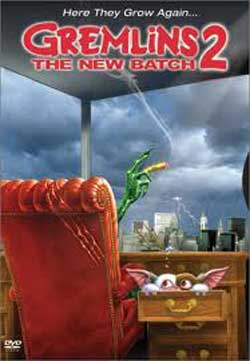 Six long years after their last appearance, Gizmo & company are back! But they’re no longer in Kingston Falls, they’re in NYC and have taken over a giant skyscraper as they continue their hi-jinks. Now as they are preparing to go wild on the streets of NYC, who is going to stop them? And how?

In “Gremlins 2: The New Batch” Gizmo ends up in NYC after his owner passes away and the building where he lived in is demolished. He’s alone in the street and terrified when he’s discovered by a scientist and taken to the massive Clamp Premiere Regency Trade Center & Retail Concourse building where the scientist works. In an amazing coincidence, Billy Peltzer (Zach Galligan) & Kate Beringer (Phoebe Cates) both work there! Once they discover the little guy they steal him away and bring him back home with them. Unfortunately, Gizmo gets wet before they find him and eventually that leads to the same results as last time as the nasty little gremlins manage to eat some yogurt after midnight and transform into green troublemakers that live to create havoc and nothing more. 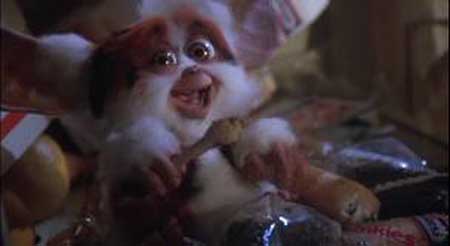 But since they were being housed (& experimented with) in a genetics lab located inside the building these gremlins have a variety of new abilities & immediately use them to wreak terror upon the building’s occupants. One of them has been given the mind of a genius and can speak as well (Tony Randall provides the hilariously droll voice for the “Brain” gremlin). His plan is to wait until sundown & release all of his gremlin brothers onto the streets of Manhattan where they will surely find a way to get wet & multiply! A wholesale takeover of NY is in the cards if that happens but Billy, Kate & Gizmo have other plans. At least they hope to think of one before the gremlins succeed anyway… 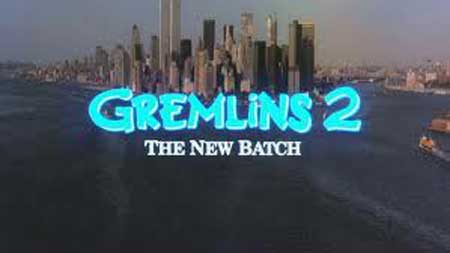 John Glover plays Daniel Clamp, a barely disguised parody of Donald Trump. It’s his monumental skyscraper that houses the research lab in which the Mogwai’s are experimented on and once the little buggers are on the loose he takes a pro-active approach to stopping them. He’s not one to sit and fiddle while his conglomerate burns and Glover plays him with a mix of arrogance, insouciance & wide eyed wonder. It’s a winning performance that helps rein in some of the wackier plot elements in the script. Galligan & Cates seem to be acting at the same speed here as they did in the other film, it might’ve helped if they showed a bit more aggression this time around but overall they perform well. Christopher Lee has a role here as Dr. Catheter, the head researcher at the “Splice O’ Life” lab where the Mogwai are experimented on. He plays the role as a bit of a doddering fool who’s in way over his head but won’t admit it. Robert Prosky has the best role in the film (In my opinion) as Grandpa Fred (A wickedly obvious take on Al Lewis’ Grandpa Munster of TV’s “The Munsters”). Clamp also has a cable TV station that broadcasts from his building and Fred is the host of a late night horror movie show. as the gremlins begin to take over he finds himself strangely drawn to them & they in turn elect him to be their conduit to humanity. He grabs a microphone & begins to interview the brain gremlin, broadcasting it worldwide for all of mankind to see. It could not have been easy acting in front of a puppet speaking back to him with Tony Randall’s voice but Prosky convincingly pulls it off without a hitch. I can’t say enough about Randall’s voice work either, he gives the brain gremlin a slightly British accent, dripping with disdain and yet there’s a sliver of hope in his voice when he speaks of being free to do as gremlins will do. In one hilarious scene he speaks of his desire to be “Civilized” like everyone else is and then calmly pulls out a pistol and shoots a mocking gremlin behind him before returning to his speech! 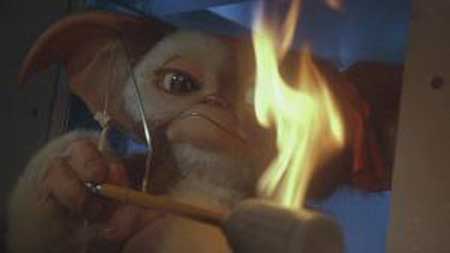 The biggest problem I had with this movie is it’s almost constant gag content. Once it builds up a head of steam it literally never stops tossing gags at it’s audience. Sight gags, physical gags, in jokes galore & homages to dozens of movies get tossed in every few minutes or so until you lose count of them. To catch them all in one sitting is nigh impossible, the film demands repeated viewings to be fully appreciated. But I thought all of those gags came at the cost of losing the story. Once the gremlins get loose all semblance of plot progression goes out the window (Along with a couple of gremlins). Dante’s insistence on packing nearly every frame of the movie with some type of gag begins to numb the senses after awhile. It’s as if he wanted to make a live action Tex Avery cartoon but he’s making a movie about little green monsters running amok. They’re two different things and after having gag after gag after gag slammed onto my head for 90 minutes I just wanted out. It felt like half of the movie was devoted to showcasing different types of gremlins and what they could do for a few seconds rather than insert some character/plot development into the movie and it suffers greatly because of that. 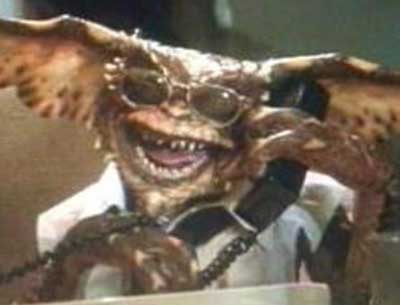 Think I’m kidding? We get the bat gremlin, spider gremlin, brainy gremlin, dentist gremlin, three gremlins named Lenny, George & Daffy (As in Daffy Duck & the protagonists from “Of Mice And Men”), an electric gremlin, a female gremlin (Complete with boobs & garish red lipstick), etc, etc, etc. Although some of the gags are funny (The bat gremlin flies through a wall leaving a “Batman” logo in it’s wake) after awhile they just aren’t. I got sick of seeing Rick Baker’s gremlin designs doing stupid things before too long but it never stops so if you want to take a break have your remote close at hand to hit pause. I saw it theatrically and their was no respite for me, I hadda sit through the whole thing. 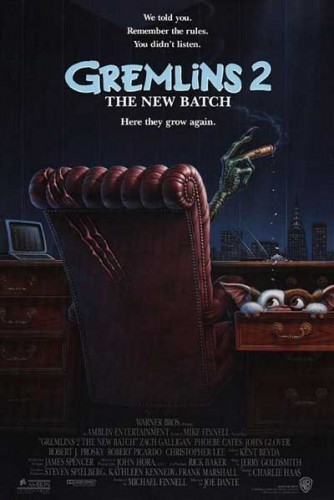 And it all ends so suddenly! As if Dante realized that he didn’t have an ending so he ad libbed one on the spot. I doubt that’s the case but it sure felt like it to me. The barrage of gremlins and the onslaught of cameos in the film just overwhelmed my senses in the end. Seriously acolytes, this movie has a TON of cameos in it. Try to catch them all…I dare ya! It all became too much for me to take in at the same time but I bet kids will love it to death. All in all “Gremlins 2: The New Batch” just didn’t do it for me and it didn’t click at the box office either, making $41 million against a $50 million dollar budget. Of course, that meant the end of the franchise but there are rumors of a reboot being planned in Hollywood so who knows? Nothing is ever really dead & buried in Hollywood (Jimmy Hoffa maybe…but nothing else).