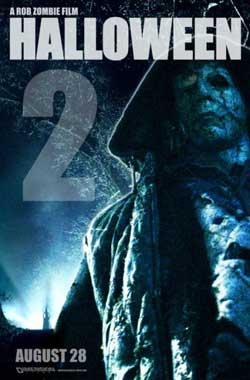 Laurie Strode struggles to come to terms with her brother Michael’s deadly return to Haddonfield, Illinois; meanwhile, Michael prepares for another reunion with his sister.

Remakes of horror movies tend to be popular throughout the themes of many new Hollywood productions. Classic horror movies are being remade with a bigger budget, and different opinions on how the characters should be played. With the tagline of “Family is Forever,” Rob Zombie’s remake of Halloween 2 crosses the line by not exactly remaking the movie, but completely reinventing his own idea of how the story of Michael Myers and his quest to find his sister should be portrayed. 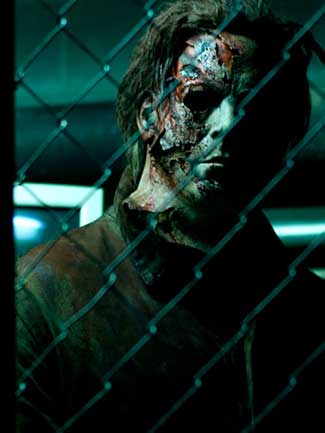 H2 begins with a scene 15 years ago; Mrs. Myers (Sheri Moon Zombie) is speaking with young Michael Myers (Chase Wright Vanek.) Young Michael is begging his mother to be set free, but Mrs. Myers tells him he can’t be set free. She gives him a small white horse toy (which has psychological symbolism that explained in a blurb at the very beginning of the film), and tells Michael that she will be with him in the form of the toy horse. Fast forward 15 years later, we see a blood-soaked Laurie Strode (Scout Taylor-Compton) walking through Haddonfield, holding a gun and sobbing. Sheriff Lee Brackett (Brad Dourif) picks Laurie up, and takes her to the hospital. She is shown being operated on; getting stitched up and in casts from breaks and bruises sustained from adult Michael Myers (Tyler Mane) in the first movie. The surgery scenes are very graphic, with up close and personal views of Laurie’s injuries. Another patient being treated is Dr. Samuel Loomis (Malcolm McDowell), and is shown being treated in a separate room. 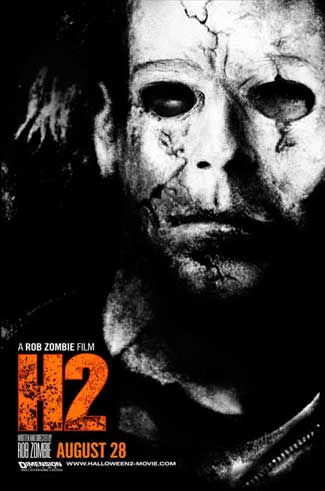 While Laurie is being treated in the hospital, the police are still on the scene outside the Myer’s home dealing with the gigantic body of Michael Myers. Taking off from where the last movie ended, Michael is supposedly dead with a gunshot wound to the forehead wearing the traditional costume of mask and coveralls. Six men are arranged to carry the body into the Coroner’s van, and are urged to strap him down by Chief Brackett. Of course, the two men in charge of the Coroner’s van are more engrossed in conversation about necrophilia intentions on one of the victim’s corpses that they do not notice that they are about to hit a cow. When the van hits the innocent animal crossing the road, the van’s front completely caves in smashing the driver and putting the passenger into a bloody state. Michael is unharmed as he exits the coroner’s van, and comes around to make his first kill of the movie by slicing the passenger’s head off and carrying around his prize for a few seconds to show to the apparition of his mother handling a white horse.

Laurie is shown out of surgery, and is in an increasingly restless state as she leaves her bed while still being hooked up by an IV and monitors. She walks down the hall and finds her other surviving injured friend Annie (Danielle Harris.) Annie’s face is stitched up from the cuts she received from Michael’s knife, and Nurse Daniels (Octavia Spencer) hassles Laurie to go back to her room. Michael finds his way into the hospital, in which he brutally stabs the nurse, and is emotionally vocal while doing so, grunting very loudly at each hit. Michael chases Laurie outside with an axe, where she tries to hide from him in a shack but it is no use. At this point Laurie wakes up, and we realized that the whole hospital incident is nothing but a dream in her troubled mind. 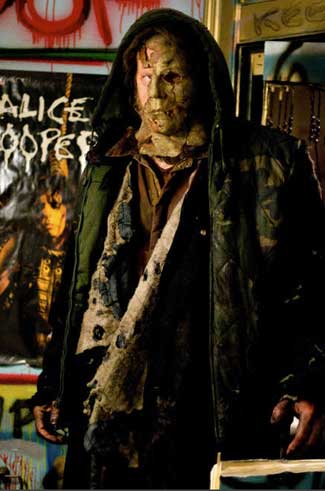 One year later on October 29th, Laurie is living in the Brackett residence outside of the neighborhood that used to be what they called home. Both Laurie and Annie are harboring deep scars on their face, and Sheriff Brackett is sure to keep Annie on close watch at all times. Laurie is also on medications, and suffers from nightmares that deter her from getting much sleep. Laurie is shown going to therapy, and having terrifying emotional breakthroughs that bring her to tears. Dr. Loomis is also shown a year later, adorned in a fashionable suit and makes fun of pictures of the old Loomis in his trademark tan trenchcoat. The money that Loomis has made off his book “The Devil Walks Among Us” makes everyone dislike Loomis’s character, as he is making a profit off of the publicity of the Michael Myers case. Loomis’s character is angry and psychotic as he is being hassled by questions about Michael repeatedly, and holds conventions and even appears on talk shows.

Finally, we see Michael Myers walking through a field adorned in a dark hooded jacket, and many other layers of clothing that is different from the traditional costume of coveralls and mask. His clothes are dirty, and he wanders the fields seeing visions of his dead mother in a white dress with flowing long blonde hair. Michael is also not wearing his traditional mask, and instead grisly with a beard poking out of his hood. His face is barely visible as he is approached by three rednecks in a truck, threatening to kill the bum walking their land. The two men club Michael, and congratulate each other when they believe Michael is down and out.

Of course Michael rises and puts on his mask to teach the men a lesson, vocally growling as he stabs them to death. He also kills the female passenger, and eats their pet dog in the cage.

October 30th approaches, and Laurie is still haunted by nightmares that awaken her in screaming fits. Dr. Loomis is shown milking his fame by being interviewed in front of the Myers home, while Michael finds his next victims at his mom’s old job at the Rabbit in Red. Michael is still wearing his mask with hooded jacket as he approaches one of the workers at the club. He kills him by stomping on his head, and hangs the dead body to display to the other workers. Michael also brutally kills the two others, in which he bashes one of the strippers head repeatedly into a mirror. She grabs at his mask, and his mask is easily torn away as half of his face is revealed. 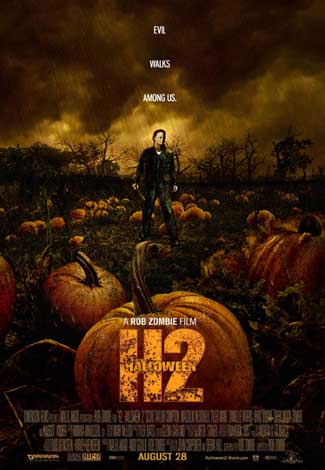 Of course, October 31st or Halloween officially approaches, and Laurie is shown happy at a petting zoo. Sheriff Brackett makes a call to Annie warning her to find Laurie before she finds out about Loomis’s book, but it’s too late when Laurie purchases “The Devil Walks Among Us” at a bookstore. The incredible revelation that she is Michael Myers’s sister Angel Myers disturbs her so much, that she decides she wants to just drink and party the night away to forget it is Halloween. Her two friends, Mya (Brea Grant) and Harley (Angela Trimbur), accompany her to the big Phantom Jam dressed as characters from the Rocky Horror Picture Show.Of course, Laurie drinks and sees things in her drunken state but she can’t hide from her brother as he finds her and their reunion is emotional for both Laurie and Michael.

In comparison to the original Halloween 2 that was released in 1981, there is not much that is very similar. Of course, the hospital set the stage for the original Halloween 2, but was a dream in Zombie’s remake. A big difference of the traditional Carpenter’s vision vs. Zombie’s Vision of Michael Myers was the vocalizations in the movie. There were of course remnants of the traditional heavy breathing, but also Michael would excessively get into his slashing with a loud growl or grunt. The audio of the stabbing also was a bit loud, as there was an overemphasis on each stab and splat noise on the bodies. Michael violently destroys all the bodies in the movie, making a little too sure that the victims are dead. There was brief nudity and an excessive utterance of profanities, but no sex scenes throughout the movie that is strange for a slasher film. 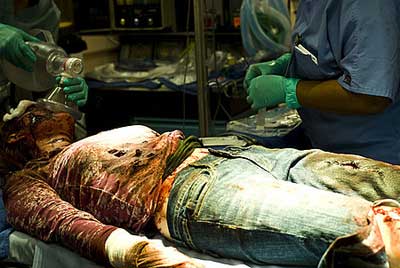 The traditional Carpenter music is completely axed from the film, except for the ending where we hear a small snippet of the music from the original movies. Haddonfield, IL is no longer portrayed as a wholesome town, but a place of graffiti adorned houses filled with teenagers fueled by anarchy. Loomis is portrayed differently than the original Carpenter film by being an asshole by using Michael Myers to gain financially, instead of helping the battle of defeating the monster. Laurie’s character is whiny and mentally disturbed, and sometimes is overbearing to the viewer when she cries out repetitively.

Rob Zombie’s blood-drenched reinvention of Halloween 2 stands up to the traditional remake by adding his own view of the story of Michael Myers. By giving Michael of motive to kill for an apparition of his mother, Zombie attempts to tie up any loose ends the viewer may have had from the classic films of the Halloween series.