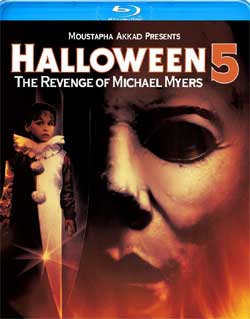 Presumed dead after a shoot-out with the Haddonfield police, Michael Myers (Don Shanks) is secretly nursed back to health — and returns a year later to kill again. He once more targets his young niece, Jamie (Danielle Harris), who’s recovering in the local children’s hospital after attacking her stepmother and losing her voice. Jamie’s mental link with her evil uncle may be the key to uprooting her family tree.

Get ready citizens of Haddonfield, Illinois, because you’re about to endure the revenge of Michael Myers! Borrowing ques from Halloween II, this chapter picks up exactly where its predecessor, Halloween 4: The Return of Michael Myers, left off. Halloween 5 slashed its way into theaters only after a one year hiatus, bringing many familiar faces with it. Dr. Loomis, portrayed by the late Donald Pleasence, returns alongside Ellie Cornelle(Rachel Carruthers), Danielle Harris(Jamie Lloyd), and Tina Williams(Wendy Kaplan). 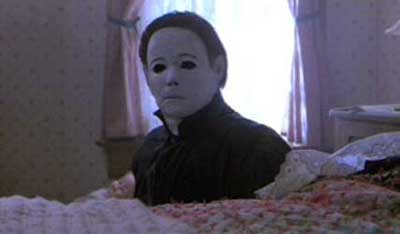 After the traumatizing events of Halloween 4, young Jamie Lloyd is now in a children’s clinic under the supervision of Dr. Loomis. It appears that the nightmare was too much for her 9 year-old mind to grapple, so she fell into a silent state. Michael, presumed dead after being blown up in a mine shaft, has been comatose for the last year while being nursed by a hermit on the edge of town. (Apparently the Haddonfield police department did not do a thorough search of the area.) To keep the Myers’ legacy alive and to crank out another sequel, Michael stirs on Halloween Eve, kills the hermit, and then sets out to find his niece. Only this time Jamie can sense what murderous shenanigans her uncle is up to. 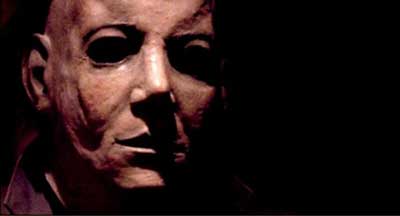 Jamie’s psychic connection with the killer gives the plot an interesting spin, and is not a complete rehash of the “good overcome with evil” take. Her step sister Rachel returns, however only briefly. For her character is tragically killed off by Myers within the first 20 minutes. Can you say BIG mistake? After the release the producers acknowledged their error by killing off Cornelle’s character. Hey, at least they admitted a fault. But it was nevertheless sad to see such a beloved character go. Now that Rachel has bought the farm, we follow her friends for the remainder of the time. The 80’s icon Tina, the ditz Samantha, and their boyfriends Michael(convenient, huh?) and Spitz. For the first time in a Halloween movie, the characters are all cardboard cutouts. Their only aspirations are getting drunk and having sex. But somehow it still seems to work. Probably because all of the other characters are transcended by the brilliant performances from Pleasence and Harris.

Furthering the story, Halloween 5 is also known for introducing a new card- the mysterious “Man In Black.” He has a Celtic symbol tattooed on his wrist, which is identical to the one Michael sports. (Previously unseen in the preceding films). Nobody, even the creators during production, knows his purpose. This character would be responsible for leaving the ending gaping open for a sequel. Many fault this subplot for ruining the next installment. But the “Man In Black” does not bother me, in fact I think he works to Halloween 5’s advantage. The movie has a mysterious tone to it anyway, and this just advances that.

In between the black coated figure stalking the sleepy streets of Haddonfield, Michael progressively pursues his young niece. She continues to feel his presence throughout the film, and with the help of a friend, Billy Hill, tries desperately to save Tina and others from falling victim to Myers. With most franchises, Halloween 5 tries to humanize its villain. I find it to be effective here, because we as the audience feel the family connection between Jamie and Michael. Family is forever after all. Although I am not too fond of Michael being unmasked. The final act has a showdown between Jamie, Michael, and Loomis in the house of evil that is sure to satisfy any hardcore Halloween fan. 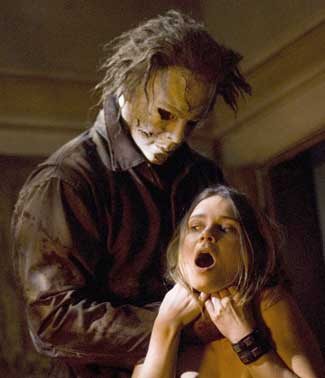 Now, let me enumerate the flaws of the film. Bottom line, it feels rushed. Going into preproduction directly after the release of Halloween 4, there was not much time to get the script perfected. And sadly it shows. The pacing is irregular at times, and some mistakes in continuity and editing are strikingly obvious. At times the words do not match up with the actors mouth even. Apart for the sparse Halloween decorations the movie doesn’t have much of a seasonal theme. Even though the film is set in October, the leaves are all green. But they were the same in the original, so I’m willing to overlook that. Overall though, this was a solid and grounded film.

There are noticeable errors in continuity linking this with the fourth entry. The big one being Myers’s mask, granted it does change from film to film. I actually favor the mask in this entry over the lackluster one in H4. Another drastic difference is the Myers’ house, which has been transformed from a humble two story house into a multiple story Gothic mansion with wrap around porches and towers. Again, a change I do not have a problem with. The sequence with Dr. Loomis exploring the mansion is a personal favorite of mine. And let’s not forget about that infamous laundry chute scene. Suspenseful. Claustrophobic. Without a doubt one of the more heart racing moments in the series. Could have all of that worked in the compact house from the original? More than likely not. 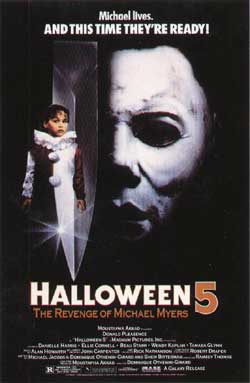 Halloween 5 separates itself from the franchise in terms of atmosphere and story. And you know what? It works. It works exceedingly well. Girard brings a European feel to make this film stand out from the rest. Not to mention the stimulating opening credits, with the brutal carving of a pumpkin with a butcher knife. By far the strongest credit sequence from the current nine films. Hazy lighting, Gothic houses, dropping shadows, and creaking barns brand Halloween 5 as a stylish and effective entry into this ongoing horror series.

Halloween V is now available on Bluray per Anchor Bay