SYNOPSIS:
“One hundred years ago, on April 21st, the wealthy leper Blake bought the vessel Elizabeth Dane and moved with his friend from a leper colony to California to build a town for them to live with more comfort. However, while crossing a fog in Spivey Point, they were misguided by a campfire onshore, steering the course of the vessel toward the light and crashing her against the rocks. On the present days, on the celebration of the centenary of the fishing town Antonio Bay, a glowing fog appears, bringing the zombies of Blake and his crew to kill the residents. Father Robert Malone (Hal HolbrooK) finds the hidden journal of his grandfather in the wall of his church, and discloses that Antonio Bay was built with Blake’s gold. Further, a group of conspirators including his grandfather lighted the fire to sink Elizabeth Dane and robber Blake’s fortune and now the ghosts of Blake and his crew are seeking for revenge on the locals.” (courtesy IMDB)

REVIEW:
Like so many of his contemporaries, it was the horror-filled pages of Forrest J. Ackerman’s Famous Monsters Of Filmland magazine which helped inspire the film aspirations of Kentucky-born John Carpenter. On leaving college he was accepted to the film course run by UCLA where he immersed himself in the study of film. For one of his projects he teamed with fellow student Dan O’Bannon and the two concocted the science fiction parody Dark Star (1974). Although Dark Star gained little success for John within America, he was lucky enough to raise enough money for a second feature, Assault On Precinct 13 (1976), an exciting exploitation thriller which successfully mixes Rio Bravo (1959) and Night Of The Living Dead (1968). 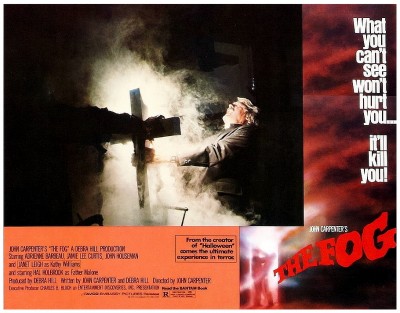 But with his next feature, John scored world-wide with Halloween (1978) which remains a powerful and often terrifying work, despite spawning a host of shoddy imitations. With Halloween to his credit, he turned his attention to the small screen with the high-rating television movies Someone Is Watching Me (1978) and Elvis The Movie (1979). It proved a happy time for John in more ways than one – he married his leading lady Adrienne Barbeau and began his long-time friendship with actor Kurt Russell.

For his next feature film, John turned to the pages of EC horror comics of the fifties, if only for inspiration. The Fog (1980) is a Gothic horror story about a mysterious mist which blankets a small coastal town, and from the fog emerges a band of ghosts intent on avenging their deaths one hundred years before. The film features the early effects work of Rob Bottin who also plays, under heavy makeup, the leader of the bloodthirsty apparitions. 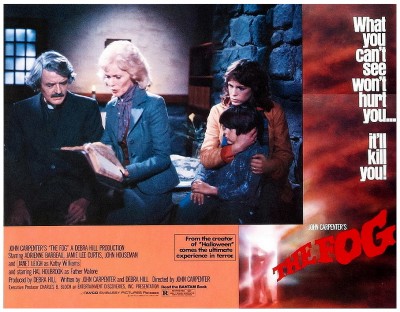 The first half is terrifically atmospheric, almost poetic at times, as John deftly juxtaposes several story-lines (which was one of the early Carpenter’s real skills) and presents several characters we care for, including hitchhiker Jamie Lee Curtis, truck driver Tom Atkins, and smooth-talking disc-jockey Adrienne Barbeau, who warns local listeners of the fog’s direction from her lighthouse radio station. The suspense builds to a high level, but the film quickly deteriorates into conventional horror fare.

Very consciously a ‘story’, The Fog reminds us of the tradition of story-telling from the very beginning, with John Houseman as the old sea-dog telling a ghostly yarn to frightened the kiddies. Then, in perhaps the best sequence in the film, uncanny events take place around the sleepy town at exactly midnight: Glass breaks, car horns blare, a petrol pump starts gushing, a series of beautifully choreographed incidents. But as the film moves on from eeriness and fog to the all-too-solid phantoms looking for victims, it collapses into purely conventional B-movie scares, and incidentally leaves a lot of loose plot ends hanging. You might have thought they could have fixed these problems in the remake, but no.

Instead of resisting the incredible influx of remakes, I now simply hope for the best and expect the worst. I think John Carpenter, coming to the end of an amazing career, feels much the same. He doesn’t seem to care much what Hollywood does with his old properties, and is often listed as an executive producer in name only. Case in point: The Fog (2005). Both original and remake suffer the same problems – the atmosphere gives way to the depressing realisation that you’re watching a simple ghost story about banal apparitions who hide in the fog. Selma Blair (the one vibrant actress in a cast of talentless screamers inhabiting the remake, takes on Adrienne Barbeau’s old role) but there’s a desperation to the entire project: We’re meant to feel unsettled by digital spooks, reckless trucks and rotting pirates who look every bit as terrifying as the Sea Captain in The Simpsons.

And it’s on that rather depressing note I’ll ask you to please join me next week when I discuss another schlocker from the locker for Horror News. Until then, good night and remember, as my old friend Bela Lugosi would say, “Bevare! Bevare of the big green dragon that sits on your doorstep – and the gifts it leaves on your lawn!” Toodles!