A group of teenagers go camping in the woods. They find themselves in deep trouble, when poop covered zombies that are controlled by parasites come out to attack them.

“Zombie Ass: Toilet of the Dead”, now there’s a name to invite you friends to watch with you! Though the first thing to note is the films direction under Tokyo gore magician Noboru Iguchi, that crazy inventive visual madman who directed “Dead Sushi, “Mutant Girls Squad” and “The Machine Girl” (just to name a few). 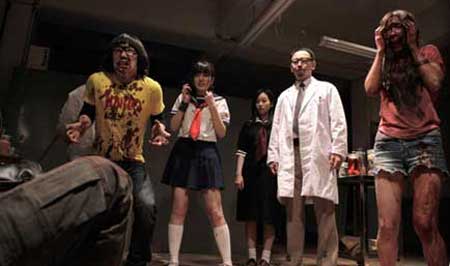 With “Zombie Ass” being his latest effort, you can expect lots of craziness in the way of high kicks, zombies, dark humor and flying body parts all wrapped under a crazy premise. This one being the correlation between the walking dead, shit and ass gags, and plenty of gory hi jinx. “Zombie Ass” is a 2011 Japanese horror comedy that is just making its way to the states after a festival premiere in 2011. As you can tell by its cover, the film is meant “not” be taken too seriously with a prime opportunity to inject plenty of fart gags and sexy ass shots for its viewer audience.

As the story goes, we follow a group of teens who have set out to the woods to do some bonding and trout fishing. Megumi (Arisa Nakamura) is the “sailor-moon” looking young teen who possesses a rather impressive set of martial arts skills (great of course for zombie ass kicking). She is marked as the survivor and level-headed one of the group early on, though also carrying the baggage of her sister Ai who killed herself after being subjected to constant bullying. 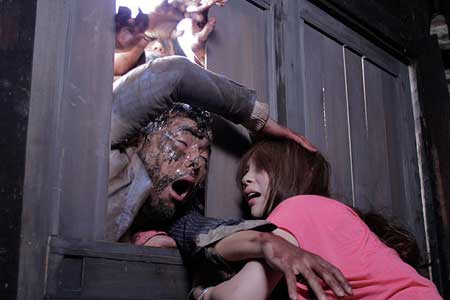 Maki (Asana Mamoru) is the older “team leader” (so to speak), who’s primary inclusion seems to be sex appeal and some compromising ass shots (Note: plenty of toilet humor and excessive demon-rooted farting). Take (Kentaro Kishi) appears to the be the older perverted one of the team who quickly has to deal with a rather “splitting” headache. 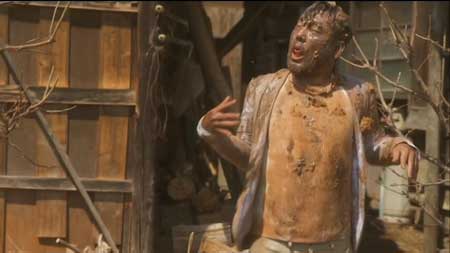 Things start much in the vein of “Night of the Living dead”, as a single wandering cretin makes his way to the group. As they flee the woods in fear of an attack, Maki begins to show signs of discomfort after taking down a much desired tape worm found within one of the trout (models desire tape worms to help them with weight loss). This tapeworm seems to be the focus of the film which makes its way into the digestive system turning several into walking ass zombies. 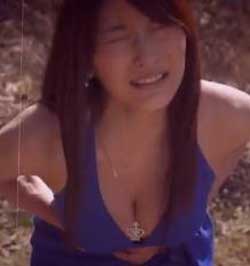 A quick run to the a local secluded outhouse springs forth a parade of fecal matter rooted zombies (yep, shit zombies) who emerge to eat and sling poop at passersbys. 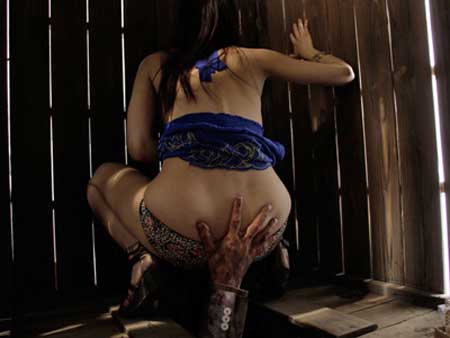 Dr. Tanaka (Kentaro Shimazu) who comes to the rescue has been up to his own dark secrets (such as keeping his daughter alive with these very same parasites). The tension builds as we are exposed to more past history during the course of ass shots and zombie invasions.

“Zombie Ass: Toilet of the Dead” tends to drag during the first act, but picks up later with some truly bizarre scenes One being the rapid showcasing of exploding heads suitable for any “Dawn of the Dead” film and the weird incarnation of parasitic creatures making their way thru bowel cavities. You’ve got to love the army of parasitic infected who approach their victims “ass backwards”. As with many of these style films, it all culminates into more metamorphosis, flying hi jinx and gory battles that culminate in a stand-off and lots of parasitic worm shots invading body cavities. I found this one to be geared towards to a more erotic portrayal of invasion with these parasites lunging into open mouths, anuses and even the occasional crotch entry scene (prolonged for maximum eroticism). Megumi is seen in the last act with her shirt torn half open exposing her left breast while trying to battle her opponent in a sky battle. With the added “school girl uniform” attire worn throughout the film, it’s clear that the filmmakers were trying to up the sex appeal factor this round. 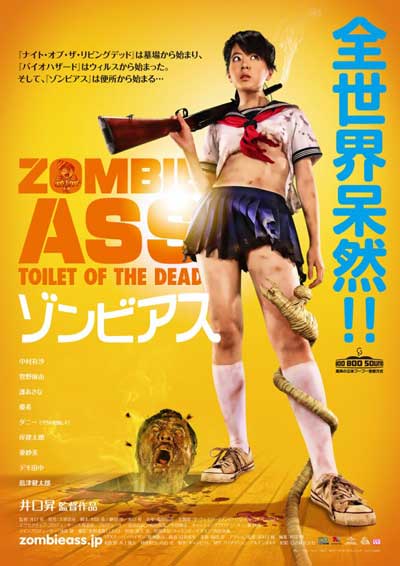 Zombie Ass: Toilet of the Dead