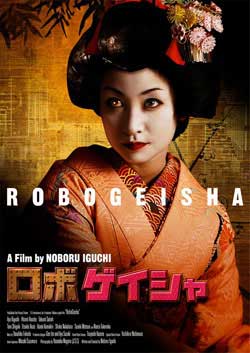 Fresh off the absurdly Asian-but slick wagon arrives this beast of a film titled “Robogeisha”. If you’ve had the pleasure of the checking out the trailer on this one in advance you know it’s one crazy ass wild ride of movie. Then again this crazy ass trend is a trend that doesn’t see to be slowing. I can tell you straight off the cuff that I’ve looked forward to seeing this one almost as much as I waited for “Vampire Girl VS. Frankenstein Girl”. The films was directed by the prolific Noboru Iguchi who also graced use with “Machine Girl”. Same stuff different day…you say?? Well that depends on your point of view. These films of this nature are created under a hyper kinetic camera style that accents the industrial aspects of mixing machinery with human beings. 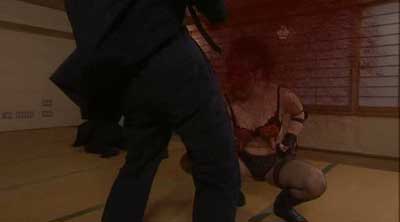 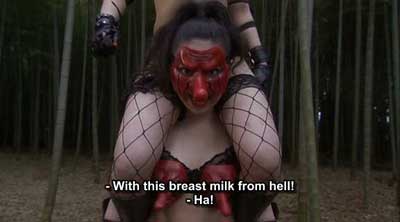 Phallic in nature, our first assassins come running out of a Robot geisha equipped with lethal penis shaped face masks and bra attachments. These prove to be more than just eye candy as they use them to gut the corporate business men and cave in their faces. Cool eh?

Hey if your fan of this style then this one will make a needed addition to your crazy Asian films shelf. It’s comedy, horror, gore, extreme motion and action in the bizarre sense. I think what gets me the most is the anticipation of the inventiveness that transpires in the creators and FX wizards on these films. Which is a great lead in to the other top talent on board Yoshihiro Nishimura . Yoshihiro Nishimura provided fx duration on “Vampire Girl vs. Frankenstein Girl”, “Samurai Princess”, “Stop the Bitch Campaign”, “Hard Revenge Milly” and “Tokyo Gore Police”. That’s not all but it’s enough to make the connections.

The style starts with full action, full throttle and doesn’t let up. What makes it unique is that the characters of the film come out swinging like cartoon characters in a sick and twisted nightmare for the criminally insane. Robogeisha is our charter of choice….what does she offer? How about a mouth saw blade, ass shooting ninja stars or may be a break away body that transports villains of choice. If they wear in space it would easily fall into scific fantasy but these cretins are assassins with a purpose. 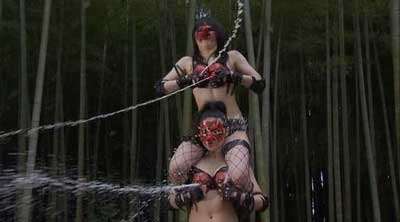 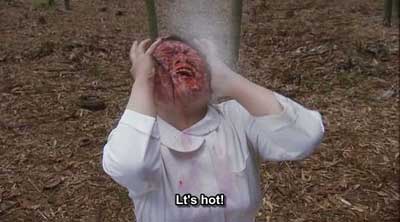 So getting on with the premise….. 2 sisters Yoshie & Kikue Kasuga are typical of any sisters…they fight. Though the older sister a Geisha takes every chance she can get to abuse her younger sister by humiliating her. A syble jealousy over beauty, grace and Geisha-hood drive the 2 into the arms of a local corporation run by wealthy thugs who use robotics and technical industrial amendments to create killer robot Geishas. There guards are called Tengus who sport weird face and breast costumes in addition to there lethal attacks. The corporation complete with its ego driven management is intent on ruling the world and using its Robot creations to assassinate all competition. 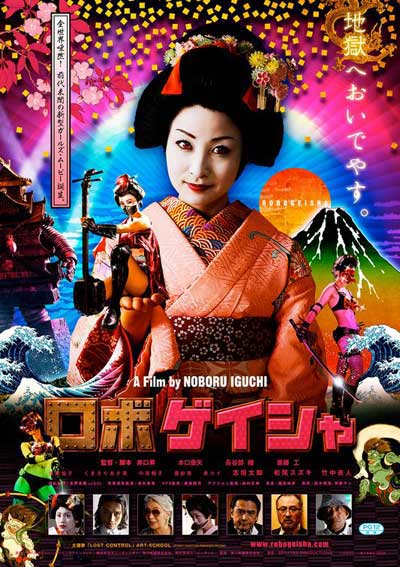 The Kasuga sisters are brought into the Geisha tribe to be trained in the art of assassins and deadly weaponry. They just didn’t anticipate it would be added on to their bodies as lethal weapons. Quickly they rise to the top of the class and at the same time face conflicts of rivalry in there transformations. As the film progresses so does the sisters need for more robotics until they are entirely transformed into machine based hybrids. Though as they take out several opponents your in for a few surprise typical of Asian horror comedic extremities. 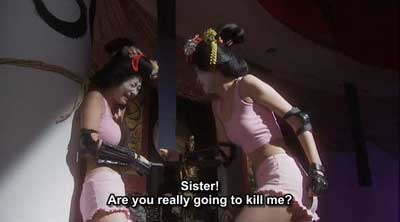 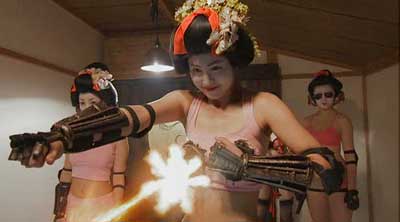 The film drags a bit in the middle portion as they get caught up in the relationship drama but it still packs a wallop of good screen time with lots of blood, guts and body parts flying. You’ll love the special effects which include armpit swords, ass darts, and machine gun bras……Jump on board the Asian extreme wagon and let your imagination soar!