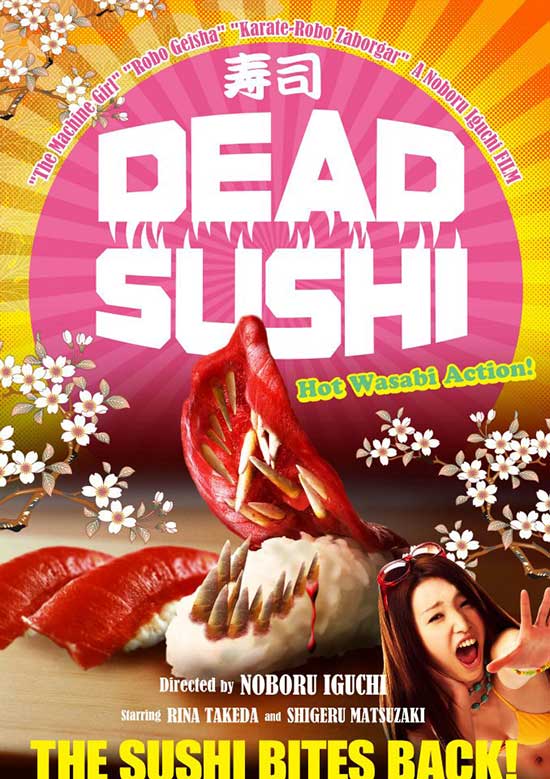 Keiko, the daughter of a legendary sushi chef, runs away from home when his Karate-style regimen becomes too severe. Finding work at a rural hot springs inn, she is ridiculed by the eccentric staff and guests.

Good comedy is as hard to pinpoint as good horror, and both are terribly subjective. What terrifies one person can send another into belly laughs, and vice versa. There are very few horror-comedies that have really nailed their subject with real wit and effective scares—while demonstrating a genuine affection for the genre–but sadly, they often get lost in the dearth of bad jokes that populate your Netflix Instant selection. Movies like Poultrygeist, Vampires Suck, or Witchin’ and Bitchin’ perform their comedy in bad Halloween costumes with even less class than the Scary Movie series, forfeiting any chance of lasting impact to instead stuff as many tasteless jokes as possible into 90 minutes. If they had only tried, just put in the tiniest smidge of thought or sincerity, imagine the possibilities. 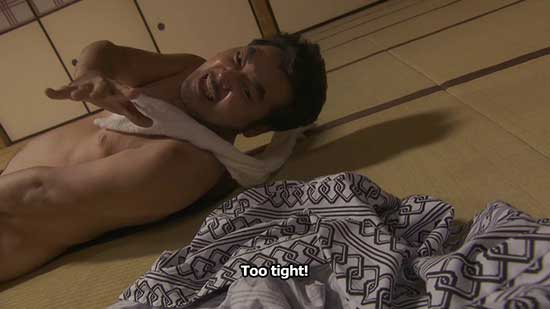 Dead Sushi opens with a mesmerizing sequence explaining the delicate art of preparing sushi. Keiko, the daughter of a renowned sushi chef, is in awe of the practice and hopes to be a chef herself one day. Her father is cold and often reminds her that her gender makes the chances of ever achieving her dreams pretty slim. Still, he teaches her the art of sushi through martial arts, likening both to the capabilities of one’s hands. Despite her efforts, Keiko still feels unworthy of her father’s approval, and runs away to work in a mountain inn known for their sushi. She tries to keep her head down and properly answer guests’ demands, but her clumsiness and crippling self-consciousness knock her back every time. The only kindness she finds comes from the inn’s groundskeeper, Mr. Sawada, a sweet man who almost instantly recognizes her true skills and encourages her to pursue them.

One day, the head of a pharmaceutical company and his entourage arrive at the inn for some pampering and the establishment’s famous sushi, demanding the full VIP treatment. They entertain themselves by drinking sake and groping the waitresses while the master chef prepares their meal. They marvel at the chef’s (pedestrian) technique and demonstrate the (incorrect) etiquette for each dish. Keiko, the secret sushi protege, looks on in horror, shocked that these so-called foodies could be so ignorant. 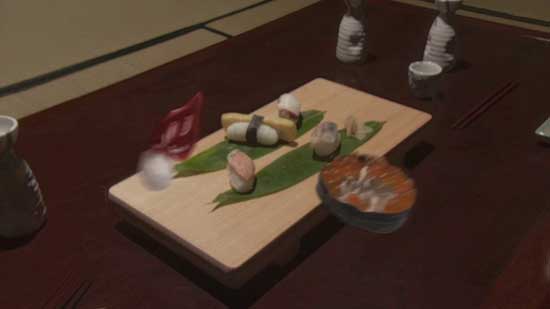 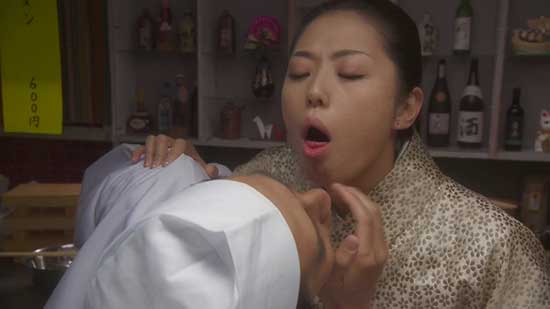 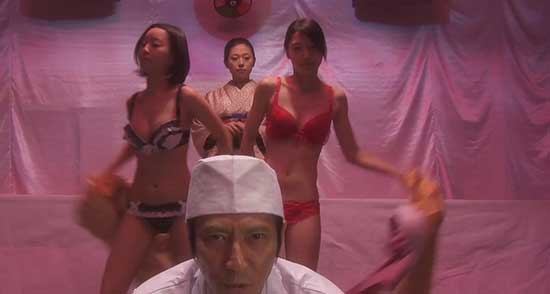 When she can stand it no longer, she bursts out in an outraged monologue correcting them on every point, brilliantly ending her tirade with a real crusher: “You fake gourmets!”
This naturally escalates to a knife fight/martial arts showdown between Keiko and a room full of bruised egos. Unbeknownst to anyone is the shaggy vagrant who has been following the entourage mumbling something about revenge, and interrupts this brawl by screaming threats and dropping dead right there in the room. He is later revealed to be Yamada, a former developer for the company and had a big hand in creating a Re-Animator serum that predictably went horribly wrong. Until that revelation, Yamada is simply an angry hobo with a pocket full of hypodermic needles and dead squids.

In a baffling series of events, Yamada unleashes a virus upon all the raw fish in the building, which not only brings dead tissue back to twitching, angry life, but also equips it with teeth and a nasty sense of humor. The evil sushi wreak havoc on the hotel–everything from devouring people’s tongues, to flying in a swarm like so many fishy bees, to turning the already questionable practice of “body sushi” into a sexy bloodbath. It is up to Keiko and Mr. Sawada to stop the madness with martial arts and sushi knowledge, and just a little help from a good-hearted egg sushi that spits acid.

TL;DR: sushi come to life and eat people—also, kung fu and titties. Just try to picture that and whatever you’re imagining, you’re right. But you’re also so wrong. 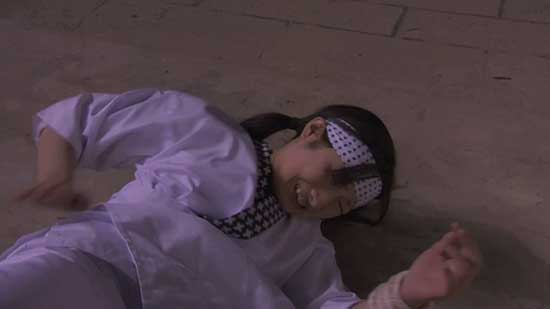 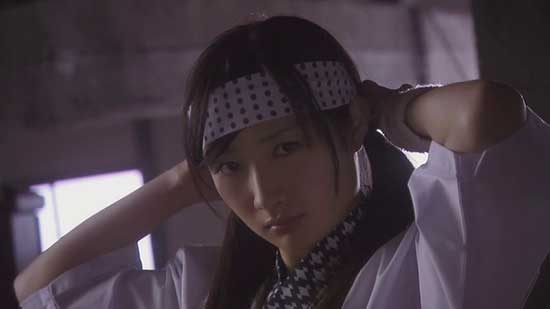 With that absurd premise, it’s easy to assume that Dead Sushi is nothing more than a painfully silly gore comedy with the flimsiest logic holding it together. And yes, this movie looks as dumb as it sounds. The special effects are laughably cheap—the CGI is as bad as Birdemic while the practical effects look like Evil Dead on an even smaller budget. The acting is over the top and the dialogue is often baffling. There are many shots that are set up specifically to see boobies and consequently belittle them (in fact, this movie makes so many jokes at the expense of women, it gives the impression that women are considered a joke in and of themselves). The plot loses itself more than once and takes huge leaps in its own ridiculous logic that become easier to accept when you just give up. At some point, a character screams, “Things are reaching a point where they no longer make sense!” so at least we know the writers are in on it.

Just about the only thing this movie takes seriously is sushi preparation, likening the practice to a holy art and chefs to warriors in tune with the universe. These moments take a breather from the wackiness to praise sushi for the intricate delicacy that it is and its special place in gourmet dining. These moments also involve a fatherly affection that is effectively heartfelt and very sweet. This profound respect for sushi along with genuine human emotion somehow provides a lovely counterbalance to sashimi with toothpick teeth eating people alive and reanimated squids flying through the air. 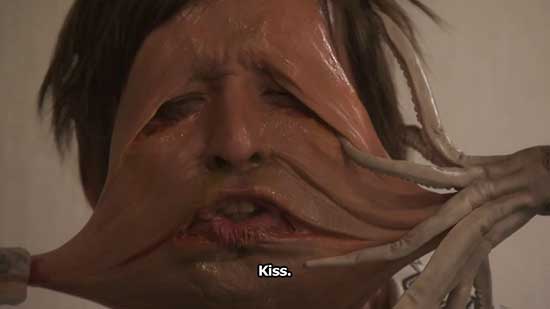 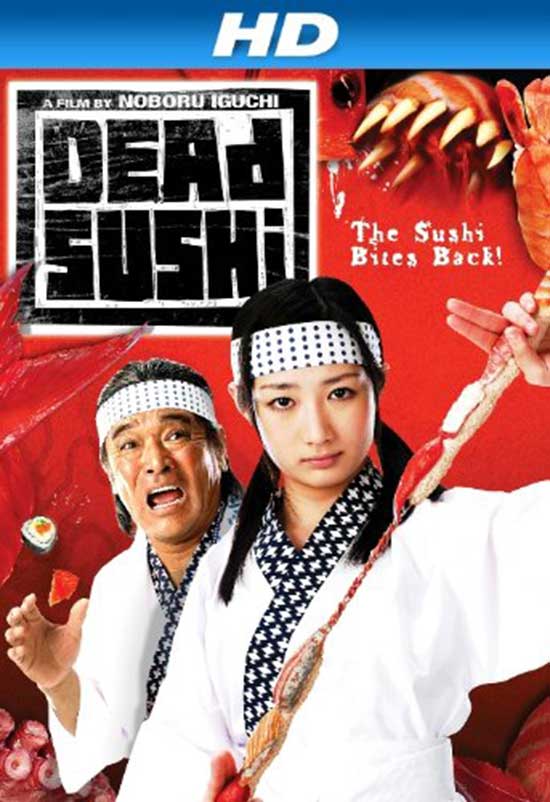 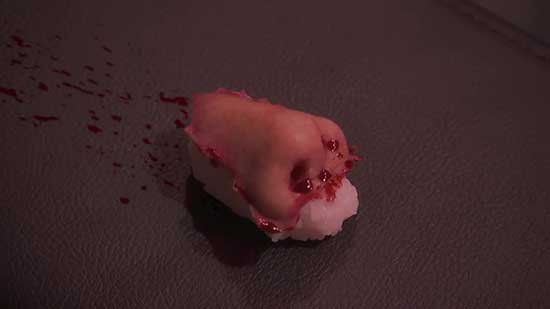 Dead Sushi succeeds in the way of Piranha 3D—gleefully absurd, excessively gory and exploitative, and willing to push its silliness to the absolute extreme, but under all that sleaze hides a beating heart full of love for its own creation. That sincerity sets it apart from your horror spoofs that are merely hollow cash in with a splashy title. You can see the fun these actors are having, and feel the joy that came out of making these ridiculous ideas come to life. That joy makes the image of two sushi doing it doggy style a lot easier to swallow.