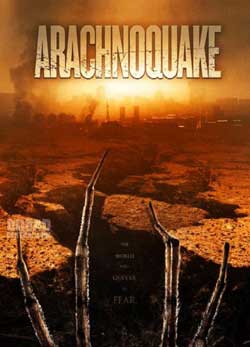 An earthquake triggers a giant spider attack on the city of New Orleans.

A huge earthquake in New Orleans causes huge craters all over the city that, being a SyFy Saturday premiere, means those craters ain’t empty, folks. Out of those big holes (insert dirty joke here) crawls more oversized albino spiders than there are topless drunk chicks with necks full of beads trying to stumble home from Mardi Gras. Okay, to be honest, varying sizes…some are softball sized, some are medicine ball sized, some are CAMEL SPIDERS sized, and the pink & white queen is a ginormous beauty that can dogpaddle across the top of the water chasing after boats and people faster than Willie’s airboat when he’s hot on the trail of a big gator on SWAMP PEOPLE. 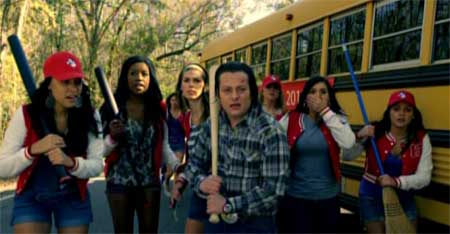 Sounds like the City of Love is in deep sh*t, huh? Not when the savior of the future himself, John Connor, is leading the way with Carol Seaver and BENSON’s buddy Pete Downey along for the ride to pave the way and save the day. Gonna be a sh*tload of spider soup to be served up for the next Fat Tuesday special!!!

Bless you, SyFy Channel. When I want giant creature features, you almost always know just how to rub me the right way. Granted, some are strike outs BUT, I’d say that around 60% of the time, you get it right every time. And while ARACHNOQUAKE isn’t a home run by any means, so don’t start gloating yet, it’s definitely a solid double. Especially after you tried shoving the horrible misfire known as BIGFOOT down my throat a few weeks ago…blech, still trying to wash that stench out of my eye sockets.

Why am I so happy though? Simple…when I am watching movies filled with humongous sharks, squids, octopussies (you’re welcome, Bond fans), piranhas, piranhacondas, crocs or gators, even most giant snakes, (hell, I like snakes anyway) I could give a sh*t less – I’ll sit back and watch the glorious schlock with drink in hand and cheesy smirk on my face because it don’t bother me a bit. I’m in Kansas and most of those things can’t touch me from the salt water no matter what they do HA! 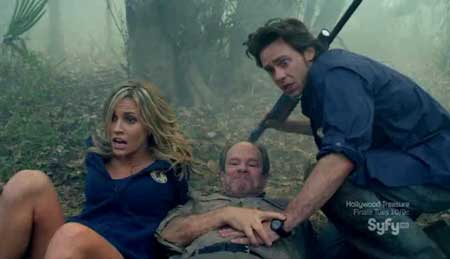 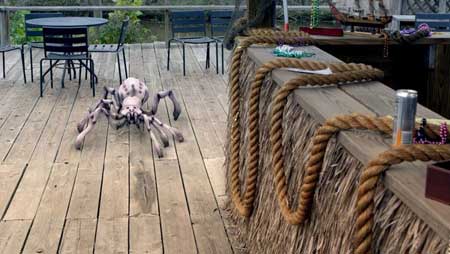 But here in Kansas, we also happen to have spiders the size of my thumbnail or even smaller that if they bite you just right can eat away a mound of flesh the size of my fist or even bigger. Not something I like to think about while camping in the woods, or even sitting on my back porch smoking, for that matter. I can kick a psycho’s ass or even more fun, shoot holes through him. A poisonous spider bites me and I’m liable to scream like a little girl all the way to the hospital. So you can only imagine that if I’m not a fan of the little guys then yes, giant spiders FREAK ME THE FUCK OUT!!! In a good way though…don’t think I don’t enjoy a little cringing with my Rum & Schlock, because I most certainly do! 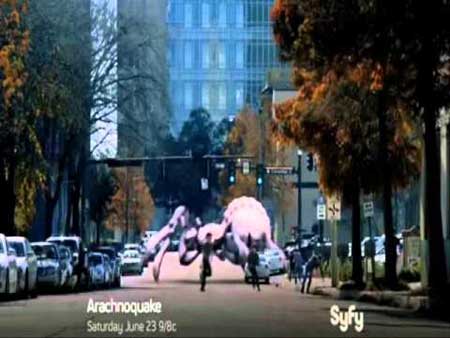 Now don’t go thinking that just because I didn’t go all fanboy gushing over this flick like I did with MEGA PIRANHA or SHARKTOPUS that I didn’t thoroughly enjoy myself, because I did. With my love/hate, mostly hate, relationship with spiders the ICK factor was certainly here for me and for that, I’m happy. Furlong & Gold, I wish that they’d had more to do though given the large amount of screen time that they actually had. Phillips chewed up almost every scene he was in perfectly though, which more than made up for it. The brother/sister relationship admittedly raised The People’s Eyebrow just a tad as they were more like star-crossed, worshipping lovers. Or maybe that was just wishful thinking on my part? Hmmm…nope, they definitely gave off the “STEP” sibling vibe, if you catch my drift. Nothing wrong with that, and don’t you judge me. 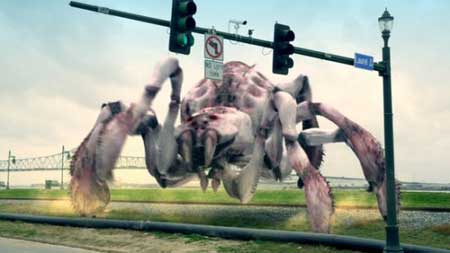 Anyway, I’d also like to thank the filmmakers for their tribute scene and most hilarious nod to Samuel L. Jackson in DEEP BLUE SEA…that did NOT go unnoticed, and I totally loved it AND laughed my ass off over several replays of the scene. The easiest way I can sway you into my way of thinking with this movie is if you didn’t enjoy the SyFy Original, CAMEL SPIDERS, from last year then you’re not going to go for this one either. But if you did…if you DID, enjoy the hell out of it like me, then by all means follow me, children, into the web, and get your very own copy of ARACHNOQUAKE just like I will…