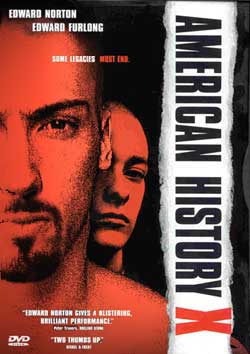 A California neo-Nazi (Oscar-nominee Edward Norton) gets sent to prison for murder and comes out a changed man. But can Norton atone for his sins and prevent his younger brother (Edward Furlong) from following in his hate-filled footsteps? With searing performances and gut-wrenching realism, American History X offers a compelling and anguishing look at racism, family and forgiveness.

Hell-o, everyone. Although not based on a true story. This Cult Classic is one of those films that very damn well could be. One of those films like Scarface, where it’s not necessarily based on actual events, but it’s a sequence of actual events that happen everyday, somewhere in in your own neighborhood, in your town or especially in your Country. It’s a problem in America today. Racial induced violence. This is one of th best portrayals of the hate crimes and their consequences which is happening somewhere as you are reading this. It happening now, in America. This film is a wake up call and brutal lesson to be taught to America about their own country… American History X.

This film, as mentioned above is a lesson to be learned. Not only is it an important message, but an awesome film all the same. The way it is shot and angles used are nicely executed. The changing of black and white to color (to separate the present from the past) is nicely done as well.

The brutally realistic portrayal of the the lifestyle is awesome as well. It is an up close invitation to tag along with these ruthless havoc inducing hood mafia of skinheads as they terrorize the town and in a sense, take it over. David McKenna claims that he had a hard time selling the script because everyone was afraid of the material. I’m glad someone had the balls to take it on. One of the Executive Producers for the film submitted the script to New Line Cinema (of the A Nightmare on Elm Street fame, and practically built from) and they turned it down twice. Finally, after New Line purchased McKenna’s second script, Jell-o Shots, they purchased American History X as well.

This did cause some problems, even somewhat behind the scenes. The production company first sought after Dennis Hopper (Director of Colors) about directing the film. He passed on the project and they hired Tony Kaye. Mario Van Peebles (New Jack City) and Rusty Cundieff (Director of Tales From the Hood) both complained that the film showed a one sided racial conflict. It was also rumored that some of the Actors were feeling quite unsettled during the making of the film.

Actor Ethan Suplee was said to have got harassed while in a store for not removing the fake tattoo that read White Power on his lip. Angry African American s thought the tattoo was real. He did not stick around to explain his appearance, he just got the hell out of there.

After filming, word has it that Edward Norton and Tony Kaye battled for the rights of the film. Edward supposedly had a part in writing the script and was asked to be the Editor as well. Walls were said to be punched and blood drawn during the cutting of the film. At a test screening for the Edward Norton cut film, a huge response made Kaye threatened to take his name off of the film altogether.

At one point, Kaye became enraged while watching the scoring sequence that he hurled an orange and his wallet at the video monitor before getting up and walking out of the scoring session. He had nothing done when the deadline approached and New Line threatened to release the film the next month with or without his approval. It was submitted to the Toronto Film Festival and Kaye responded by flying to the festival and personally asking them to remove it from the screening bill. New Line pulled the film from the competition.

in my opinion, the trials and tribulations should have all been worth the struggle. The final product is an important statement and a masterpiece in American cinema. To me, it would be one to be most proud of. A major accomplishment. Not only does it have a powerful message, but is a well written, shot, acted and displayed package of American truth. It almost even has a documentary feel to it at times.

American History X was Tony Kaye’s first film as a Director. Edward Furlong ( Brainscan, Terminator 2) does an excellent job portraying Danny Vinyard, a skinhead in training that looks up to his older brother’s past (and blindly overlooks his present). Derek,played by Edward Norton (Primal Fear) is the older brother with a dark past.

Edward plays Derek (the recovering skinhead) brilliantly as he was also nominated for a well deserved Academy Award for his roll of Derek Vinyard. Beverly D’ Angelo does a swell job as a sick mother with a smoking habit. There is one particular scene that makes many shriek and it’s f*cking awesome. I will not ruin it for you. There is also awesome squib action in a few violent shooting deaths. One shooting specifically is probably the most brutal cinematic shooting deaths that I’ve seen.

The Special Features for the first DVD run include deleted scenes, the original theatrical trailer, Cast and Crew biographies and Filmographies. This relentless street brutal film is all around awesome, from the beginning to the down noted end. Of the small batch of non-Horror that I can stand to watch, I highly recommend it for anyone who wants to view a film that makes you think. For some, it may even make you think twice. I give this film, American History X, FOUR HORNS UP.