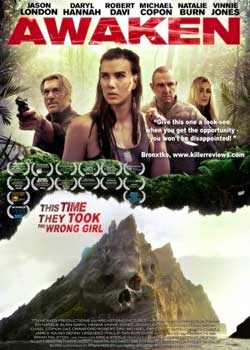 A random group of people wake up on an Island where they are being hunted down in a sinister plot to harvest their organs.

1924’s The Hounds of Zaroff by Richard Connell is a story perhaps best known as The Most Dangerous Game. It’s the simple tale of a simple aristocrat with a simple desire: to hunt down and kill people on his isolated island in the Caribbean. It is I’m sure we can all agree, the true American dream. The novel has been the basis for numerous adaptations including Bloodlust! (Evil doctor hunts lovers), Hard Target (Cajun Wilfred Brimley backs up Jean-Claude Van Damme) and, of course, The Most Dangerous Game, which was made in between takes of King Kong.

And whilst it might not to allude to it, Awaken, directed and co-written by Mark Atkins (Road Wars), has to be at least partly inspired by the novella. Natalie Burn (The Expendables 3) plays Billie, a kick boxer with a background in the Special Forces and tempered by the desire to find her missing sister. Before her investigation can get truly get under away, she’s kidnapped and dumped onto an island with several other people. Oh, these things that come to test us! 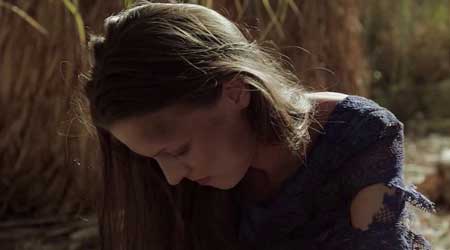 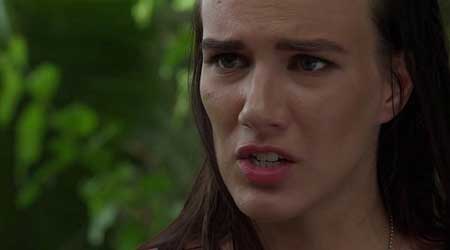 But wait, there’s more! Billie and her fellow island dwellers are being hunted by a black market company specializing in organ trafficking. For some reason, their clients like to have their organs to come from people with some fight in them. Presumably, because of something to do with science.

One of Atkins’ previous films was the World War 2 fantasy film, P-51 Dragon Fighter. Unfortunately, Awaken is just not as fun as large dragons flying around South Africa with Swastikas tattooed on their scaly wings. Whilst we get to meet the whole organization that rips out the old liver and offal, we never really get too much of an insight into the mentality of the kind of person who would have enough money to pay for overpriced black market goods. With the possible exception of Mao, played by Daryl Hannah. Yes, that Daryl Hannah. Mao turns up halfway through the proceedings to request organs for adorably cute, adorably dying daughter. She drinks, she curses and then when things heat up, she leaves. As cameos go, it’s hardly Judi Dench in Shakespeare in Love.

Staying on the subject of cameos, Edward Furlong crops up as a sleazy inhabitant of the island. In fact, Furlong is part of one of the bigger mysteries of Awaken. Where exactly does he go after the halfway mark? It’s the darndest thing. One minute he’s pumping up the innuendo whilst eye-f*cking Billie, the next he’s ghost like Swayze. Perhaps he finally finished off reading the script, threw it over a rainbow and took the next shuttle bus home. Finally there’s Vinnie Jones who, after nearly 20 years in the business, has finally perfected the art of playing Vinnie Jones. Well done, Vinnie! 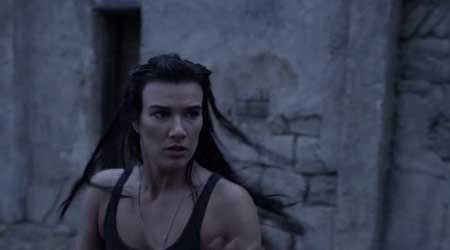 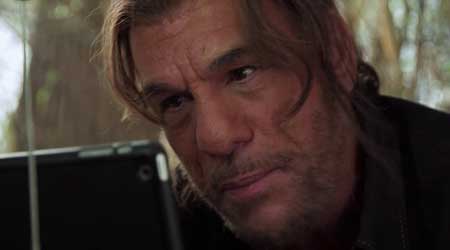 Once Billie works out what’s happening with regards to all the fighting and shooting, she rallies the troops to storm the company’s main office in an ‘explosive’ finale of fighting and shooting. At which point it becomes hard trying to not storm out of the film. Whilst the action is fact and furious, it’s hard to keep up with what’s going on. Not because of any last minute Machiavellian plotting. More because there’s no sense of space. Everyone could be waving their guns in any direction, in any locale. And it goes on. And on. And on. 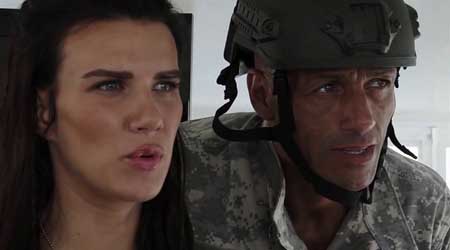 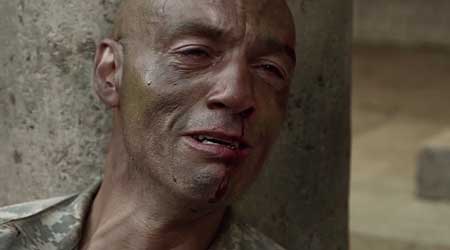 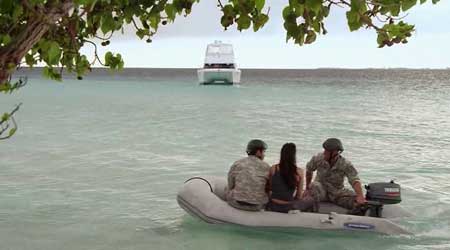 It has to be given to Awaken though, it’s great to see a female action hero being put front and center of a film. Burn comes across as an utter bad ass. Unfortunately, aside from kicking people in the head, she’s given very little else to do. A shame when you consider she also co-wrote the script! It’s great to see more kick ass women kicking ass on the big screen. Let’s just hope that everyone irons out those creases to give us something a bit more special if they should all reconvene.