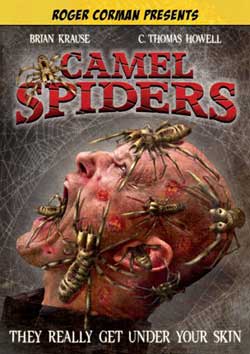 Based on actual creatures that for years have tormented our armed forces in the Middle East, these creatures have now invaded the southwestern deserts of the United States. The Camel Spiders now freely hunt for prey, unafraid of any predator – including man. No place is safe no one is beyond their paralyzing sting. In the end, a small band of hearty fighters are forced to make one last stand against the creatures

In this SyFy Channel premiere (GIGGITY), American soldiers doing their duty in the Middle East are in the midst of a firefight when all of a sudden screaming ensues and the enemy stops firing on them. They investigate and find one lone dead enemy body covered in puss-covered bites. A local doctor informs the Captain that it was the work of the Bish Bish, or “Devils of the Sand” – very large, venomous spiders that can reproduce in a matter of days. Faster than you can say “EIGHT-LEGGED FREAKS”, some baby spiders make their way into the mouth of a dead American soldier just before he’s crated up to be brought home for burial.

Once back in the States, the truck carrying said dead American soldier winds up the victim of a high speed police chase and BAM, the crate is knocked out of the truck and the vicious lil buggers are set loose in our very own Mojave Desert to wreak havoc and it’s up to Leo from CHARMED to save the day, sans magic. Can he do it?? Break out the Nachos & Rum, and hold on tight!! And try not to get any cheese on you. From the movie, that is. I ain’t sharing my Nachos & Rum…

Yep, I’ve seen the pictures online for years and marveled at how our brave men and women serving overseas in the Armed Forces over there in that big-assed desert not only have to endure all the dangers that come with the situations over there, but on top of that they have to contend with venomous spiders bigger than Dennis Miller’s ego. Okay, maybe not that big. I’ve also thought for years how cool it would be to write a movie based on those vicious lil “camel spiders”, especially if they were let loose in one of our very own deserts here in the good old U.S. of A. Well, thanks to Roger Corman and the SyFy Channel, I suppose I didn’t move fast enough on my own idea and for now I’m fine with that. As funny as I love to think I am, my own writing will probably never match the cheese factor as seen on your TV during any given SyFy premiere and you know, I’m fine with that too! 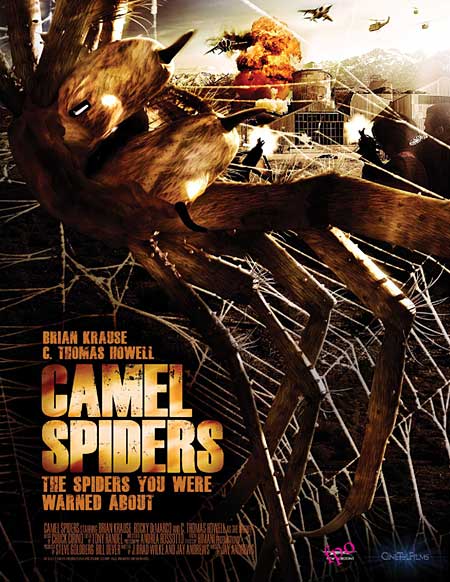 It never seems to fail when I review one of these SyFy things – there is no grey area (not even charcoal), only black or white. I love it or I hate it, plain and simple. And whether I trash or praise one of these flicks after watching it, they always seem to be some of my longest reviews, sober or not. I’m trying to contain my giddiness this time, but tis very tough when I fall in love with schlocky cheese of this magnitude. Maybe I’ve become the current and reigning King of Schlock for Horrornews? Meh, screw the “maybe”, you may bow down to my Schlockiness or be vanquished.

If you enjoy and/or get a huge charge out of watching typical B-Movie clichés run rampant; if you enjoy seemingly intelligent characters doing very stupid things just to pad a little time and/or move the plot along; if, like myself, my kids, my Muse, and my little nationwide circle of SyFy Saturday enthusiasts, you enjoyed such awesome cheesiness as MEGA PIRANHA, SHARKTOPUS, or MEGA PYTHON vs. GATOROID, then CAMEL SPIDERS is for you, my fiends. If you missed the premiere back in December, no worries – the DVD & Blu-Ray hits streets and online retailers everywhere on March 27th, 2012. B-Movie Creature Feature & Fans of Schlock – DO NOT MISS THIS!!!!