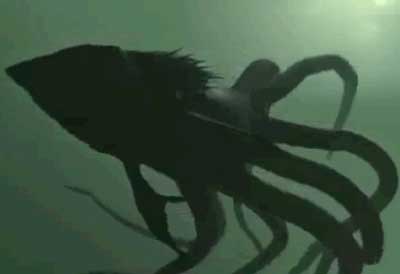 The sharktopus is tough, but fair. Actually, it’s not fair at all, it’s absolutely merciless and it will just f*ck you up! It is also sophisticated, a gourmand and a member of MENSA Elite!!!It is a creature so evil that it was cast from the pits of hell and sent to kill all those who enter the sea.

In yet another SyFy Channel original movie, Eric Flippin’ Roberts is a sarcastically brash and assholish research scientist who has developed a super-secret G-14 Classified weapon for the Navy – a hybrid cross between a shark and an octopus – you know, SHARKTOPUS!!!  The creature is meant, of course, to protect us and our oceans and is controlled, of course, by electrical implants and a handy dandy thingamajiggy around its neck.  All is well, right?

Well, what do you imagine would happen if something went wrong with the thingamajiggy?  Like if it went haywire and maybe fell off?  I imagine that maybe if something like that happened that our good buddy SHARKTOPUS (yeah, I love typing it almost as much as I love saying it) might decide he’s had more than enough of being under someone’s control and going against his natural instincts by having to save folks instead of gobbling them up, and maybe he just might go on a full-blown rampage at a Mexico beach resort. If you watched its premiere on SyFy last Saturday then you know I’m right, and thank the Gods of Awesomely Cheesy Flicks that I AM right!!!

Sadly, neither my daughter nor myself were actually home last Saturday night for our usual SyFy Saturday Premiere ritualistic viewing – she was skating with friends out of town, and I had to work.  Lucky for me I’m a bartender in a small town though, so I can easily snag control of the remote, get the channel I want, then hide the damn thing so none of the other drunks in the bar (besides me) can screw up my Saturday night with something as trivial as college football.

I feel badly for my daughter though, as not only is she still pissed at me that I got to see it and she didn’t, but she’s also such a huge fan of both MEGA SHARK vs. GIANT OCTOPUS and MEGA PIRAHNA, this one would have been right up her dark and twisted alley.  Hell, I think even my son (who really avoids horror movies whenever he can) would have gotten a kick out of this one.  Thankfully for all of us, there’s the Thursday night replay…

But back to the meat, so to speak, of the matter – so many great kills, so much bad CGI, so much over and under-acting, so many gorgeous women in bikinis getting speared by tentacles and dragged under for the shark’s mouth to devour…holy sh*t, where do I even start to not give too much away??  Ok, I’ll hit on two personal favorite scenes:

First, an old dude is walking along the beach where a beautiful tourist just found and picked up a piece of gold.  She is immediately speared by a SHARKTOPUS tentacle and dragged out to sea to be devoured.  Does the old dude scream or run to get help or tell someone what’s happening on his beach?  Fuck no!!  He casually walks over to where she was, picks up the gold she dropped, and just saunters off like it ain’t no thang…haven’t laughed that hard in a very long time.

Second, our good buddy SHARKTOPUS gets really pissed and goes all Chevy Chase-style Land Shark (but without the doorbell ringing or slyly innocent sarcastic coaxing of his victims), jumps the beach, and a highway, and reaches up onto an overpass to snag himself a snack of an old school model VW Beetle (slug bug white!!) to munch on!!

Eric Flippin’ Roberts brought his A-Game as usual – I swear, the man can do anything.  From there we must give honorable mention to the hammy acting, the nonacting, and the cheesily bad CGI, as well as some of the questionable dialogue that allowed me & my SyFy Saturday texting/Facebook date Jen Sharlow to invent a couple of new drinking games, although as much as we drank I’m really not sure either of us remember what the code words were anymore…

I’ll say it now – best SyFy original flick since MEGA PIRAHNA, and I mean that in the most loving way possible.  But if you didn’t like that then you won’t like this.  I loved it, and so did many others that night. I even predict right here, for all two of you to read, that in the next year we’ll be getting SHARKTOPUS vs. MEGA PIRANHA…and that’s just fine by me.

Not sure at all if there’s a DVD release date yet, but you can bet your sweet tartar sauced ass that I’m going to preorder it as soon as I hear about it.  With SyFy, you usually know what you’re getting and what to expect.  But sometimes…SOMETIMES…the sun shines through the rain and you get a balls-out flick that throws caution to the wind, doesn’t take itself seriously at all and just has fun with it, and winds up being full of kickassitude like this flick.  If you’re looking for some fun, then you can’t go wrong with the cheesy goodness covered in awesome sauce that is SHARKTOPUS. 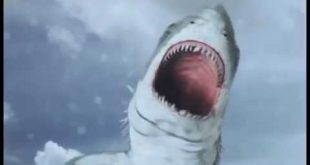 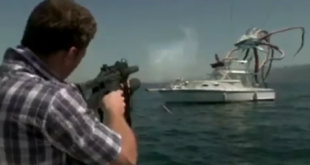 SYFY Channel Takes It To The Next Level, Check Out This Crazy Title

Sharktopus: more terror in the water on SYFY