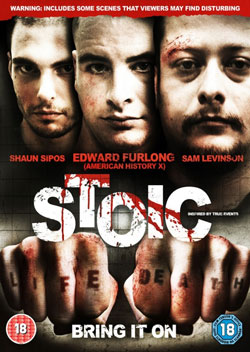 A heated game of poker causes three men incarcerated for nonviolent offenses to brutalize their cell mate before taking drastic measures in order to cover up their crime.

While the director name of Uwe Boll conjures up all sorts of ranging interests in the horror sector, it has long been a hit or miss relationship with his end products. As of late I must say that his products have been outstanding. Darkly outstanding for that matter. His subject matter content takes to the extreme and hits you in ways that you least expect. One of his previous films “Seed” left me with that impression. Though this film I’m reviewing is quite different than “Seed” it is absolutely shocking in the 10th degree. Based on a true story it is hard to imagine the human cruelty factor that this film delivers. We have seen many prison films over the years and have a certain amount of familiarity with what transpires. “Stoic” by comparison feels darker and dirtier. With that kind of setup you are probably wondering what it is that I’m referring to.

As many of these films begin, the note is as normal as expected. 4 young inmates share a cell together who pass the time with stories, conversation and poker games. Easy enough this cell situation is different than most as it contains a red panic button if something gets out of hand. The panic button is taboo as it means for all the inmates most likely an increase in sentence. The 4 are there for varying reasons, some more serious than the other but all for nonviolent offenses.. Though as they point out, you really don’t want to stir up things and have members taking sides.

The film begins simply with one of the young boys hanging himself. Then it cuts to interludes of each inmate being interrogated from an unknown source. They begin to describe the events that took place, the situation and with it a break down of “self contained within a personality” factors. A story begins and details the events that took place leading up to there investigation.

The four are Harry Katish (Edward Furlong), Mitch Palmer (Shaun Sipos), Peter Thompson (Sam Levinson) and Jack Ulrich (Steffen Mennekes). We are brought into a group that seems to be enjoying themselves. Poker in progress, they laugh about, talk about previous girlfriends and past crime experiences. Mitch, a passively but somewhat reclusive inmate is pretty savvy at poker. His skill results in his winning of all of the cigarettes from the others. Jokingly he professes that he’ll play the next hand with the loser having to eat a tube of toothpaste. They all agree and strangely enough Mitch loses. When he backs out of his word, the others begin to egg him on asking him to stick to his bet. Refusing still he jumps into his bunk and ignores the bet.

This begins the spiral. As each begins to taunt Mitch for his dishonesty, the price gets higher and higher resulting in more and more violent acts. First a beating, then force fed the toothpaste, and then forced to drink a concoction of varying ingredients. It becomes clear right away that the 3 have taken a strong disliking to Mitch …because of this, which over the course of hours fuels more acts of humiliation towards him. At this point it’s not going to benefit the readers to give away all the details, though your best bet is to watch the film and see how the events unfold.

As mentioned I’ve seen acts of cruelty in cinema but this film really engages you to the point of feeling for the victim and his ordeal. A shocking and brutal film. Stoic delivers nicely in its progression. The POV interviews only help add to the nature of the 3 individuals being questioned. All 4 deliver a strong performance, but its Edward Furlong’s character that might deliver the most shocks from his previous “hero”..all around good guy roles he’s played in the past. In fact, the film may embark another route of character roles from the actor down the road. Fantastically hardcore, Stoic is just plain extreme!