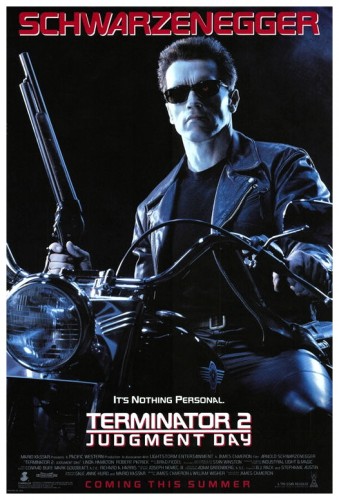 SYNOPSIS:
“More than ten years have passed since the first cyborg called the Terminator tried to kill Sarah Connor and her unborn son, John Connor. John Connor, the future leader of the human resistance, is now a healthy young boy. However another Terminator is sent back through time called the T-1000, which is more advanced and more powerful than its predecessor. The mission, to kill John Connor when he’s still a child. However, Sarah and John do not have to face this threat of a Terminator alone. Another Terminator is also sent back through time. The mission, to protect John and Sarah Connor at all costs. The battle for tomorrow has begun.” (courtesy IMDB)

REVIEW:
After his inauspicious gun-for-hire debut on Piranha II Flying Killers (1981), James Cameron‘s first real movie was The Terminator (1984), a blast of action, horror and science fiction that will mark all of his best films, from Aliens (1986) and The Abyss (1989) to Terminator II Judgment Day (1991) and Avatar (2009). The first Terminator was a modestly-budgeted science fiction thriller that deservedly became a box-office smash, cult favourite and a ’cause célèbre’ of critics who compared it to such films as Mad Max II The Road Warrior (1981) because of its bone-crushing violence, non-stop action, unrelenting suspense, black humour, bleak post-apocalyptic future, and obvious marriage between the filmmaker’s gadgetry and the gadgetry that dominates the screen. The Terminator launched two meteoric careers – the director to the top shelf of Hollywood aristocracy, and the star to the unlikely governorship of California.

It is also a movie that created a futuristic mythological time-shift parable that still resonates today. The first film in the cycle presents a naked Arnold Schwarzenegger arriving from the future, a T-800 cyborg programmed to assassinate Sarah Connor (Linda Hamilton) before she gives birth to John Connor, who will grow up to save the world from domination by machines. Schwarzenegger is an unemotional, seemingly unstoppable killing machine, armed with an astonishing knowledge of weaponry and able to self-repair among other abilities. His ruthless killing efficiency is only eventually defeated by Sarah, her lover Kyle Reese (Michael Biehn) – a resistance fighter also sent back from the future who fathers John – and simple human ingenuity. The film set up a time-warped story-line that could be revisited endlessly. 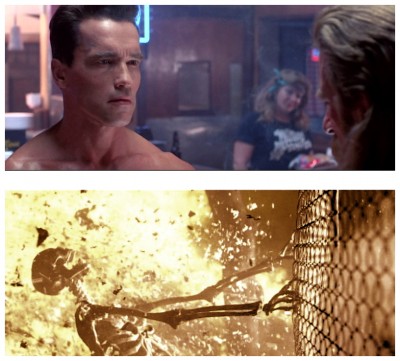 The history of the story is a convoluted one involving Cameron’s fevered nightmare of the Terminator while making Piranha II Flying Killers and author Harlan Ellison‘s short story Soldier, adapted as an episode of The Outer Limits television series. Ellison threatened to sue the distributor Orion Pictures for plagiarism and, against Cameron’s wishes, settled the matter out-of-court for a substantial amount of money and a screen credit stating that “The producers wish to acknowledge the works of Harlan Ellison.” A very good science fiction story indeed, but you’ll find little similarity between Soldier and Cameron’s movie. In my humble yet always accurate opinion, to find the real source of The Terminator you must seek out a film entitled Cyborg 2087 (1966) starring Michael Rennie as Garth, a cyborg from the future who travels back in time to 1966 to prevent a scientist from revealing his new discovery which will make mind control possible and create tyranny in Garth’s time. Garth is also being pursued by two cyborgs known as Tracers out to stop him, but I digress. 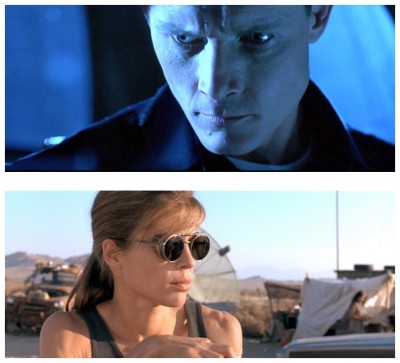 Having displayed a knack for action-oriented science fiction sequels with Aliens (1986), Cameron expands upon the popular myth he created in The Terminator with Terminator II Judgment Day (1991), made a relatively long seven years after the original, which ingeniously twists the plot and characters. Picking up roughly thirteen years after the original, T2 follows the basic architecture as a cyborg is sent back from the year 2029 to assassinate future resistance leader John Connor (Edward Furlong), now a techno-savvy street-smart juvenile living in a foster home. Led to believe his mother is delusional with her stories of Terminator killing machines and a time-traveling father, John has no contact with the institutionalised Sarah Connor (Linda Hamilton). This changes when John is confronted by a T-800 (Arnold Schwarzenegger), the machine that tried to kill his mother. But this Terminator is different – it has been reprogrammed and sent back by John himself in order to protect him from the T-1000 (Robert Patrick), a shape-shifting liquid-metal Terminator currently cruising Los Angeles disguised as a police officer. 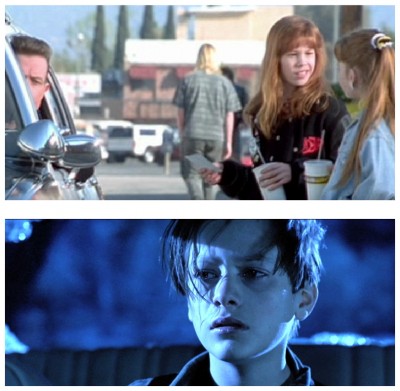 Realising his mother isn’t crazy and fearing for her safety, John orders the T-800 to break Sarah out of the mental institution. Together the trio take off with the T-1000 in hot pursuit, but things go awry when Sarah disappears with the goal of assassinating researcher Miles Dyson (Joe Morton), head of Cyberdyne, the company that eventually generates Terminator technology and the all-powerful Skynet. Controversially it was the first film to command a US$100 million budget, almost ironic since Cameron got his start in the business under the mentorship of my old friend Roger Corman, king of the B-movies famous for making films on less than a shoestring. When asked if he was offended by Cameron’s gigantic budgets, Roger stated that he didn’t mind at all, because all the money is seen on-screen in over-the-top stunt set-pieces involving cars, motorcycles, trailer-trucks, helicopters and Oscar-winning special effects. 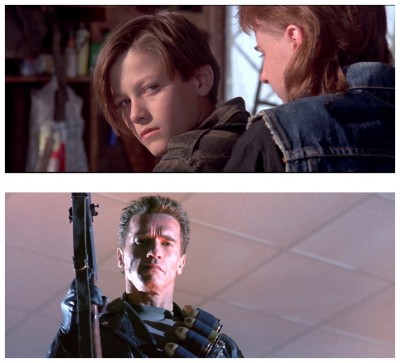 The movies that offend Roger are the multi-million-dollar efforts that involve little more than a couple of people in a couple of rooms. Cameron also utilises the computer generated imagery developed for his earlier The Abyss (1989) to display the various replications of the liquid metal T-1000 with astonishing effect. Amid all this, Cameron still finds time to elaborate on the themes of self-reliance in regard to one’s future: “There is no fate but what we make.” T2 is a rare sequel in that it successfully inverts the roles from the original. Perceptive of Schwarzenegger’s popularity, the filmmakers effortlessly re-cast the iconic (and heretofore villainous) Terminator figure as this entry’s hero without sacrificing the character’s appetite for brutality. In addition, the heroine Sarah Connor morphs from innocent victim in the first film to tough warrior woman, an astonishing physical and mental transformation by Hamilton. 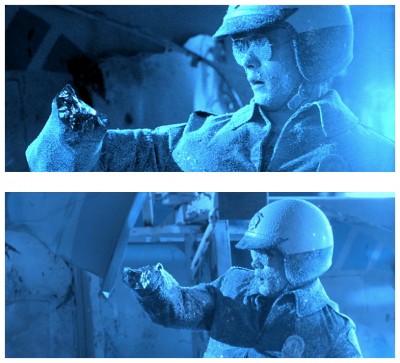 The following two sequels in the franchise – Terminator III Rise Of The Machines (2003) and Terminator Salvation (2009) – suffered from the usual franchise problems: the original visionary writer-director was long-gone, and the star was now too busy governing California. There were rumours going around that Schwarzenegger was going to make an appearance in Terminator Salvation as the original T-800 model, but he denied any involvement. It was later revealed that although he would appear briefly he would not be shooting any new footage, and instead his image was inserted into the movie utilising stock footage from the first film. Schwarzenegger made a brief cameo in The Expendables (2010) alongside fellow Planet Hollywood investors Sylvester Stallone and Bruce Willis. 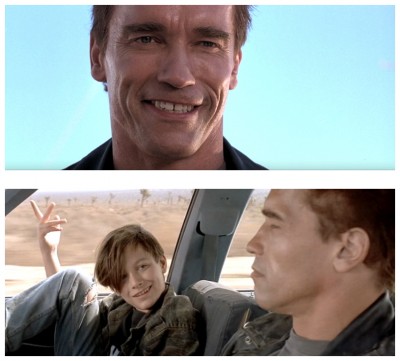 In 2011, just before leaving office as Governor of California, Schwarzenegger was being courted for several films, including sequels to The Terminator, Predator (1987) and The Running Man (1987), as well as developing a comic superhero character named The Governator with Marvel‘s Stan Lee. More recently Schwarzenegger could be spotted in The Expendables II (2012) with more dialogue this time around, and starring in The Last Stand (2013) as a Los Angeles cop-turned-sheriff. The next time we see Schwarzenegger on the silver screen may well be as King Conan in The Legend Of Conan (2014) which will hopefully be directed by John Milius. It seems that Schwarzenegger will always be there to say, “I’ll be back.” It’s with this rather threatening phrase I’ll politely invite you to please join me again next week when I have the opportunity to throw you another bone of contention and harrow you to the marrow with another blood-curdling excursion through the Public Domain for…Horror News! Toodles! 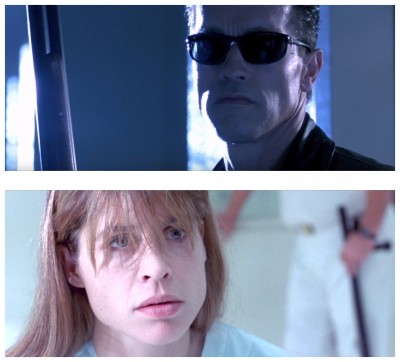