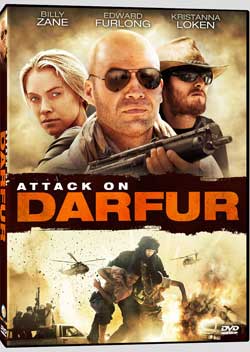 A group of journalists visiting Sudan end up in a small village called Darfur. Once there they hear that a brutal and violent militia group is heading their way to wipe out every living man, woman, and child that they come across. The journalists are met with a moral dilemma upon hearing this news Should they stay and try to help the villagers fight off the militia group or should they just get the hell out of there to where they will be safe. If they stay and help it almost means certain death, but at the same time if they stay there is a slim chance that they can at least save some of the villagers. What will our heroes do? Stay and fight (and possibly die in the process) or save themselves by fleeing and leaving the villagers behind to take care of themselves?

This was the second Uwe Boll helmed movie I have watched this week and to my surprise both of them were pretty damn good. Though I would normally skip the chance to watch a movie like “Attack on Darfur” I am glad that I got to see it as I thought that it was actually not bad at all. While it isn’t quite a horror film there are some truly horrifying things that take place in the movie and it is very unnerving to me that some of the things that take place in “Attack on Darfur” actually take place every day somewhere. I thought that the movie was well-written, had a talented cast, and it just made me think in general.

If I were in the position of the journalists from the film I am honestly not sure what I would do. I would like to think that I would stay behind and help the villagers who were otherwise going to be wiped off the face of the earth, but if I was ever actually faced with the situation I am not no sure I wouldn’t just say “the hell with it” and run off to save myself. I thought that the journalist were put in a tough spot and had a very hard decision to make. Of course some of them want to leave while some want to stay, and each give compelling arguments for their reasoning. If you could stay behind and save some people but die in the process would you do it? Could you live with the guilt of knowing that you could have saved some lives but didn’t because you were too busy running away to save your own life?

I really liked the cast a great deal as well. I have always been a huge fan of Billy Zane (as is my wife, she starts drooling every time she talks about him as she thinks that he is just gorgeous), and he is good as usual in the role of Bob Jones. The lovely and talented Kristanna Loken (from Rob Zombie’s “Halloween” remake) is excellent as the sympathetic Malin, and Edward Furlong rocks as Adrian. I have always dug Furlong as well (What? What are you laughing about?) and thought that Adrian was probably my favorite character from the film. Sammy Sheik is also very good as the evil and intimidating militia leader who really enjoys blowing away innocent people.

While I think some people may not care for the ending, I for one liked it. It doesn’t have the happiest ending in the world, but there is a message of hope at the conclusion. I thought that the ending was pretty powerful and it would have ruined the rest of the movie had it ended in a different way. Having it end on such a bittersweet note really works, and I think that it would have been a huge mistake to have given it a happy ending. I applaud the people behind the film for ending it the way that they did.

I found myself really enjoying “Attack on Darfur.” I didn’t think that I would since it is not really the type of movie that I go out of my way to see, but I ended up digging it. It isn’t for everyone, but I think that if you are in the mood for something just a little different it may be something you will want to check out. Give it a go if you come across a copy, you may be surprised by how much you like it.