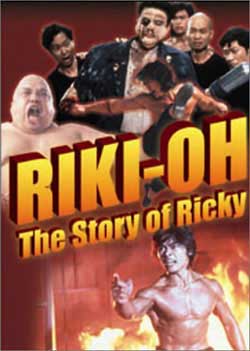 Hard man Ricky is incarcerated in a futuristic prison where ultra-violence is his only means of survival in the corrupt, sadistic system. He must battle his way quite literally ‘through’ the feared ‘gang of four’, and undergo multiple tortures before facing the governor in one of the goriest climaxes ever seen.

As we open on the film, we follow a bus on its way to a prison facility. A title card comes up that gives a little bit more background on the state of things. By 2001 AD capitalized countries have privatized al government organizations. Prisons have become franchised businesses. The year is presented as the future way of life in which sets the stage for the prison activity to follow. 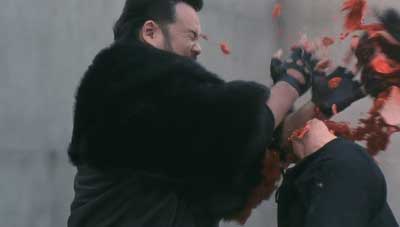 Riki-Oh Saiga (Siu-Wong Fan), a 21 year old prisoner who was convicted of manslaughter, comes with instructions to be avoided at all costs as he’s extremely dangerous. The flip side is, he doesn’t come across as a hardened criminal but rather an individual with heart. The situation is unfortunate though but more unfortunate for those who challenge him. As expected, a prison life is already in motion with the inmates dividing the prison into 4 sections. Each section is ruled by a leader of that wing. The leaders are all of considerable skill or strength that remain unchallenged up to this point. Corruption has also run rampant as the inmates are constantly abused by the leaders, the guards and then the prison officials on top of that. What we experience is a cruel, brutal and painful way of life. 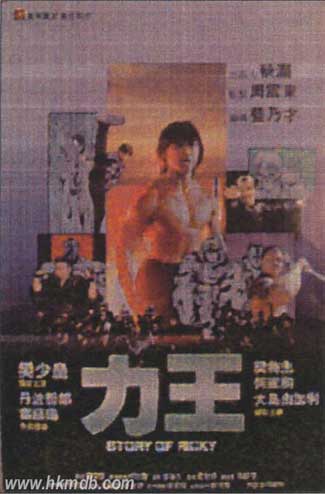 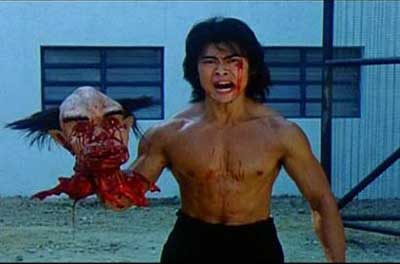 Riki is not like the others. Born with an ability… he possesses super strength. We are never really explained exactly why that is… just that he is skilled as well in martial arts. Though his clumsiness effects his balance which is revealed in his early days. Riki confides in his uncle to instruct him into the ways of a martial arts they call chico. In a flash back sequence we see him practicing against tombstones at the town graveyard. He is taught to defy death and harness energy as a weapon. He is also told that his strength increases as the energy feeds into it.

Riki comes across as a combo Bruce Lee meets “Fist of the North Star”. In essence this isn’t a true martial arts film though the battles usually involved some level of this. The movie at times works much like a live comicbook as the gang of 4 appear and show off there skills. The characters are introduced as Rogan, Tarzan, and Bragon. There skills vary though they are equally effective on there own.

Things heat up as Riki is constantly challenged by those who feel they are more powerful. The reality is when Riki attacks it’s not “just” an attack. Much like in gory manga animations, Ricki’s strength enables him to introduce bone crushing, gut smattering blows that defy logic. In one instance, a recently hired brute attacks him while in the shower. The huge beast of a man is quickly defeated and killed per Ricki’s counter blows that punch clean thru the mans stomach. Alot of this kind of showmanship and gory extremes accompany this film making every battle scene a chance to show off more effect driven nastiness. The nastiness is amplified by the results which include things like nails going thru faces, skin cut clean off and grinding folks into meat grinders. But thats what makes this such a gem of a film. 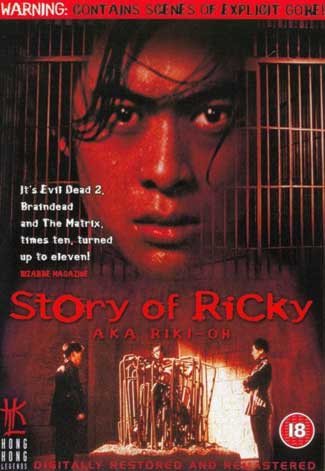 The film progresses into a bloody finale that has to be seen! Much in the tradition of these films there is alot of disbelief suspension when it comes to the powers some of the main characters possess. Riki though stands as symbol of defying corruption even with gore punching blows at his command. 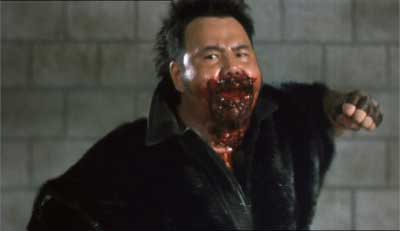 On fact checking the following 2 tidbits were mentioned on IMDB:
So much and so thick was the fake blood used in the “Meat Grinder” finale that Siu-Wong Fan, the actor who played Ricky, could not wash the red off his skin for three days.

This was the first Hong Kong movie ever to receive a “Category III” rating for violence rather than sex. 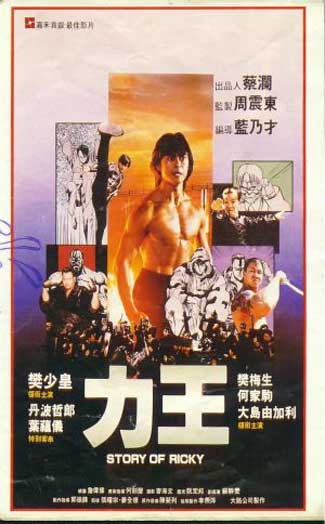 Ricki-OH is one bad ass film. The gore and violence is properly counter balanced by a sort of good vs evil approach. Ricki although powerful is the weak mans robin hood who defends rather than engaging. I had read this title many times as being one of the more disturbing ones to check out in the asian cinema. The disturbing elements are present but they often are at a price to pay for inflicted violence. Beyond that there is true heart to this film that clearly places it now among one of my favorites. If you can handle the brutality, Riki-oh is a film to own!