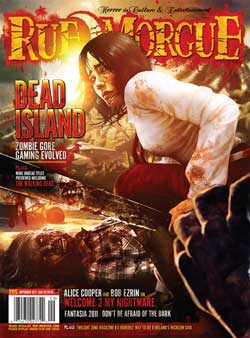 Welcome to another quick overview on new mag releases. We are back again with Rue Morgue who have furnished a firm helping of news and articles of interest.

My first attention actually goes to the commentary which talks about the horror site movements and the problems with borrowed content. It has some great points made and something we’d had to unfortunately deal with more than once. In fact the commentary matches a profile of a like instance, but as we say…onward and forward. There is no denying that horror sites AND entertainment sites are easily ranging in the hundreds these days. Us of course being one of them. At the end of the day, I often contemplate myself, what is worth more to readers…more coverage of the same things or new articles, approaches and coverage of films that lurk WAY below mainstream. It’s a tough call as Internet numbers are the heart of interest these days. So in reality while an original article on Vincent Price seems much more rewarding, a quick news flash of Johnny Depp brings in more numbers.

Moving on, Alice Copper..an constant fav of mine is back with his return to Welcome to my Nightmare. I found the articles on Alice and Ezrin to be motivating as they report on how the team has recruited some old members of the band and made an attempt to recall classic Alice. A personal fav, by the way. If this article had an intention of being a marketing piece…it worked in my opinion. I’m anticipating the release THAT much more. Go Alice!!!

(Update – I just acquired the new release – and “Welcome 2 My Nightmare (2011) is a hands down winner of a release. It’s quality Alice once again, probably my favorite since “From the Inside (1999)”)

Per the front cover, this issue looks at the game “Dead Island“. Now there is a pretty decent article on gaming and the game itself, but due to the fact that I’m not a gamer, it wasn’t a reading interest of mine. In any case, “Dead Island” looks pretty damn cool, so maybe its time for me to get on board.

This issue features a nice overview on the films showing at Fantasia 2011. Being sort of “what’s next in horror” collector, articles like these are usually referenced several times as I check on inventory and what from this list hasn’t arrived yet. Maybe that’s just me, but “lists” are a way to win me over.

“Don’t Be Afraid of the Dark” does a 1 pager. It’s a bit more of the reasons from the team on “why” we should go see this. Since I’ve already seen it and didn’t care for it, it kind of fell on deaf ears.

That should wrap it up on the front end, of course Rue features lots of reviews and product updates, so if your an info junkie, then it’s got just what you need.