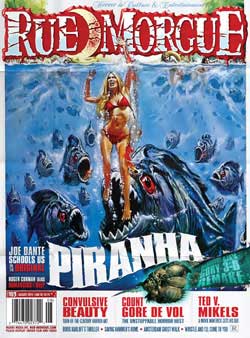 Every ones talking about Piranhas, and of course hot on its trail is the new film in 3D and an old “classic” revived from the grave. Rue Morgue pays their tribute with a full cover featuring the classic art that ripped off Jaws in a time when going into the waters was more scarier than Leather face. Of course it doesn’t stop there as the mag has also included a 5 pages dedicated to the old release.

Joe Dante is on hand to give us a past history lowdown on the Roger Corman produced terror in the waters film. The thing that gets me is that often these films sit around for years, not rented, not talked about and then years later someone mentions a remake and this old cheaply made spoof on water horror comes rising to the surface like a messiah that lost its way. Well with interview in hand, Joe brings things back down to earth with some insight into this little engine that could. As I’m writing this, these is all the rage and will probably fuel some decent sells on the old beast as well. Good for them. Every dog will have its day and this time it’s a piranha.

“Convulsive Beauty” does what many few have tread. It actually features some of this bizarrely old classic art fair. Rats eating bodies, abstract decor and plenty of Bosche looking oddities that ask the question, what were they thinking back then that motivated this artistic madness? Well I find it pretty cool and also pretty old school. While few dabble in this style anymore, it’s more appropriate for framing than much of the Pshop goo goo these days. Also, keep in mind that these pieces were pure pen and ink, as classic as forgotten hell artistry gets.

Horror hosts are seemingly getting a bit more attention as well. I’m not sure what started the trend, but I swear I’ve read 4 articles in the past few months on these odd looking late night hosts. Count gore Vol, who I’ve never heard of is featured with a nice little ditty honoring his efforts and his colleagues.

Speaking of classics…does anyone remember “Astro Zombies”? I sure don’t but I probably have seen it in some youthful late night TV entertainment. Ted V. Mikles creator of AZ and a few others is back with some nice gab on his films. I still like the idea that mags will take the time and educate many on other things besides SAW, Eli Roth and remakes…so kudos to Rue!

Clive Barker is in the news as he contributes his time to some literary horror gatherings and Hammer sets become housing for a new crop who probably could care less about the historical aspect. Oh well, as they say, something’s got to give. In this case even horror has its moments. 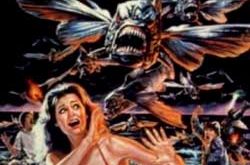 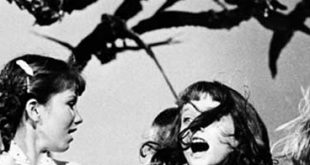