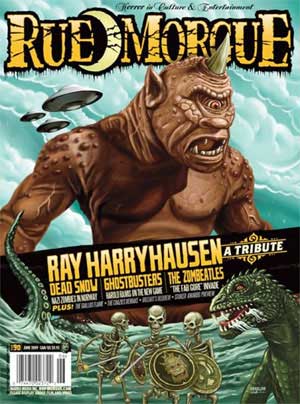 I’ve always considered Rue Morgue as a favorite printed horror mag. Hands down the design work and layouts far exceed its competitor Fangoria as far as a interestingly visual presentation. (Though with due respect to Fangoria, which I read monthly as well).

Add to that a firm appreciation for older material to balance the new stuff and it makes for a nice contrast to everything else that comes out. This issue I’m reviewing is no exception as it’s a beautifully illustrated and designed edition.

More importantly, there is a special homage to Ray Harryhausen which is laid out over 4 pages as well as additional pages dedicated to stop motion animation and a book dedication to Ray. You’ll recognize all your childhood favorites from the Sinbad, Argonauts, and Clash of the Titans days. A series of films I quite honestly couldn’t get enough of as a child. It’s great to see a nice feature that covers the stop motion material as before CGI it was the only source of true cinematic monster animation that didn’t involve costumes.

“Re-issues” is always fun, as it gives me a chance to reacquaint myself with some older but goodies that might have slipped my memory. I don’t know about you but I love” to come across an old title gem that I’ve never seen. Something about that era of filmmaking I guess…….

One that particularly caught my eye was “Don’t come alone” – a small feature on the “House of Frightenstein” series. It was only up to recently that I even remembered watching this as a child. Then there was that whirlwind of ..”oh ya…. “Grizelda”, “the Librarian”, Igor”….. now I remember. A cool flashback of good old cheesy horror times….kind of falls in there with the “Lidsville” and “Puff and Stuff” days . Anyways – highly recommend this series for nostalgic reasons. The content is pretty out there like a bad acid trip but its fun nonetheless.

This issue contains alot of new products resources and descriptions. My favorite being “Blood in 4 colors” “Ninth Circle” and “Audio Drome”.

Gore Melt introduces us to a title I wasn’t familiar with called “HEADer”. Looks like right up my alley, so hopefully I’ll get a chance to see it soon.

Highlight for me included a nice overview of the film “Dead Snow”. If you have checked it out yet……. then your overdue for a viewing. A great great nazi Zombie horror-funfest that is just what we all wish we saw more of coming out. “Never made” lists 2 titles that spawned cool trailers and no film followups…….what gives??? Well the good news is that one of those titles is still being negotiated and might just rear its ugly head in the near future.

Blitzkrieg Rot takes a hard look at more zombie -plotiation films, which come to think of it I’m overdue on reviewing a few. “Dead snow” clearly falls into that category, though this article examines titles like “the Bunker”, “ShockWaves” and “Oasis of the Zombies”

Who ya gonna call? Well its not Ghost Busters 3, but it is a computer rendering Ghost Busters for the latest GB game. From the looks of it….its pretty cool…but I’m still holding out for a film myself.

Heard of the Zombeatles? – Well shame on you….. checkout the article then go check out the trailers.

Great stuff! all around! 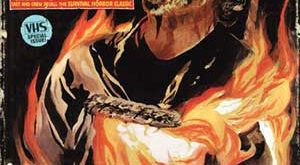