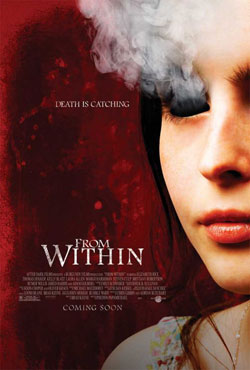 When a rash of mysterious suicides strikes the idyllic burg of Grovetown, it galvanizes the faith of the largely Christian community, which staunchly clings to its evangelical beliefs. Convinced that the deaths are the work of something far more sinister than sheer fate, teenagers Lindsay (Elizabeth Rice) and Aidan (Thomas Dekker) band together to unearth the real culprits … and uncover a shocking revelation.

I want to make it clear that I absolutely love balls-out horror. Unapologetic, unadulterated, unrelenting assaults on the senses that coat you from head to toe in Karo blood and ooey-gooey innards get my blood going like nothin’ else. At the same time, it’s nice to occasionally come across a movie that takes its time with me, oozing through my pores to poke at my brain. Films that are disturbing and moving and scary on deeper psychological level. Burnt Offerings, the original The Haunting, Angel Heart and Frailty are high on my list and while From Within is not quite up to those standards, it has wormed its way onto said list. 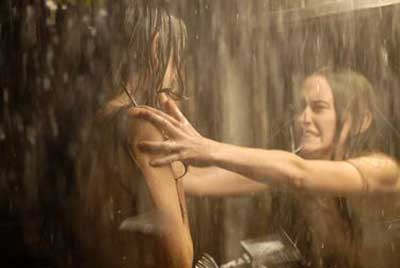 Right from the get-go, we see a young man and what we assume to be his girlfriend cuddling by the pier while he reads what sounds like poetry. It’s an adorable scene of adolescent bliss until he pulls out a gun and blows a good portion of his skull all over her. From then on, the townspeople begin to kill themselves without apparent motive and some very dark skeletons start rattling around in the collective closet of this picture-perfect American town. 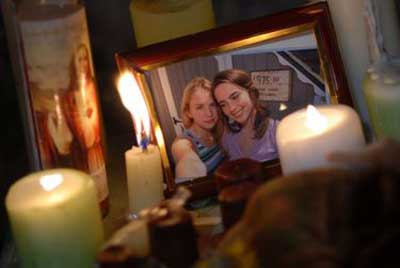 I couldn’t help thinking of Suicide Club at this point, even though the majority of the plot bears almost no resemblance from here on out, but the connection to the late 90’s Japanese horror is undeniable. We’ve got all of the expected tropes from the curse that is passed along like a virus to the psychological implications of water and even a black-haired pasty spectre. Really, there is no surprise that this was written by the same guy who peened the script for The Grudge 3 but the interesting thing here is how he uses those tropes and that style of horror.

Instead of the usual American retreads of Japanese films that tended to crib plot points without understanding the cultural psychology that made them work so well for their home audiences, this is an original film that ties this approach directly to the collective American unconscious by way of a bit of the Crucible. The template may have come from Japan, but the meat is 100% pure American diatribe against the evils of unquestioned religious fervor and what I am certain is a comment on the causes and effects of the “war on terror”. And all of this is done from what is, at its heart, a riff on Romeo and Juliet. 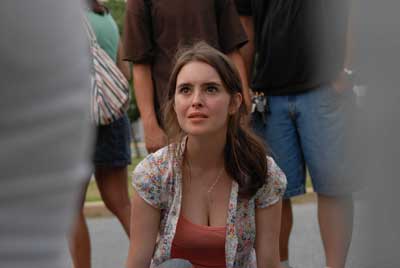 For those of you worried about the details: Director Phedon Papamichael (mostly known as a cinematographer for films like Patch Adams, Identity, Sideways, W. and the mighty Prayer of the Rollerboys) shows a good eye for expressive scenery and the patience necessary to let this story play out as it needs to. Elizabeth Rice (Lindsay) nailed the confusion, anger, frustration and pain of a girl caught in the middle while almost everyone else played their single note characters well but without major impact. I don’t remember a single thing about the soundtrack except the haunting folk song that played over the opening credits, plaintively asking: “This voice, is it calling for you?” 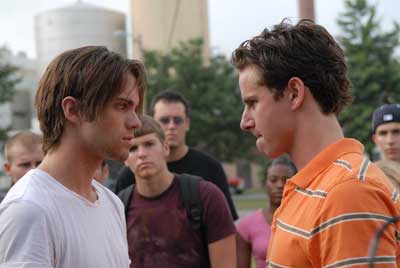 Unfortunately, there are some rather clumsy “scare” scenes involving the spectres that haunt future victims that border on laughable due in part to sub-par CG work but mostly because of how out-of-sync they were with the overall feel of the film. Further, the fact that so many of the characters are so incredibly thin is a bit grating. I get that this is part of the argument that religion that is untempered by thought and basic humanity does reduce you to a caricature of a person, but it still bugged me a bit. However, those problems don’t hurt it at all as long as this is your type of horror. 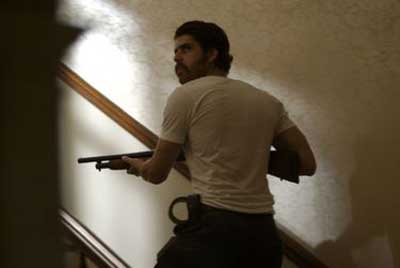 As a caveat, the grue is minimal, though there is a decent neck stabbing, and there is nary a tit to be seen during the whole damn thing. Call it classy or call it pretentious but it is what it is and it does that quite well. 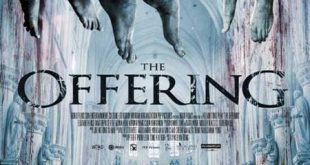