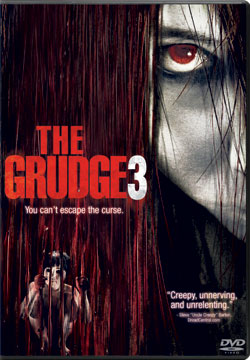 Fearful of meeting a gruesome death, young Jake (Matthew Knight) tries to convince his psychiatrist (Shawnee Smith) that an evil curse led to the slaughter of his entire family. Meanwhile, a young woman from Japan (Emi Ikehata) arrives in Chicago and attempts to stop the curse for good. This third installment of the popular Grudge horror movie series also stars Marina Sirtis, Beau Mirchoff and Johanna E. Braddy.

From the very opening credits, the Grudge franchise has almost taken on a TV series persona. Flashbacks are presented from the first 2 films, if you are a newcomer jumping right in almost in the same way as you’d see at the start of a CW series. This time we find ourselves smack dab on where Grudge 2 left off back in New York City.

Now I’ve read enough reviews to know that the grudge franchise doesn’t work for everyone. I think mainly due to the re-occurring white faced asian girl that has overstayed her welcome, though I still don’t mind it as long as its done in a scary way. With 3 films under its belt our anti-hero Kayako Saeki has almost become a reflection of a modern day Freddy Krueger, as she pretty much does and appears where she pleases with the intent on killing people. In fact, it seems that once she appears, that person is usually going to get killed one way or another. Now I know that Kayako has to somehow get tied in per relationship, research or some level of interest in her, but the lines are very gray.

I thought that this round most of what we see is just a re-cap of what we’ve seen before. The exception being some CGI placed appearances of Kayako which were just not well executed. For instance, the CGI face that appears in the painting. A very quick down and dirty CGI compositing trick that any desktop dabbler can do now nowadays Things like that cheapen the journey. Usual creepy moments like her jerky movements from previous grudge films are enhanced a bit too much here, so what we get is not a natural progression of jerkiness but a jerky approach that is chopped up with edit cuts. My advice here would have been, let her run her course in natural form, lay back on the speed-ups. Its the combination of all these combined that effects this end product.

I also noticed that Kayako’s appearances were not lit properly. The end result is an inherit more detailed look which takes away form her previous eerie ghostly presence. What I mean by that is its real obvious that its an asian actor with alot of white paint sprayed on her. Not that that idea has changed, though when presented under better lighting, the aura has a much more higher level of creepiness. The same goes for the blue kid “, Toshio”….ok he is really blue in Grudge 3. Should, Toshio really be “that” smurf-like??

In all, I just wasn’t scared this round. Maybe it was the setting, maybe the music didn’t accent properly or maybe scary Kayako came off more like a handicapped clown than a vengeful terror.

I will confess that I did enjoy seeing Shawnee in a new horror role carrying over from the SAW franchise. Though as we’ll find out, her appearance is pretty short-lived. Which is another aspect these Grudge films have latched on to….the premise …everyone dies including all the main actors. It’s almost a written in spoiler before the movie even begins. But getting back to it, I would have loved to see Shawnee carry out the role and franchise and bring some of here dynamics. 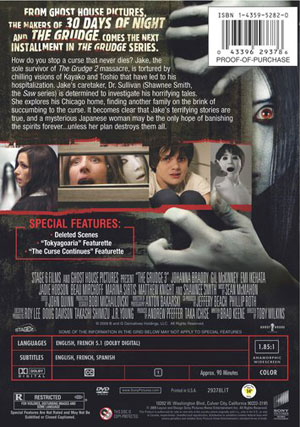 I have followed the Grudge series pretty dedicatedly, although I have to say 3 is pretty much that. The worst in the series and progressively worst from 1-3. I say this from a disappointment standpoint rather than a need to slam the filmmakers. As a Grudge fan I really “want” to be entertained and supportive. But much like the downfall of the Hellraiser films, I feel like the franchise has been abandoned in importance. With that thought in mind, I can’t say Grudge 3 really did anything for me new. More to my surprise was the fact that up and comer Toby Wilkins was directing this one coming off the well received “Splinter”. This film probably was a favor to the studio, but it took away more than it contributed. I think Toby is a great director, though perhaps this was a rush job for him rather than his full usual attention. At this point in film releases, we are seeing a huge amount of name and franchise carryovers, though what we are getting really isnt helping things. It’s just giving more folks a reason to slam films than they deserve.

My final thoughts on this film is actually a thought that occurred to me based on the status quo of things. Have horror films suffered not only “because” of the economy but also in the ability to finance cheaper FX and editors due to cutbacks? If that is true, then evidence of that is present in this new Grudge release.