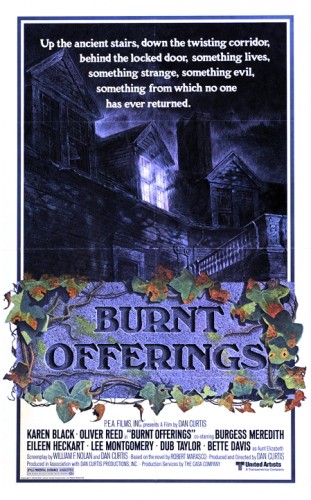 “Haunted house chiller from Dan Curtis has Oliver Reed and Karen Black as summer caretakers moving into Gothic house with their young son. The catch? The house rejuvenates a part of itself with each death that occurs on its premises.” (courtesy IMDB)

One of the oldest possession themes of all is the house or building possessed of evil, from The Turn Of The Screw by Henry James (1898) to The Haunting Of Hill House by Shirley Jackson (1959) to The Shining by Stephen King (1977). In fact the ‘Evil House’ has become so universal it was the subject of The Simpsons first segment of their very first Treehouse Of Horror episode, entitled Bad Dream House. In Burnt Offerings (1976) a mansion near the sea is rented for the summer by Marian and Ben Rolf (Karen Black and my old drinking buddy Oliver Reed) with their son Davey (Lee Montgomery) and old aunty Elizabeth (Bette Davis). Locked away upstairs is the landlord’s unseen invalid mother, whose meals are left for her on a tray.

Bad things happen – flamboyantly choreographed by director Dan Curtis – except to wife Marian, who eerily falls in love with the house. Adapted from the 1973 novel by Robert Marasco. Mr. Curtis told me that he actually read the novel years before he got the offer to direct this film, saying that he hated the open-ended conclusion of the novel and, at the time, thought to himself that he would pity anyone who would attempt to make it into a movie. Ironically years later the offer to direct the movie version of the novel came to him and the first thing he did was write an ending that he liked – the one featured in the film. It turns out that the house feeds on suffering, and when aunty Elizabeth dies and Dad inexplicably attacks Davey, the paintwork starts renewing itself and the mansion begins to spruce itself up. It will not let them escape, and when Dad goes upstairs to confront the previously unseen old lady he finds…well, as twist endings go, it’s not too bad.

We’ve seen better from Mr. Curtis, who is best known for his television miniseries The Winds Of War and War And Remembrance (co-produced by scream queen Barbara Steele no less!), and the very first supernatural soap opera Dark Shadows. His series of macabre movies include The Night Stalker (1972), The Night Strangler (1973), Intruders (1992), House Of Dark Shadows (1970), Night Of Dark Shadows (1971), Trilogy Of Terror (1975), The Norliss Tapes (1973), The Turn Of The Screw (1974), Curse Of The Black Widow (1977), Dead Of Night (1977), and Scream Of The Wolf (1974). He frequently worked with author Richard Matheson but, in the case of Burnt Offerings, the script was written by William F. Nolan, co-creator of Logan’s Run (1976).

For many decades Bette Davis was well-known for being difficult on-set, a reputation which only got worse as time took its toll. The same year as Burnt Offerings, Ms. Davis also played a supporting role in The Disappearance Of Aimee (1976), but clashed with co-stars Karen Black and Faye Dunaway, because she felt that neither extended her an appropriate degree of respect, and that their on-set behaviour was unprofessional. Much easier to work with was Burgess Meredith, who not only had many more roles than Ms. Davis, but was unafraid of smaller character parts. Come the late seventies Burgess enjoyed a resurgence in popularity being cast in major roles in films such as The Day Of The Locust (1975), The Hindenburg (1975), Rocky (1976), The Sentinel (1977), Foul Play (1978), Magic (1978), The Manitou (1978), Rocky II (1979), When Time Ran Out (1980) and Clash Of The Titans (1981).

My old drinking buddy Ollie Reed was irritated by television chat shows that concentrated on his drinking rather than his acting. For instance, David Letterman once cut to a commercial when it appeared Ollie might get violent after being asked too many questions about his drinking and, on the Johnny Carson show, actress Shelley Winters poured a glass of whiskey over Ollie’s head when he made some rather derogatory comments about women. On the other side of the Atlantic he was forced to leave the set of the Channel Four talk show After Dark when he arrived drunk and asked feminist author Kate Millett to “Give us a kiss, big tits!” Despite the controversy, I can assure you he was not always as drunk on chat shows as he appeared to be, but was simply acting the part to liven things up, not unlike another old drinking buddy of mine, Dean Martin. Ollie passed away of a heart attack after a night of hard drinking, which included three bottles of rum and arm wrestling victories over five sailors – he was only sixty-one years old!

Like Ollie, Bette and Burgess, Karen Black was also an Oscar-nominee, for her role as Jack Nicholson’s girlfriend in Five Easy Pieces (1970). She was the stewardess forced to fly the jumbo jet in Airport ’75 (1974) and was given multiple roles in Dan Curtis’s Trilogy Of Terror (1975), most chillingly as Amelia, the lonely owner of a cursed Zuni fetish doll that comes to life and attempts to kill her. During the next two years Karen was cast in major parts by famous directors: The Day Of The Locust (1975) by John Schlesinger, Nashville (1975) by Robert Altman, and Family Plot (1976), the final film from movie maestro Alfred Hitchcock.

Burnt Offerings may lose points because of Ollie Reed’s overacting, and the director’s self-indulgent visuals constantly straining for effect, consequently disrupting the viewers concentration, but Karen Black gives a performance of real depth which truly deserves a better setting. And it’s with that thought in mind I’ll bid you a good night and look forward to your company next week when I have another opportunity to raise the hackles on your goose-bumps with more ambient atmosphere so thick you could carve it with a chainsaw, in more pants-filling fright-nights for…Horror News! Toodles! 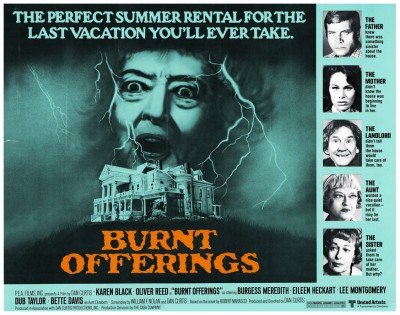