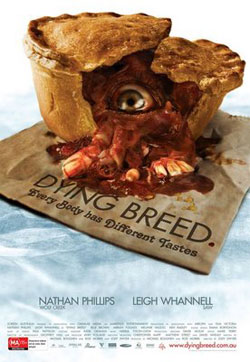 Eight years ago, Nina’s (Mirrah Foulkes) sister disappeared in the Australian backcountry while searching for the mythical Tasmanian tiger. With only one clue — a photograph of a mysterious paw print — in hand, Nina sets out to continue her sister’s work. But something else awaits Nina and her team: cannibalistic descendents of a 19th-century psycho known as “the Pieman.” Leigh Whannell (Saw) and Nathan Phillips co-star in this savage thriller.

Presented in typical Aussie style, our new film today comes in the way of Dying Breed. 4 friends head out on a nature excursion over the river in search of the famed Tasmanian tiger. Cue in car ride, trip over the river with scary boatman and arrival. As they encounter the locals who are typically old school, rough around the edges and unintentionally questionable it’s apparent that they are a fish out of water in a big sea. 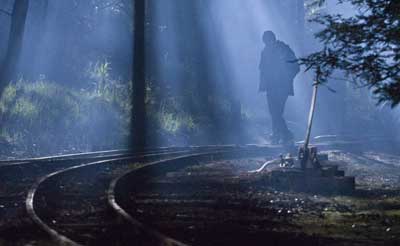 The 4 friends are on a quest to gather evidence for a potentially funded project if they can produce the evidence. Nina, (Mirrah Foulkes) the lead of the expedition has brought them here after receiving word that her recently deceased sister who had started the hunt. 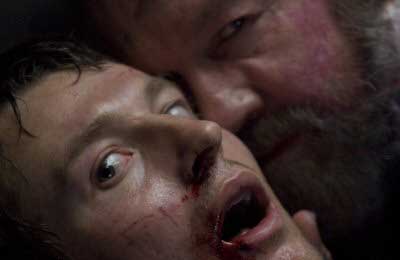 As they head foolishly into the wild with little preparation and a hope to catch some proof the fun begins to rear its ugly head. Apparantly a 19th century descendant and family headed by a flesh eating madmen named the “pie man” who lives in those parts likes the taste of human flesh. Little dothey know that they are being hunted too. The film also stars actors Leigh Whannell, Nathan Phillips and Melanie Vallejo.

As you can guess there are some pretty graphic scenes including aftermath shots of body parts, flesh eating goodness and such. More graphically is a scene where the pie man literally eats the mouth off of one of his victims. We are treated to a few more kicks here and there but mostly just alot of chase and scream routines through the forest. Oh ya, did I mention the pie man likes to use bear traps here and there to aid in his catch.

Though with the intensity of the situation I don’t think we are seeing anything new that hasn’t been presented in several diff ways before. The essence? City folks go to forest and mess with nature, nature doesn’t take kindly and retaliates the only way its knows how. This time the nature is a family of flesh eaters. Directed by Jody Dwyer, the film received some advance publicity due to its banned marketing poster. But like in many of these cases, the expectation is to buy into the marketing on a just average story to sell on consumers. 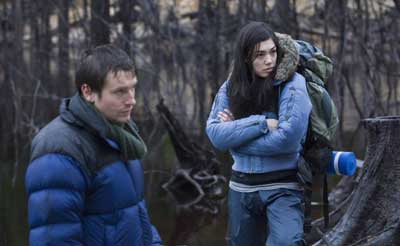 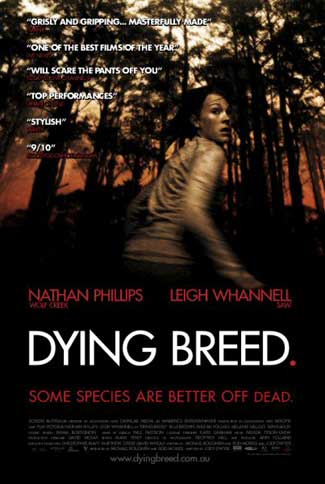 The film moves with pace that keeps the intensity so no problem there, however my issues were one the Aussie accents were a bit strong at times which made for some lines hard to understand. Also too much of the film played out pretty much as expected. Even with the deceased sister we knew that she played in the wrong field and paid the price. So it was only a matter of fact that Nina would encounter a bit of the same conflicts. Some of the reveals show a bit of the horrifics that went on but most of these visuals are left to imagination This kind of formula much reminds me of films such as “Wolf Creek”, “Backwoods” and “Hills have Eyes“. 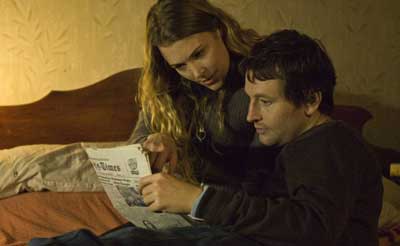 The protagonists encounter a culture that has existed in a certain way of life for quite some time and fight back to save there lives when they end up in there backyard. It doesn’t make for the situation right, although it brings to question the invasion of being somewhere where they don’t’ belong and aren’t welcome. As viewers we instantly assume the residents are backwoods and the visitors are the troublesome city folks. This may be true but the outcomes of the situations are a matter more of perspective. Which is a question of territory and ways of life. This wasn’t a bad film, though how much can you see before the formula gets old? I would say don’t expect much new, but Dying Breed provides a bit of thrills here and there.