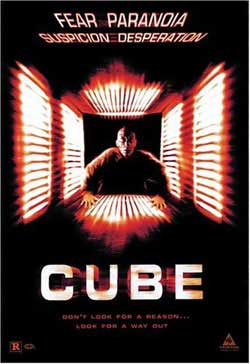 Six total strangers awaken one day to find themselves alone in a cubical maze. Once they meet, they work together using their given skills and talents to survive the deadly traps which guard many of the colored cubic rooms. Using Leaven’s mathematical skills, they press forward, upward, and downward through the hatches to try and find the outer shell.

Cube is undeniably original in its concept. In simple form, a group of 7 strangers wake up in a square room with no recollection why or how they got there. The room contains small square doors on all 4 sides which they can crawl through to get to the next room. Now in theory that sounds pretty boring, however cube festers on your psyche by indulging in a number of anxieties, fears and levels of human interaction. 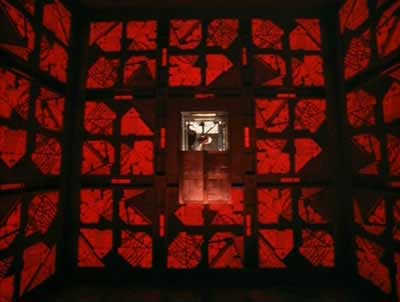 As the new residents of this futuristic construct attempt to plot and brain storm their escape, they encounter quite a few deterrents. Namely that each room may be booby-trapped with some sort of high tech fatality. This alone quickly reduces the number of occupants with traps that spit acid, chop one into pieces per razor wires, emit poisonous gases and a number of other undesirables. While each room appears to be safe, the traps are activated per high tech motion sensors.

On ya 1 more thing, Each room leads to another room that looks identical. The construct is actually made of hundreds of these rooms that can lead you in circles while you make your way though them. The added bonus is that that rooms are shifting location every so often. So the idea of just heading to the right until you get to the end is a mute point with this constant variable. While all these factors suggest a unsolvable situation, the individuals picked all have certain talents that can contribute to solving the cube. Certain factors such as room number coordinates present an opportunity for say a math wizard to figure out location points and “safe rooms”. As it is discovered with hundreds of identical rooms within, there is only 1 point of escape, 1 room, 1 time, and 1 location. Getting to it proves quite a challenge. 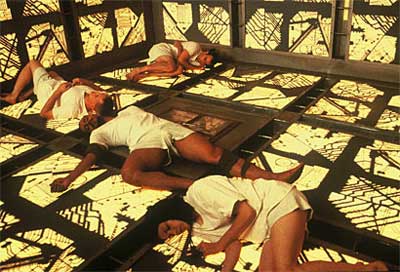 The situations are further troubled by a group of people facing potential death that have no answers, no reasons and no purpose as to why they were put there and by whom. While this can be fustrating to the viewers watching the film, the idea is rather unique and contributes to the mystery of the matter. Indeed this sings of science fiction but also is very much a horror and drama film. Each trap within brutally executes unlucky victims in great visual manner. For instance in the films interum a man climbs through a cube door and steps into the middle of the room only to face death per a grid of wires that literally chops him into 100 pieces.

The film Cube is not only a masterpiece of complex puzzle solving as it is as much a voyage of human interaction in isolation. With anxiety high, the captives are a threat to themselves as equally as the situation they are in. I believe this is a large part of this film’s appeal and premise. Critically acclaimed “Cube” went on to be a cult status movie that spawned the path for 3 more sequels. Each sequel revealing more of the “puzzle of the puzzle”.

I found my first “Cube experience to be disappointing in that I felt I didn’t get all the resolves that I would have liked. But like a fungus the film grows on you to the point of becoming a favorite. This fungus is fueled in future sequels with short doses of more insight on the Cube world and its makers. That alone is worth the watch to get insight on the complex storyline.

Cube was a remarkable achievement in the simple fact that the filmmakers only used 1 set, a repeated makeup of a large cube room made of sugested metal patterned walls containing doorways to crawl through on all sides of the room. Each portal large enough to open and crawl though 1 person at a time. The monotony was changed up by lighting each room with a different color also suggesting that the occupants were moving into different locations.

As it’s explained in the behind the scenes, the trick was to film the room from different angles and relight to suggest a enormous maze. In reality they were only going from 1room to the next and then repeated on camera to suggest this concept of movement. This was a great achievement for low budget filmmaking that kept cost minimal and still delivered a highly psychological engaging piece. 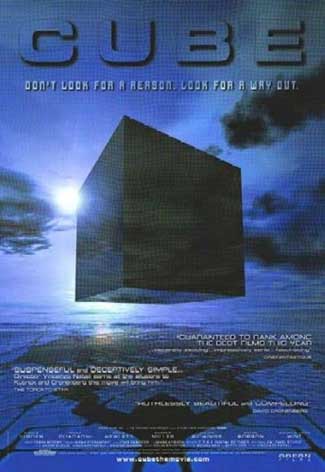 Cube is a highly fascinating piece that everyone should see at least once. If your like me then 1 cube movie won’t be enough as you hunger for more reveals, answers and complexities.