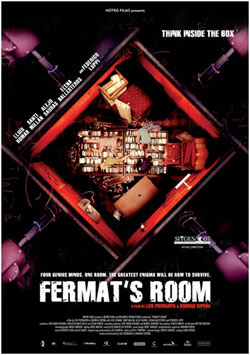 Four brilliant minds have been sent an invitation to attend a gathering. At the gathering the group of four is supposed to help solve a mathematic enigma, and essentially celebrate how brilliant they are. The four brilliant minds however soon learn that not only do they all know each other, but someone wants the four of them to die this night in a room that could only have been dreamt up by a twisted and sadistic mind.

“I return video tapes without rewinding them, I lie in electoral surveys. I take communion without fasting. I pick fruit without wearing plastic gloves. Could anyone hate me for things like that?”

Revenge motives go back way beyond film, Edgar Allan Poe captured revenge in a lot of his prose most notably the Cask of Amontillado. Like the short story Piedrahita and Sopena’s 2007 Spanish film Fermat’s Room is a twisted little tale dealing with revenge and the little emotion that causes the revenge in the form of jealously.

Fermat’s Room starts by introducing us to each of the four characters, although we really aren’t given any insight into their lives prior to getting an invitation in the mail. The only sight into their past lives we are given is that the young man who is nicknamed Galois is a brilliant young mind in college who returns to his dorm room only to find all of his research destroyed. The man who gets nicknamed Hilbert plays chess with his doctor and describes how being a mathematician is enough to drive a person to the brink of insanity. The character who becomes nicknamed Pascal studies his invitation thoroughly; each invitation has an enigma that must be solved in order to be invited to a gathering. Pascal stays in a library past closing and its only after the librarian requests that after she leaves he puts the books back into alphabetical order does he realize the answer to the enigma. The fourth main character, a girl nicknamed Olivia really isn’t shown until the group has met. As a viewer these opening scenes with the cast just lets you know that the four minds that are going to be meeting at this gathering are brilliant.

Each of the four solve the enigma and are sent a second invitation, this one comes with instructions on how to get to the gathering. The group of four is supposed to meet up at one in the afternoon in a clearing by a river. Each of the four are told that they are to leave their cell phones behind (excellent way to get rid of that one) and they are not to mention any of their past. Each of the four also is given a nickname, each being a famous brilliant mind in their own right. The four are told that nothing from their lives is to be brought up at the gathering and instead they should all focus on solving the great enigma that their host a man who calls himself Fermat has set up.
Pascal and Olivia are the first to arrive at their destination; Pascal sees Hilbert broken down on the side of the road and stops to give the older man a ride. Hilbert and Pascal pass the drive with some small talk, but the main thing discussed is that Hilbert knows who Pascal is because he has seen him on the cover of a magazine.

Finally all four are at their location when they suddenly see a flash of lights go off in the distance at the exact time they are supposed to meet. They find a boat and start to cross the river towards the light, the entire time most of the four are quiet but Hilbert keeps speaking up and actually throws out a riddle for the group to solve. This is the case through most of the film; Hilbert just seems overly excited (he says he has done one of these gatherings before) and speaks way more than the other characters.

When the group of four finally gets across the river they discover a car that is wired with a GPS and a PDA. The GPS has their destination already preprogrammed in so the group of four get into the car and head towards their destination. When they finally stop at their destination they realize that it is in fact an old abandoned warehouse, not really a place for scientific study. As the group explores the warehouse they suddenly find a room which is just as Hilbert describes from his previous gatherings. The room is exquisite and equipped with a library for research and a blackboard for writing out the enigma; a feast is also sitting on a table in the room waiting for the arrival of the group.

Pascal attempts to tell the group of brilliant minds that he has done some research on their host Fermat, but in his search he really discovered nothing. It is kind of an amusing piece of dialogue because the young man keeps building it up like he might know something the rest of the group doesn’t know, but really he knows nothing about their host at all.

It isn’t long after these discussions that their host does show up. After his arrival the group sits down to eat the feast, and once again Hilbert starts in wanting to get to work on the so called enigma right way. After the dinner is over some strange things begin to happen. Hilbert walks into a room and witnesses Pascal and Olivia kissing each other, so much for not knowing each other before the gathering. Fermat also suddenly receives a call on his cell phone. The group watches bewildered at the fact that their host blatantly asked them not to bring their phones and here their host is right in front of them talking on his. Fermat apologizes to the group after he gets off of his phone stating that he has to go to the hospital, his daughter is in a coma and he is pretty sure that it was the hospital on the other end of the phone. He apologizes as he leaves, forgetting his jacket in the room. Pascal quickly grabs the jacket and goes to chase Fermat out, however Fermat is on a mission to see his daughter and simply leaves the jacket behind also leaving his wallet.

Pascal takes his findings into the room with the rest of the three and suddenly pieces start to come together. The PDA goes off and there is a word problem presented, the group has one minute to solve the problem. The group of course takes more than one minute and realizes that the walls of the room are closing in on themselves, quickly they solve the enigma and the walls stop moving. Not even a few minutes after the first enigma is sent a second is sent and once again the group struggles to answer the riddle only to have the wall start to close in and block off the only exit out of the room. These brilliant minds had better put their collective heads together or the four of them are going to die tonight inside of a room that just seems to keep getting smaller and smaller.

I liked Fermat’s room a lot. The plot isn’t anything we haven’t seen before in the genre, in fact it is very similar to the film Cube. As the group of four struggles to learn more about their host they discover that their meeting here wasn’t just a coincidence and they are in fact being murdered. As the time goes on the riddles get harder and harder and the group struggles as it is revealed one at a time who each of them are.

There really isn’t any of the red stuff so the gore hounds will probably find this one to be a sleeper. Fermat’s room however is thick with atmosphere, as the walls close in on the group while they solve enigma’s it causes the lights to explode in loud blasts that got me almost every time it happened. This is a movie about revenge caused by jealousy and its twists and turns and red herrings constantly do keep the viewer wondering who is really responsible and why the events are going on.

Most of Fermat’s room takes place in the single location so what sells the movie is its dialogue. The cast handles this task very well. Alejo Sauras’s performance as Galois is the chuckle factor of the film. Galois keeps trying to think of ways to stop the walls from coming in and each time he gets hurt; the first time of course being the funniest as he attempts to press a piano against the wall only to be pushed onto the floor.

Fermat’s room is a great and intelligent thriller and should be enjoyed by all those who like their horror full of twists and turns and most notably revenge.