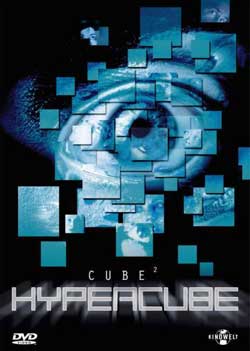 Eight strangers awaken with no memory and find themselves in a puzzling cube shaped room where the laws of physics do not always apply.

8 strangers end up in a square cube with doorways on all 6 sides. If this concept sounds familiar then you probably remember the debut film “Cube (1997)“. The Cube franchise would stack up to 3 films in total, this being the 2nd of the trilogy. I can’t say there won’t be more, but from viewing each of them I know that they all combine into giving us more answers about this crazy science fiction (and sometimes horror) franchise. This 2nd entry would be known as “Cube 2: Hypercube”. And before you call it out as just a cool sounding sequel name, there is a purpose to its title. 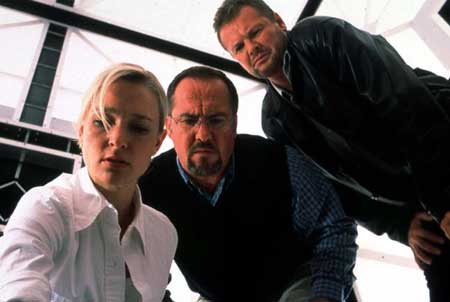 When we left off at the last film, we learned that the cube environment was the master mind of some dark unknown corporation for reasons also unknown. The first had rooms that offered high tech booby traps if one wasn’t cautious in entering. They changed lighting in each with a mix of red, blue, green, and such to differentiate. The cubes in “Cube 2” are all lit bright white. While one would assume that we are in for another 90 minutes of the same from the last film, they are only partially correct. This newly redesigned version is an advancement technology from the last, which simply ran on mathematical calculations. This version has rooms that appear and disappear almost instantaneous. This versions tweaks gravity and is based around the idea of a 4th dimension. Quantum physics majors would most likely embrace this scenario, but in simple form the foundation is that of a tesseract. 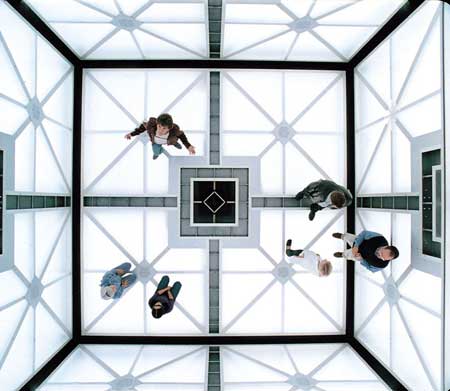 Now because I’m “not” a physics major, I felt best to rely on the wikipedia explanation of the “tesserac”

A generalization of the cube to dimensions greater than three is called a “hypercube”, “n-cube” or “measure polytope”. The tesseract is the four-dimensional hypercube, or 4-cube.

If that confuses you, it’s better to simplify the design of this cube as rooms that move between dimensions. Or as the lady puts it…”it’s all just a matter of time” (a hint for the 3rd act) 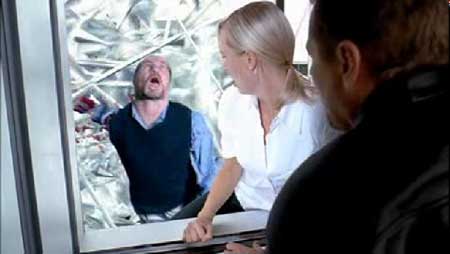 The captives differ in talents and backgrounds (much like the original Cube film) with each having a contributing skill important for solving the puzzle. We have detective Simon (Geraint Wyn Davies), the original designer of the doors engineer Jerry (Neil Crone), a general (who commits suicide), a blind girl Sasha (Grace Lynn Kung), a teacher with Alzheimer’s, Mrs. Paley (Barbara Gordon), psychotherapist Kate (Kari Matchett), a computer hacker game developer Max (Matthew Ferguson), and a party girl/lawyer Julia (Lindsey Connell). 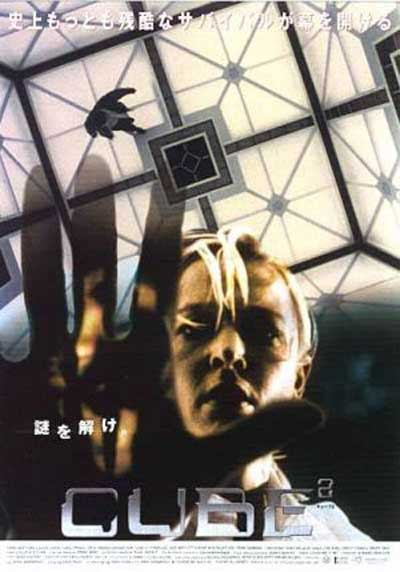 “Cube 2: Hypercube” has the distinction of a bigger budget with a new director behind it, Andrzej Sekula. The construct has been upgraded as well with a series of rooms that have the ability to distort time and move within each other

As the captives progress both within the cube and the film’s timeline, they begin to encounter all sorts of quantum anomalies. Rooms are discovered to work at variable speeds, at inter dimensional realities, with past to present crossovers. The group encounters weird objects that grow based on movement into complex tesserac based shapes that are able to slice a person into particles. And then their is the puzzle of an enigma named Alex Trust who works for a highly controversial weapons corporation named Izon. The intellectual pieces of the occupants of this cube and their relation to the cube (and its technology) emerge from discussions, revelations and even a bit of covert associations. A number becomes a puzzle that directly reveals the cube’s purpose – 60659. It’s a perfect mind screw of a film that won’t let you go till you ride it to finale.

“Cube 2: Hypercube” equates to a few things. For one, it’s a brilliant idea by using a complex quantum theory to its deign, it suffers many times from bad CGI (boxy early 90’s kind of graphics), and its a great isolation model film. It’s single purpose appears to be to illustrate a complex story that evolves from a mysterious organization bent on testing bizarre theories and situations.

My guess is if you made it thru Cube 1 and 2, your not going to sleep until you’ve taken on part 3 as well. The films originally were not created to be a trilogy, but were evolved due the original’s popularity “into” a trilogy. “Cube 2” actually took 6 years before it arrived as a release, leaving some less than impressed while others were just happy to see the original story expanded on a bit. It should be pointed out that you still won’t get “every” answer, but that cube 3 takes a different perspective that will give you some resolution. The glory of the Cube series is that its so abstractly redundant (room to room to room), that your science fiction hunger can’t help but be peaked. Whether flawed or not, I still recommend the entire series, with Cube 2 being one of the pieces into the complex Cube matrix.

It’s important to note a few things upon watching (or finishing for that matter). The cube is a tesseract that is closing in on itself as the occupants inside try and figure things out. We make some assumptions thru the details of each captive that they all had something to do with the cube, and are possibly all guilty in some respect. In any case, its an experiment, that also needs to eliminate the captives. The project is government-run and has been tested quite a few times (as we learn of the operatives). The function is based on quantum physics which bends time, space and perception. Quantum physics also deals with alternate universes and warping time. The film is created to be “somewhat ambiguous” so that the viewers have to discover details thru the watching of sequels. Izon is the weapons corporation that is funded by the government. 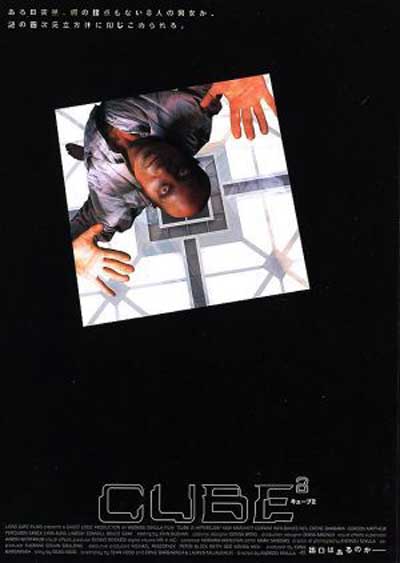 The Alternate ending:
The alternate ending is important to the film as it adds more detail to the rather abrupt ending of the release. As noted in Wiki: “The longer alternate ending included in the special features on the DVD reveals the “owners” to be the government; in the shorter version it is unclear who they are, but it is assumed they are Izon. Kate is executed in both versions, but she is praised for being the first operative to make it out alive. In the alternate ending it is revealed to Kate that she was in the Hypercube for just six minutes and fifty-nine seconds. It was an experiment used for quantum teleportation.